Benjamin Netanyahu has abandoned his attempt to form a new coalition in a development that plunges Israel into further political uncertainty.

President Reuven Rivlin gave him the first opportunity to form a government because he had the support of 55 politicians in the Knesset – one more than his main rival, ex-military chief Benny Gantz.

Mr Netanyahu, 70, had hoped to form a broad “unity” government with Mr Gantz of the Blue and White party.

However, on Monday evening Mr Netanyahu announced he had failed – two days before the deadline to present a coalition.

In a statement, Mr Netanyahu said: “Since I received the mandate, I have worked tirelessly both in public and behind the scenes to establish a broad, national unity government. That’s what the people want.

“To my regret, time after time he declined. He simply refused.” 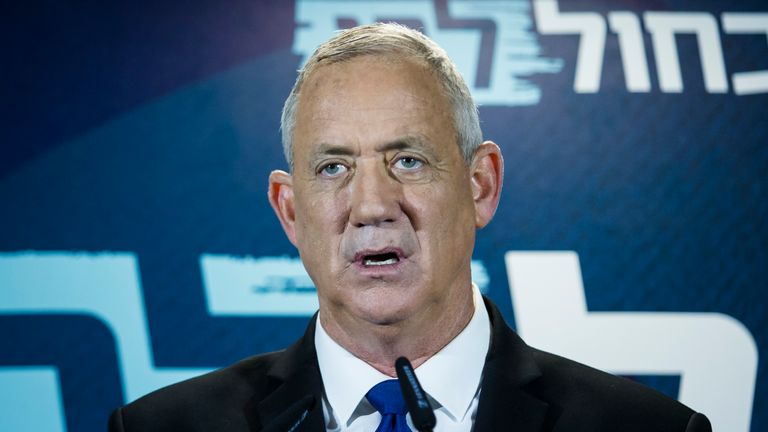 Mr Rivlin said he would give 60-year-old Mr Gantz a chance to form a government – and has 28 days to entice potential allies – but if Mr Gantz fails, Israel could hold its third election in less than a year.

Mr Netanyahu remains leader of the Likud party but having failed a second time this year to form a coalition and with Israel’s attorney general set to decide in the coming weeks on whether to indict him in a series of corruption cases, the country’s leader could come under heavy pressure to step down.

He is Israel’s longest-serving leader, having served from June 1996 until July 1999 and from March 2009 until now.

Because Israel uses a proportional representation model it has always been governed by coalitions.

This means the larger parties depend on smaller parties to form what is usually either a right-wing or left-wing governing partnership.

:: Sky News is broadcasting a Brexit-free channel, weekdays 5pm to 10pm on Sky 523