London: With his sensible suits, carefully planned public appearances and status as a future king, he does not bear any obvious hallmarks of a rocker.

But behind closed doors, Prince William likes nothing more than headbanging to AC/DC on a Monday morning. 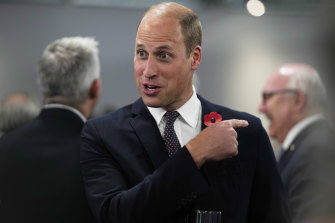 Prince William says he has listened to AC/DC’s Thunderstruck a million times.Credit:AP

The Duke of Cambridge, who has shared his favourite songs as part of a walking tour of his Norfolk neighbourhood, said there is “nothing better” for getting back into the “grind of the week” than some “heavy” rock music.

His children, he said, preferred the high-energy pop of Shakira, going “completely crazy” and shaking their hips in the family kitchen.

William has taken part in a special episode of Time to Walk for Apple Fitness+, taking listeners on a country stroll through the Sandringham Estate.

During the 28-minute audio show he shares fond family memories, from the mischievous royal children giggling in church at Christmas to sing-a-longs to Tina Turner with his mother and brother in the car on their way to school.

The “audio experience”, in which he at one point chokes up while talking about his experiences as an air ambulance pilot, gives listeners the most personal insight yet into life in the Cambridge family, and William’s own mental health habits.

He chose to record the Christmas special to showcase the positive effects of a simple walk, with Apple making a five-figure donation to each of three charities that help people suffering a mental health crisis.

The show invited William to suggest three of his favourite songs, with an explanation as to why he liked them.

He chose Tina Turner’s The Best, disclosing that it reminded him of his mother, Diana, Princess of Wales, singing along in the car to cheer him and Prince Harry up on their way back to boarding school.

“Sitting in the back seat, singing away, it felt like a real family moment,” he said. “My mother, she’d be driving along, singing at the top of her voice.

“And we’d even get the policeman in the car, he’d be occasionally singing along, as well.”

In a rare insight into life at Anmer Hall, the Cambridges’ Norfolk home, William said his two elder children, Prince George and Princess Charlotte, now engage in a “massive fight” most mornings over whose music will play at breakfast time.

In his role as mediator, he said, he makes them take turns each day, with both fortunately sharing a love for Shakira’s Waka Waka. 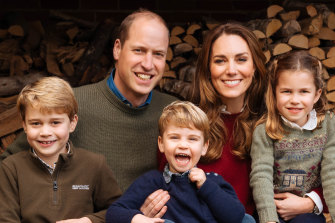 “She goes completely crazy with Louis following her around trying to do the same thing.”

Of his third choice, AC/DC’s Thunderstruck, he said: “There’s nothing better than, on a Monday morning, when you’re a bit bleary eyed after the weekend and trying to get yourself back into the grind of the week.

“I have to say the first time I put it on, and I’ve heard it a million times now, I was kind of like, ‘Well, this is quite heavy for a Monday morning.’

“But now, when I listen to it, it’s the best tonic for a Monday morning. It absolutely wakes you up, puts your week in the best mood possible, and you feel like you can take on anything and anyone.”

Addressing listeners, he added: “I’d imagine you’re going to walk quite fast listening to it, maybe with a skip in your step, with the head-banging.

“It’s a difficult song not to dance to or to nod along to.” William follows in the footsteps of his brother, Harry, in partnering with Apple. The Duke of Sussex has previously undergone a live therapy session as part of his mental health documentary with Oprah Winfrey for Apple TV+ in which he accused the royal family of “bullying him into silence”.

Prince William, instead, chose to share warm anecdotes about royal family life, from how his father, the Prince of Wales, tried to “force” his two reluctant sons out for a walk as children, only for him to appreciate it as an adult.

Taking listeners on a stroll past St Mary Magdalene church at Sandringham, reminiscing about trying to keep up with the pace of his grandfather, the Duke of Edinburgh.

“What’s very good about it is that we sit opposite each other as a family, and growing up, having my cousins sat opposite me has always been quite difficult to keep a straight face at times. I have had the giggles many, many times in the service. Luckily, no one’s filming it. So you can get away with it, and on Christmas Day, it’s fun to have a giggle and enjoy yourself.” 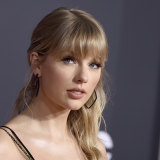 Urging people to embrace the occasional “making a fool of yourself” without worrying what other people think, he shared a self-deprecating anecdote about being persuaded to sing Jon Bon Jovi’s Livin’ on a Prayer live on stage thanks to pop star Taylor Swift. Saying he “cringed” at the memory, he joked: “Frankly, if Taylor Swift looks you in the eye, touches your arm, and says, Come with me’… I got up like a puppy and went, ‘Yeah, okay, that seems like a great idea. I’ll follow you’.”

William spoke movingly about his most difficult experiences on the front line as an air ambulance pilot, choking up as he recalled meeting the family of a young person his team had saved after a being suddenly “hit” by the trauma of the things he had seen.

He also spoke of the experience of “mucking in” to work with conservationist Ian Craig in Kenya, saying he learnt about the importance of the engaging “hardest-to-reach” communities in solving critical environmental problems.

The Prince’s Time to Walk episode will be available on Apple Fitness + from Monday.