Stephen Colbert visited the Pacific country last month and is screening segments from the trip on The Late Show. 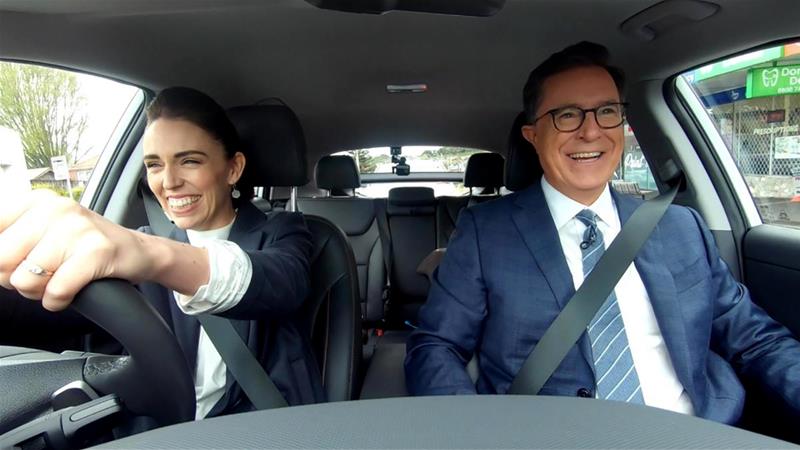 New Zealand Prime Minister Jacinda Ardern turned tour guide for US talk show host Stephen Colbert, driving him from Auckland airport to a barbeque at her home in a stunt hailed as a coup for the Kiwi travel industry.

Colbert visited the South Pacific nation last month and is screening segments from the trip this week on The Late Show beginning with his meeting with the centre-left New Zealand leader.

It showed Ardern picking Colbert up – in an electric vehicle, naturally – and the comedian expressing concern his presence may be eating into her “executive time”.

She also joins in a spoof of Colbert’s fellow talk-show host James Cordern’s carpool karaoke as the pair sing Queen’s Bohemian Rhapsody during their drive – despite Colbert warning they could get into trouble.

“Do not even think about singing along with the radio if a song comes on that you like,” he tells Ardern before she joins him in a rendition of the classic hit.

“That’s James Cordern’s thing and that guy is mobbed up with lawyers.”

They also fired up the barbecue “for a New Zealand state dinner of sausages and white bread” at Ardern’s Auckland home, with singer Lorde attending.

Ardern has appeared as a guest on Colbert’s show twice, and each time invited him to visit New Zealand.

The American, who describes himself as an admirer and personal friend of Ardern and also a keen fan of the Kiwi-shot Lord of the Rings movies, said it was something he had always wanted to do.

Some local pundits have criticised the 104,000 New Zealand dollars ($67,000) the government spent to host Colbert and his crew, but Tourism New Zealand said it was a bargain.

It estimated that paid advertising promoting New Zealand as a destination on a network show in the prime US market over the course of a week would cost almost 50 times that amount.

“The investment versus the return is significant and we were over the moon to get the support of so many Kiwis like the prime minister and some other famous faces to help make it pretty special,” TNZ chief Stephen England-Hall said.