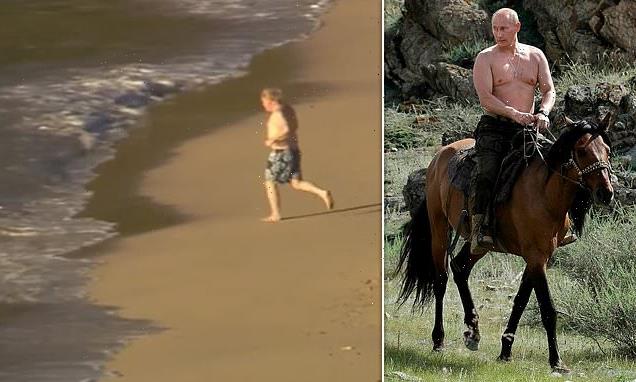 It would be ‘disgusting’ to see Boris Johnson naked, says Vladimir Putin as he hits back at Prime Minister’s jab about his penchant for posing topless and mocks G7 leaders’ lack of machismo’

Vladimir Putin has hit back at western leaders who mocked his athletic exploits, saying it would be ‘disgusting’ if Britain’s Boris Johnson tried to emulate his topless appearances in front of the cameras.

Speaking during a visit to Turkmenistan, the Russian president also taunted his advisories over their ‘lack of machismo’ – when asked about western leaders joking about him at the G7 summit on Sunday.

As they sat down for talks amid tensions over Moscow’s brutal invasion of Ukraine, Johnson jested that G7 leaders could take their clothes off to ‘show that we’re tougher than Putin’.

‘Jackets on? Jackets off? Shall we take our clothes off…?’ the British leader said while bantering with the other leaders. ‘We all have to show that we’re tougher than Putin.’

Putin, 69, hit back during the summit today, body shaming his foes and telling reporters: ‘I don’t know exactly how far they wanted to get undressed, above or below the waist. But I think, either way, it would be a disgusting sight.’ 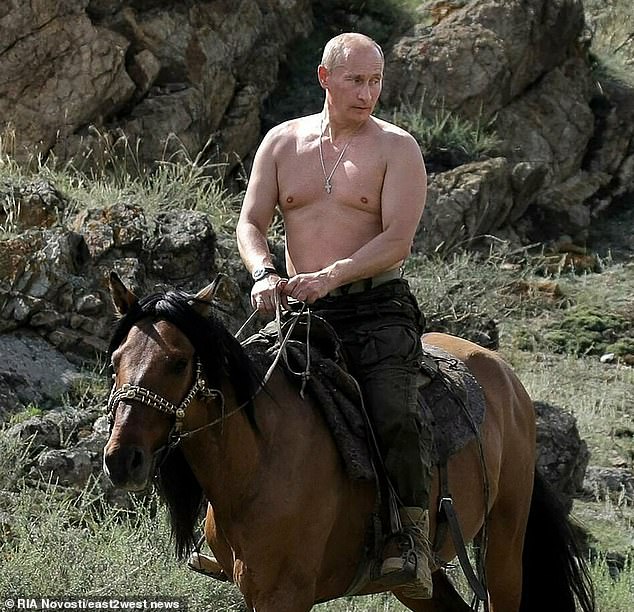 Vladimir Putin has hit back at western leaders who mocked his athletic exploits, saying it would be ‘disgusting’ if Britain’s Boris Johnson and other Western leaders tried to emulate his topless exploits. Pictured: A bare-chested Putin is seen in 2009 riding a horse 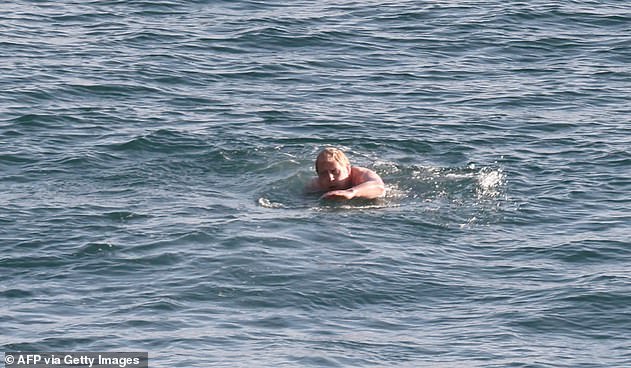 Boris Johnson rose early to fit a morning swim and a jog at the Carbis Bay location ahead of G7 talks last year. Pictured: The Prime Minister is seen swimming on June 12, 2021 in Cornwall

He claimed that, unlike him, Western leaders abused alcohol and did not do sports to keep in shape.

Putin, who claims to be a a martial arts black-belt and fitness fanatic, said: ‘Recall Pushkin…who said: ‘One might be all about business, yet still take care of the beauty of one’s nails. I certainly agree with that.’

He noted that to look good ‘it’s necessary to stop abusing alcohol and other bad habits, do physical exercise and take part in sports’.

‘The [Western] colleagues you mentioned, I know them all personally. This is not the best period in our relations, this is understandable.

‘Yet they are all leaders, so they would achieve success if they wanted to. But they must work on themselves.’ 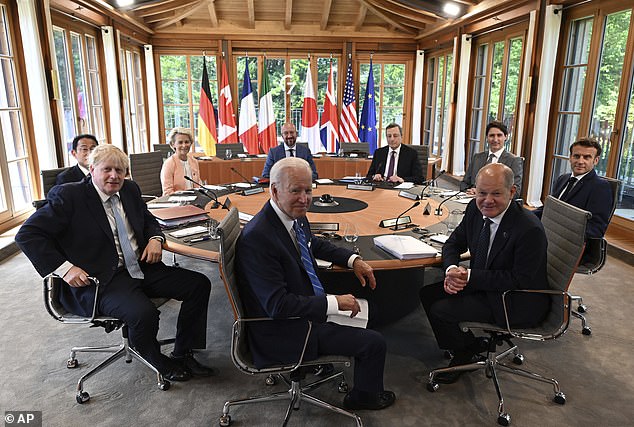 As they sat down for talks amid tensions over Moscow’s brutal invasion of Ukraine, G7 leaders joked about taking their clothes off to ‘show that we’re tougher than Putin’ 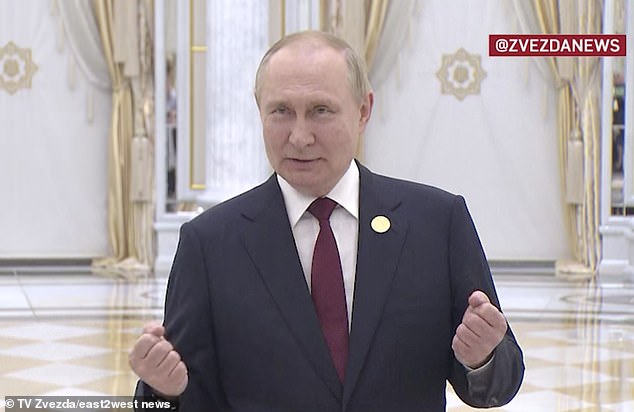 Putin, 69, hit back at a summit in Tajikistan (pictured), body shaming his foes and telling reporters: ‘I don’t know exactly how far they wanted to get undressed, above or below the waist. But I think, either way, it would be a disgusting sight’ 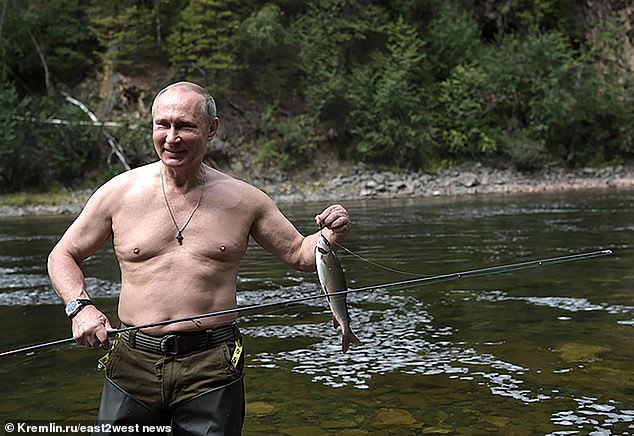 Pictured: A bare-chested Vladimir Putin is seen having caught a fish in 2017

Putin was responding to a reporter’s question in Dushanbe who asked: ‘The G7 summit in Germany was about ‘How to punish Russia more painfully’, with jokes about your, excuse me, naked torso.

‘The Canadian Prime Minister said: ‘Let’s take off our jackets and be cooler than Putin’. Did you happen to discuss anything similar here at the Caspian summit?

‘Also, Boris Johnson said that if Russia’s president were a woman there wouldn’t be any war. How do you feel about that in general?’

Putin also denied his missiles had targeted a Ukrainian shopping mall in what has been labelled a terrorist strike and a war crime in Kremenchuk.

Since Putin ordered his forces into Ukraine, Moscow has insisted it has not targeted civilians, despite vast amounts of evidence on the contrary.

Russian forces have bombed civilian sites indiscriminately, and there have been several instances where Ukrainians have been shot, tortured and raped.

‘I know, and we said it many times, we showed it, it was obvious from drones, that they place weapons, artillery in living quarters,’ he claimed.

‘We don’t shoot just to shoot.

‘As a rule, it is done at targets checked by intelligence, and I am certain exactly the same was in this case.

‘They hide equipment, specially [arms] delivered from the West in various hangars, markets, at factories and workshops where they repair and prepare the equipment after lengthy delivery from abroad.

‘The Russian army does not hit any civilian sites. There is no need,’ he claimed.

‘We have every capacity to figure out the locations of everything, and with our high-precision long range weapons we reach these targets.’ 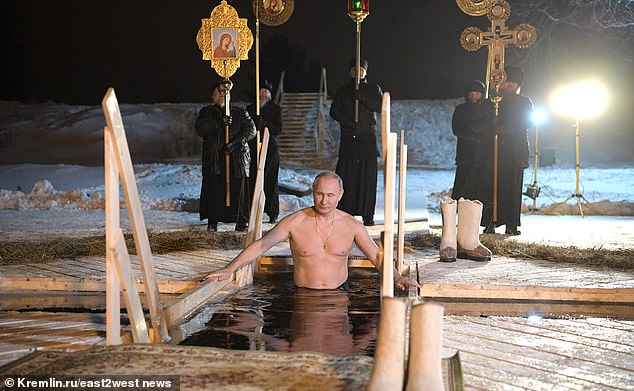 Pictured: A topless Vladimir Putin is seen taking an epiphany plunge in Lake Seliger in 2018 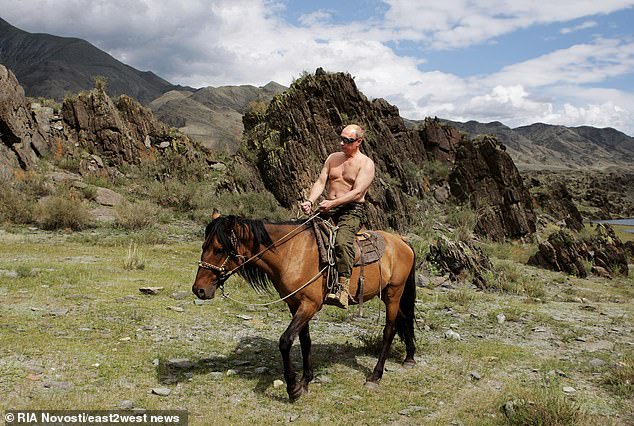 Russia also hit back today at Mr Johnson’s claim that a woman would not have started Putin’s bloody war in Ukraine.

The British leader had claimed the Kremlin leader had ‘toxic masculinity’ in spades.

‘If Putin was a woman, which he obviously isn’t, but if he were, I really don’t think he would’ve embarked on a crazy, macho war of invasion and violence in the way that he has,’ Johnson told German broadcaster ZDF on Tuesday evening.

Putin’s invasion of Ukraine is ‘a perfect example of toxic masculinity’, he said, calling for better education for girls around the world and for ‘more women in positions of power’.

But Putin, speaking in the Turkmenistan capital of Ashgabat, dismissed Johnson’s comments as ‘incorrect’.

‘I’d like to point to events in modern history when (former British prime minister) Margaret Thatcher decided to launch an offensive against Argentina for control of the Falkland Islands’ in 1982, he said.

‘There, a woman decided to start a war,’ which ended in British victory the same year, the Russian leader said.

Kremlin spokesman Dmitry Peskov also responded to Johnson’s comments by telling state news agency RIA Novosti that ‘good old (psychoanalyst Sigmund) Freud would have loved having in his lifetime such a subject for his research’.

‘What have the 7 been doing together?’, she wrote on messaging app Telegram, referring to a recent gathering of the Group of Seven leaders in Germany. 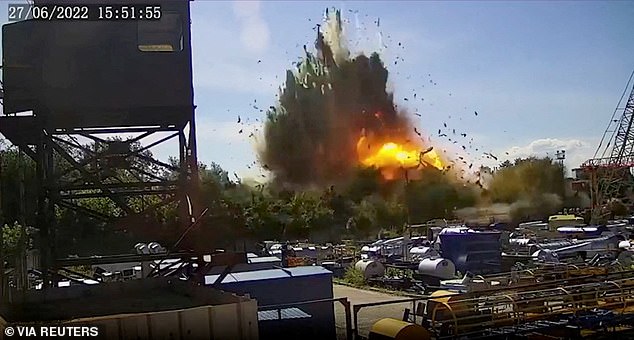 Putin also denied his missiles had targeted a Ukrainian shopping mall in what has been labelled a terrorist strike and a war crime in Kremenchuk. Pictured: 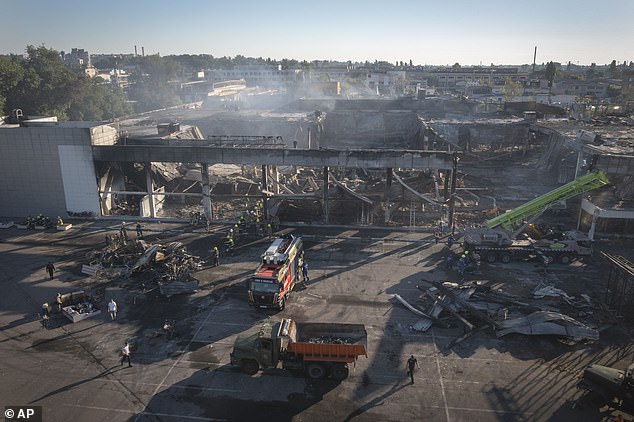 Leading cheerleader Vladimir Solovyov posted: ‘Hi to Boris Johnson, who said that Vladimir Putin would not have started a special operation if he was a woman.

‘Boris seems to have specific (gender) attributes, but it’s hard to call him a man.

‘More likely he is a political transgender.

‘Amazing that the last man in British politics was a woman.’

‘President Putin, even a long way away from [Boris] Johnson, haunts the British Prime Minister,’ she said.

‘After G7 summit participants rejected his offer to undress and show Putin his pectoral muscles, Johnson said – and this is no joke – that Russia’s war against Ukraine would not have happened if Putin, as Johnson fantasises, had been a woman.

She told viewers: ‘I guess we can assume that chubby Boris with a woman-like figure – we saw those weird photos of him – is just jealous of the Russian president, who is in good shape.

‘Boris is putting his complexes on display for all to see. And Johnson may continue his alcoholic parties. We know he’s got such a [habit].

‘At the NATO summit he had a drink and said some foolish things.

‘[Putin’s spokesman] said about Johnson’s words that Freud would have dreamt of having such a patient. Of course, it is impossible not to agree with him.’

Vladimir Kornilov, a political scientist, said: ‘The reaction of the British to all these events is more shocking every day.

‘They are more and more blunt, they say it bluntly that we have to beat Russia.’

Foreign Secretary Liz Truss had said the priority was to beat Russia, he said.

‘They don’t even speak about Ukraine any more,’ he said. ‘Not ‘Ukraine has to win’, it won’t win, we all understand that. But we have to win into matter what.

During the ZDF interview, the British prime minister also acknowledged that ‘of course people want the war to end’, but for the moment ‘there’s no deal available. Putin isn’t making an offer of peace’.

Western allies must support Ukraine to enable it to be in the best possible strategic position in the event that peace negotiations with Moscow do become possible, he added.