The home that engineer Richard Keech and his family bought 20 years ago was – like many in Melbourne – an energy efficiency nightmare: poorly insulated, draughty and expensive to heat and cool.

When Keech read former-US-vice-president Al Gore’s An Inconvenient Truth, released with the film of the same name, he had a "green epiphany", returning to uni to study energy efficiency and embarking on a career in the field. 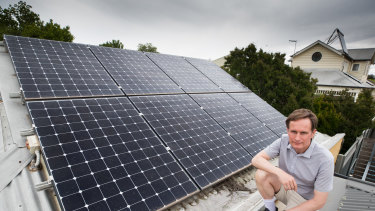 Richard Keech has made substantial energy efficiency upgrades to his home.Credit:Jason South

They now use 75 per cent less energy, get a $9 credit each day on their electricity bill and generate more energy than they use.

"My key message is that it’s a reasonable goal for homes to be net energy positive – generating more energy than you consume," Mr Keech said.

Ahead of the Victorian budget, environment groups are urging the Andrews government to focus post-pandemic stimulus spending on a "green" recovery to drive the state’s battered economy out of recession.

And it's energy efficiency measures, for homes like Mr Keech's as well as government buildings, that usually top the stimulus list.

Proponents claim this sort of investment would create jobs, often in regional areas, as well as boost renewable energy and accelerate the transition away from fossil fuels in the face of increasing climate change.

The Victorian Trades Hall Council also wants a "just" transition, one where workers are at the centre of any change so their interests are not harmed by a poorly-managed transition.

There's wide global support for a green role in the recovery. The United Nations has pushed the idea as has US president elect Joe Biden and countries like Denmark, Germany and South Korea.

This week a Greens motion calling on the Andrews government to support a Green New Deal, similar to that pushed by some American Democrats, passed the upper house of Parliament.

Making buildings more energy efficient might not have the same public cache as big batteries or shiny new wind turbines but Energy Efficiency Council spokesman Rob Murray-Leach said it was a no-brainer: "Before you pour more water into a bath, you need to put in the plug."

"It’s far and away the most jobs-rich area of green stimulus."

But she urged Victoria to go further, pointing out that NSW this month revealed it would embark on the most ambitious renewable energy drive in the country aimed at attracting $32 billion in private investment to create "renewable energy zones" in three regional areas.

"Victoria, like the ACT, has played a strong leadership role around the clean energy transition but we’re seeing a whole lot of other states step up and leapfrog them," she said.

"There’s a lot more that could be done, including commitment to renewable energy zones and upgraded transmission."

Green groups like the Climate Council and the Clean Energy Council have also called for the development of a renewable hydrogen hub and funding commitments so the Portland aluminium smelter could run on clean energy.

"A lot of work needs to be done to reverse the decline of our natural spaces – the ecosystems that underpin our agriculture and our broader economy," he said.

Environment Minister Lily D'Ambrosio said the government would have more to say about new energy investments that help households, businesses and communities in the upcoming budget.