Mother of two Felicity Miller struggled to find words to comfort her daughter as the pair laid down a bouquet of yellow flowers outside Hillcrest Primary School on Friday in memory of Amelia’s school friends.

Amelia had been at the school celebration where five students were killed in a jumping castle tragedy on Thursday.

“It’s just traumatic, really traumatic,” her mother said on Friday. “No parent should have to go through this, nor should a family either.” 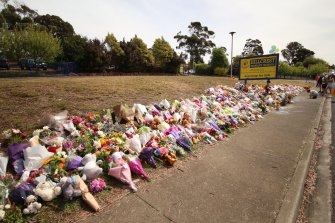 Flowers and soft toys adorned the school’s welcome sign in a growing makeshift memorial as strangers embraced each other on the street.

The air was crisp and still, just like it was on Thursday when a sudden gust lifted the castle and several inflatable ‘zorb’ balls 10 metres into the air during the school’s end-of-year party, causing nine children to fall to the ground below.

Despite a quick response from emergency crews, five of the children injured in the incident — Addison Stewart, Zane Mellor, Jye Sheehan, Peter Dodt, and Jalailah Jayne-Maree Jones — could not be saved. Three others remained in a serious condition in hospital on Friday and one was recovering at home.

As the early morning sun began to filter through Lawrence Drive on Friday, scented candles, dolls and cards blanketed the school’s front lawn. Some cards sent messages of love and strength to the families, friends and teachers of the victims; others simply read “rest in peace”.

“I bought a Care Bear and I put it to the angels to take the children somewhere where there’s happiness, laughter, and love,” local Sandra Maney said.

Ms Maney’s children do not attend Hillcrest Primary, nor are they friends with the students killed in the tragedy but for her and many others, paying their respects was a form of coming to terms with what happened.

The incident is the darkest event to rock the coastal community since the massacre of Port Arthur took place 300 kilometres south in 1996.

As one local put it: “It sent a shock through the system because these kinds of things just do not happen here.” 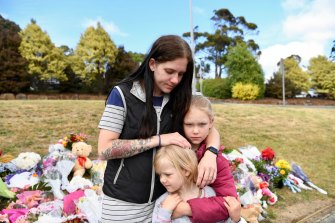 In a small community like Devonport, where everyone knows everyone, grief is hard to escape.

Some said they had been engulfed by the sorrow; others felt in a daze, unable to comprehend how the incident unfolded. They all agreed it would be a long time before Devonport recovered, if it ever did.

“It’s going to be an unfortunate memory that’s going to be embedded in the school for years. You just can’t take that away,” local truck mechanic Nathaniel Whiteley said.

“My whole heart just sank [when I heard the news] and I got cold shivers through my body. It’s just so sad to hear.”

Churches, community centres and family groups have opened their doors to local families in need of support and a quiet space to grieve, while chaplains and counsellors have been stationed at Hillcrest Primary to console mourners.

A silent vigil was also held at the church Our Lady of Lourdes from 6pm on Friday. The parish said it expected a large crowd.

Meanwhile, locals like April Norris will hug their loved ones close at night.

“I’m going to see my granddaughter and I’m just going to hug her. You just gotta.”