‘It’s the worst pain I’ve ever felt’: Paddy Doherty tells of prostate cancer battle as he urges men to check themselves because he was ‘too proud’ to tell his wife for four months

Former bare-knuckle fighter Paddy Doherty, star of My Big Fat Gypsy Wedding and Celebrity Big Brother, has said the pain of prostate cancer was the worst thing he has ever experienced.

The burly traveller opened up about his cancer – treated with an operation last week – to Ben Shepherd and Kay Galloway on Good Morning Britain this morning and urged men to get checked.

Paddy said: ‘Travellers are innocent, we won’t tell our wives we won’t tell no-one. Like Asian people and black people we’re very proud people. I had it four months before I told my wife,’ he admitted.

He spoke about the excruciating pain of having an enlarged prostate before his surgery, saying: ‘When you go to the toilet and you have a wee, it’s so bad, it’s so painful. 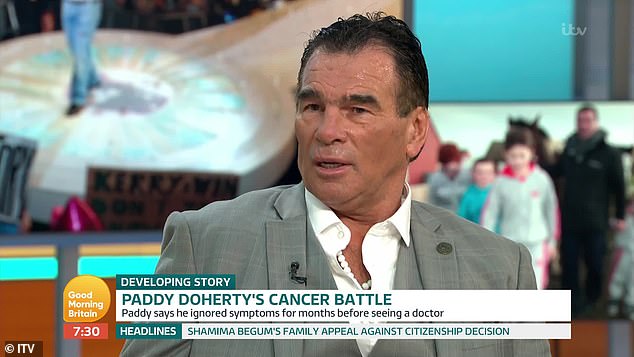 This morning Paddy told male viewers to get themselves checked, opening up after his prostate cancer 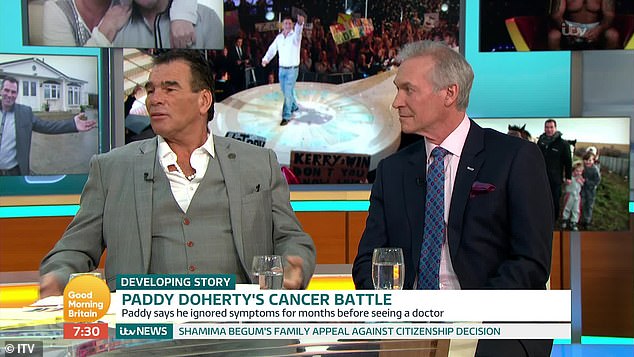 He refused to tell his wife about his diagnosis for four months, even though it was at her insistence he went to the doctor

Prostate cancer: what are the signs and how is it treated?

The signs to look for

Symptoms of prostate cancer do not usually appear until the prostate is large enough to affect the tube that carries urine from the bladder out of the penis (urethra). When this happens, you may notice things like:

These symptoms should not be ignored, but may indicate an enlarged prostate, not cancer.

How do you know?

The most common tests are:

How is the cancer treated?

All treatments carry side-effects including erectile dysfunction, so treatment is not always recommended if the cancer is early stage.

‘I’m not just saying it – you’d have to be evil to wish it on anyone. It’s the worst pain, the former bare-kuckle fighter told the presenters, adding that at one point he started passing blood.

He said the doctor sent him straight to hospital, but at that pint Paddy did not know what a prostae was.

‘That’s how foolish I was, do you know what I mean?’ he said.

‘They said “you’ve got cancer”, that’s when the penny dropped.

But he was alone at the hospital, and swore to himself ‘I’m not gonna tell anyone, not gonna tell my children’, and went back home simply to tell his family he has something wrong with his prostate, which doctors were treating.

He went on: ‘I lived with that for about three to four months, it was winding me up, I was looking for drink, and being a bit angry with everyone. 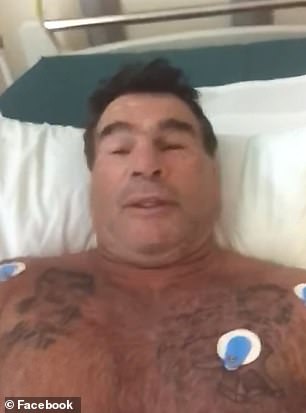 ‘I went back to the doctor I said I’m taking my steroids and banging them, he said “oh, you’re supposed to have one side effects”.

Last week he had a five-and-a-half hour operation at the Manchester Royal Infirmary  but afterwards said that while he was in ‘horrendous pain’, he was feeling better having been told by doctors he will be completely fine once he recovers from the two delicate operations.

This morning he told viewers ‘don’t put your pride in front’ adding that men should check themselves regularly, ‘like a woman checks herself’.

After his appearance on the hit TV show, My Big Fat Gypsy Wedding, Mr Doherty won over a swathe of fans who have inundated him with messages of support since he went public with his condition.