Jakarta: Jailed Australian filmmaker James Ricketson has been taken to a Cambodian prison hospital after falling ill while sharing an over-crowded cell with more than 100 prisoners.

The news prompted Ricketson's family to call on Canberra to intervene and help secure proper medical treatment for him. 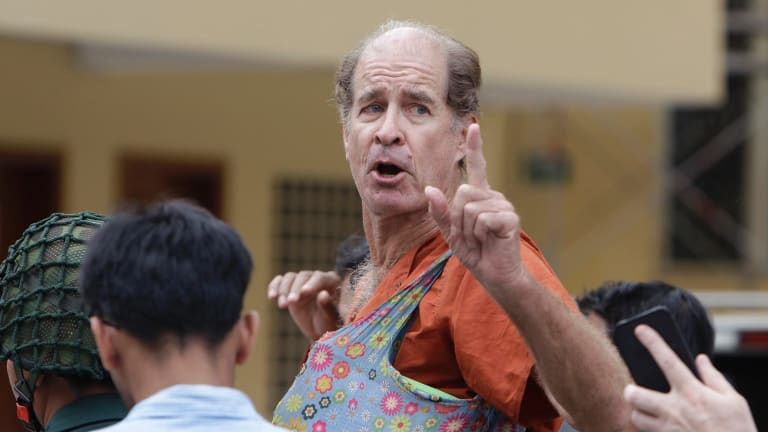 Australian filmmaker James Ricketson gestures as he is escorted by prison guards in January.

Ricketson, 69, was jailed 11 months ago by Cambodian authorities and still awaits a trial date.

He was arrested after flying a drone over a rally staged by the opposition Cambodian National Rescue Party on Phnom Penh's riverfront.

He has been accused of spying against Prime Minister Hun Sen's government, a charge his supporters describe as ludicrous.

Ricketson has been ill for several weeks and has been moved to the Prey Sar prison hospital, but no diagnosis has been made. Conditions in the prison are notoriously bad.

His son Jesse Ricketson, who has relocated to Cambodia, told Fairfax Media that his father was not in a good way and that as the hot season approached,  without proper treatment, he would likely get worse.

"He has some kind of chest infection, it is not diagnosed. We don't know if it's tuberculosis, pneumonia, or maybe something else. And he has a whole lot other complaints because of conditions in his cell. The inmates can't even lie down, the cell is so full," he said.

"He had one x-ray taken but no diagnoisis was made so we are pushing for another hospital visit and a proper medical check-up. At least in the prison hospital he can lie down, but that's all it gives him."

The younger Ricketson said the Australian embassy in Cambodia had been helpful in securing the first appointment with a doctor but that appointment was "kind of a fail, so we need their help again".

"We need them to keep the pressure on the prison and the local authorities."

In a letter to James Ricketson back in March, Australian Ambassador Angela Corcoran told the him he would not receive extra assistance and that he should be "realistic" about how much help the Department of Foreign Affairs and Trade could provide.