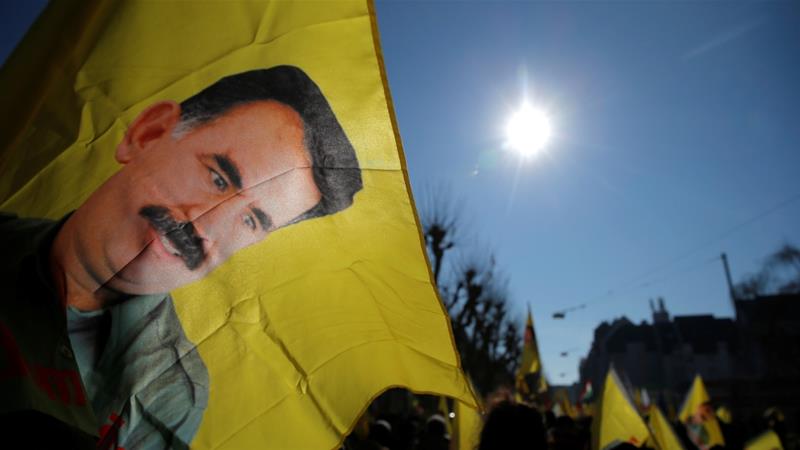 The jailed leader of the outlawed Kurdistan Workers Party (PKK) in Turkey has called on the Syrian Democratic Forces (SDF) to pursue solutions in Syria other than through conflict, in a rare statement read by his lawyers.

Abdullah Ocalan, who has been jailed in Turkey for more than 20 years, also called on the SDF to take Turkish sensitivities in Syria into consideration, his lawyers said.

“We believe that, within the scope of the SDF, problems in Syria should be aimed to be solved by staying away from a culture of conflict, with constitutional assurances given within the framework of Syria’s territorial integrity,” the statement by Ocalan and three other PKK leaders said.

The SDF is spearheaded by the People’s Protection Units (YPG) fighters, and backed by the United States.

It played a key part in the removal of the Islamic State of Iraq and the Levant (ISIL or ISIS) fighters from the vast majority of the territories it captured in Syria and Iraq since 2014 and Washington has defended its alliance with the group.

However, Ankara considers the YPG and its political wing, the Kurdish Democratic Union Party (PYD), “terrorist groups” with ties to the outlawed PKK. It has waged a war in Turkey since the 1980s, fighting for an autonomous Kurdish state.

Turkey and the Syrian fighters it backs carried out an operation in the northwestern Syrian region of Afrin in January 2018 and captured territory there from the SDF.

Turkey demands the total removal of the SDF from its border with Syria. The group controls the country’s northeast.

Two of Ocalan’s lawyers, who read the statement during a news conference, said it has been eight years since they had been allowed to see him. The meeting took place on May 2.

“This is the first meeting with the lawyers since 2011. The meeting lasted approximately one hour,” Rezan Sarica told an Istanbul press conference.

Some 3,000 Kurdish prisoners have been holding hunger strikes since November to protest Ocalan’s isolation and demand improved conditions for him, and eight have killed themselves over the issue, according to the pro-Kurdish People’s Democratic Party.

Nevroz Uysal, another of Ocalan’s lawyers, said the imprisoned leader wanted the hunger strikers to limit their protests.

“We respect the resistance of our friends inside and outside prisons but want them not to carry this to a dimension that will threaten their health or result in death,” Uysal quoted Ocalan as saying.

Turkey captured Ocalan, then public number enemy one, in February 1999 and imprisoned him on the heavily fortified island of Imrali off Istanbul where he has been kept for 20 years.

The PKK is blacklisted as a “terror” group by Ankara, NATO, the US, the United Kingdom and other Western allies. The conflict has claimed more than 40,000 lives since 1984.

President Recep Tayyip Erdogan has hardened his rhetoric towards Kurdish rebels since the last ceasefire broke down in 2015, reducing the odds of a political solution to the long-running conflict.

Ocalan’s brother, Mehmet, was permitted to visit him in prison in January for the first time since 2016.

Ocalan had been sentenced to death for treason after his capture by Turkish agents in Kenya, but this was commuted to life imprisonment when Turkey abolished capital punishment in 2002 at a time when it appeared close to securing membership of the European Union.