James Comey says it ‘looks like’ there is enough evidence to charge Trump, claims it’s possible Russia has leverage over the president and insists it’s Republicans who have ‘everlasting shame’ for their silence on meddling in 2016 and not Obama

Former FBI Director James Comey has said he believes Donald Trump could be charged with obstruction of justice when he leaves the White House based on the findings of the Mueller report.

Comey sat down with Anderson Cooper at a CNN town hall in Washington, DC, on Thursday night, exactly two years to the day after he was fired by the president.

The former FBI head made it clear that there is no love lost between him and President Trump, whom he described as a ‘chronic liar’ who on more than one occasion displayed a ‘corrupt intent to interfere’ with the Russia investigation, which he helped launch.

He said he wasn’t surprised by any of the information laid out in Robert Mueller’s report as he praised the special counsel for his handling of the entire process. 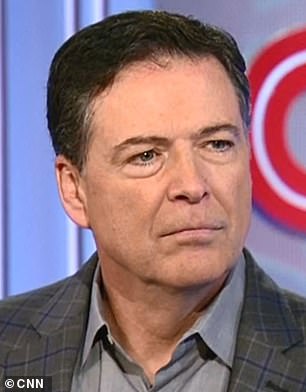 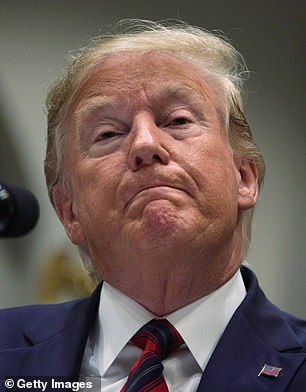 Former FBI Director James Comey shared his personal conclusions from the Mueller report at a CNN town hall on Thursday. Comey, who was fired by President Donald Trump two years ago to the day, made it clear there is no love lost between him and his old boss

Cooper kicked the discussion off by asking Comey about what it was like to learn that he’d been removed from his post from a CNN report rather than from his former boss.

The FBI head said that when he first saw the words ‘Comey resigns’ flash across the TV screen while he was in a meeting, he thought it was ‘probably a prank’.

That banner was quickly amended to say: ‘Comey fired.’

‘I was numb because I didn’t expect to be fired,’ Comey said at the town hall. ‘It never entered my mind. I knew by that point the president didn’t like me, but I thought that’s okay because that will keep a separation.

‘It still feels a little bit numbing, frankly, like it happened yesterday and a lifetime ago.’

Comey said he finished up the meeting before calling his wife and then his assistant, who confirmed that a termination letter from Trump had been delivered to the FBI in Pennsylvania.

The day after Comey was axed, Sanders told the press that ‘countless’ members of the FBI had expressed a loss of confidence in their leader.

The Mueller report revealed that Sanders later acknowledged that the comment was a ‘slip of the tongue’ and ‘in the heat of the moment’.

Comey said Thursday: ‘I wasn’t shocked, I knew it was a lie when it was first said at the time. And it was I guess gratifying to see the special counsel have her admit that it was.’ 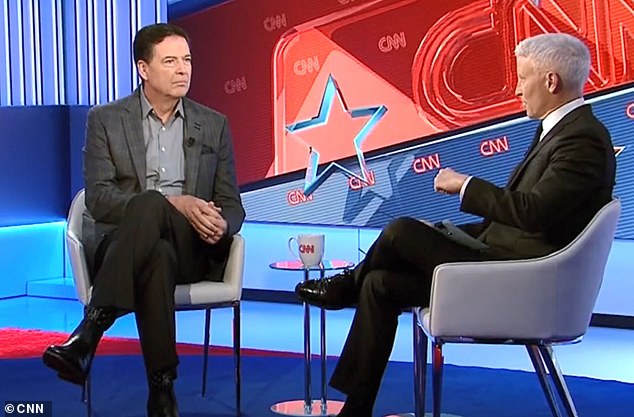 Cooper went on to mention comments Trump had made about Comey hours earlier.

The CNN host asked: ‘Is Mueller in love with you?’

‘I respect him,’ Comey said before laughing as he added: ‘I don’t think we have that kind of relationship. He’s certainly not obsessed with me in the way some others seem to be.’

The conversation then shifted to the findings of the Mueller report, which Comey said did not surprise him.

‘There were a lot of facts in the Mueller report that I didn’t know, but I knew it would be high quality work if we got a chance as a country to read it,’ Comey said.

‘And what he describes about Russia’s intervention in our election didn’t surprise me at all. It confirmed what I knew from when I was at the bureau. And what he laid out about the president’s efforts to obstruct justice was broader in scope than I personally knew, but given what I had seen, it didn’t surprise me, honestly.’

He said that he felt the parts he was featured in were accurate before Cooper probed whether he felt that the report vindicated him ‘because some of the things that President Trump said you were lying about, Mueller backed you up and said that they weren’t lies’.

President Donald Trump on Thursday claimed Robert Mueller was ‘in love’ with former FBI Director James Comey but noted he’d leave it up to Attorney General Bill Barr whether the special counsel should testify before Congress as Democrats are threatening a subpoena.

‘Bob Mueller’s no friend of mine,’ the president told reporters at the White House on Thursday.

‘We had somebody that is in love with James Comey,’ he charged of Mueller.

Mueller and Comey had overlapping careers at the Justice Department. Comey was deputy attorney general during the George W. Bush administration when Mueller served as FBI director.

Comey responded to Trump’s remarks about his relationship with Mueller during Thursday’s town hall, jokingly saying: ‘I don’t think we have that kind of relationship.’

He added: ‘He’s certainly not obsessed with me in the way some others seem to be.’

Cooper then asked if Comey accepted the president’s repeated claims that the Mueller report found no collusion, to which he responded: ‘Well, that’s actually not what the report says.

‘Mueller says first of all, as you know, Anderson, collusion is not a term that lawyers use or should use. He found there was not sufficient evidence to charge a conspiracy between Americans and the Russian effort. That strikes me as a reasonable conclusion, and I accept it.’

Comey replied: ‘Yes. No doubt in my mind. But that doesn’t mean I’m against review of it. That’s totally fine.’

He added that if anything inappropriate is found, the FBI ‘should be transparent about it’.

‘I’m a big believer in the truth. If the truth was there was something concerning, then let’s hear it. I don’t know of anything like that,’ Comey said.

An audience member took the microphone to bring the conversation back to Trump, asking Comey to define the line between exerting executive power and obstructing justice.

He continued: ‘The question is: Did the president act in a way that manifested a corrupt intent, not the discharge of his constitutional duties, but a corrupt intent to interfere with an ongoing proceeding or to intimidate or tamper with a witness. That’s a factual question.

‘There is a whole lot of facts laid out in Bob Mueller’s report that raise serious questions about whether there is a chargeable case for obstruction and witness tampering against this president.’

Pressed to answer his own question about whether Trump displayed corrupt intent to interfere, Comey said: ‘It sure looks like he did in connection with a couple of episodes, the direction to Don McGahn to get the special counsel fired is to my mind a flaming example.’

He went on to express complete agreement with a group of roughly 800 former federal prosecutors who have signed a statement asserting that Mueller’s findings would have produced obstruction charges against President Trump if he weren’t president.

Asked directly about whether Trump should be charged when he is out of office based on the Muller report findings, Comey waffled and stated: I think the justice department will have to take a serious look at that. Whether it’s a wise thing to do to a former president, I don’t know. That’s a harder question, a much bigger question than the facts of the case.’

Cooper pressed: ‘But you think the evidence is there to prosecute?’

‘Sure looks like it’s there with respect to at least a couple of those episodes of obstruction,’ Comey replied.