Disaster waiting to happen? Japan’s iconic Mount Fuji could paralyse Tokyo with more than 4 inches of ash if it erupted, government study reveals

Japan’s iconic Mount Fuji could paralyse Tokyo with more than four inches of ash if it erupted, choking roads and halting water supplies.

The snow-capped peak of the country’s highest mountain 100 kilometers west of Tokyo is a symbol of Japan – and an active volcano.

It last erupted in 1707, when volcanic smoke is said to have reached as high as about 20,000 meters and volcanic ash accumulated at a depth of more than 3 meters in areas around the mountain. 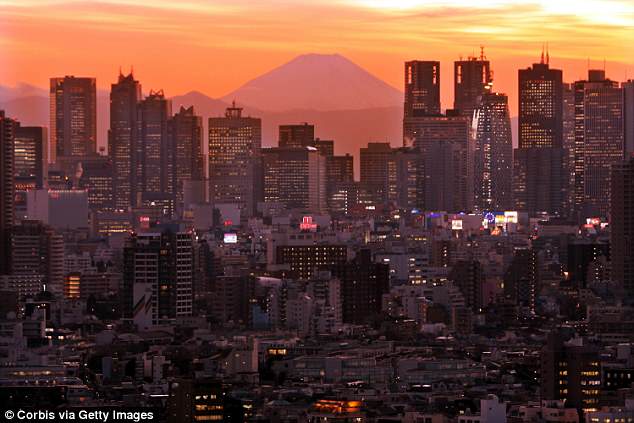 Japan’s highest peak of Mount Fuji is seen between the skyscrapers of Tokyo’s Shinjuku area. An eruption could leave the city under four cm of ash

Ash piled up to a depth of more than four inches (10cm) in the eastern Kanagawa Prefecture, in areas including Yokohama and Sagamihara, and reached 1.5 inches (4cm) in central Tokyo

But while it has not shown any signs of life in recent decades a potential eruption now could shower more than four inches (10cm) of ash on central Tokyo, according to a government study seen by the Kyodo news agency.

The ash would paralyse the capital, rendering roads impassable and stopping the flow of goods and people.

The study found just 0.5cm of ash could cause mechanical problems for cars and more than 1cm could cause mass power outages and the failure of water filtration systems.

Noriko Urata, an official in charge of disaster research, confirmed the government is assessing the possible impact of an eruption and preparing measures to deal with the scenario.

‘But we are not in a position to unveil details,’ he told AFP. 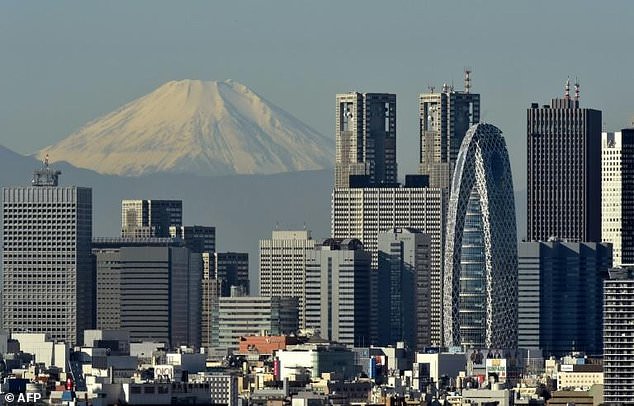 In the past, the government has estimated that an eruption could result in damage and losses worth over 2.5trillion yen ($23billion).

‘But if we include the impact on aviation and other transportation as well as secondary infrastructure, the cost could be far more than two trillion yen,’ said Toshiyasu Nagao, head of Tokai University’s Earthquake Prediction Research Centre.

‘Mount Fuji is categorized a young volcano,’ Nagao told AFP. ‘It would be no surprise if Mount Fuji erupts any time in the near future.’

Japan, with more than 110 active volcanoes, sits on the so-called Pacific ‘Ring of Fire’ where a large proportion of the world’s earthquakes and volcanic eruptions are recorded.

In January, a Japanese soldier was killed and several other people injured after an eruption near a popular ski resort in northwest of Tokyo.

An estimated 63 people were killed in the shock eruption which occurred as the peak was packed with hikers out to see the region’s spectacular autumn colors.