Jeff Bezos is no longer the world’s richest man – at least for the time being.

The Amazon founder was knocked off his perch by Bill Gates as a result of after-hours trading on Wall Street on Thursday.

After reporting less-than-expected third quarter earnings, Amazon’s stock nosedived by 7 per cent in after-the-bell trading, dragging down Bezos’ net worth to $103.9billion.

Gates, the Microsoft co-founder, is worth $105.7billion, according to Forbes. 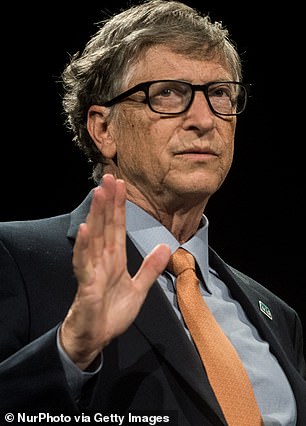 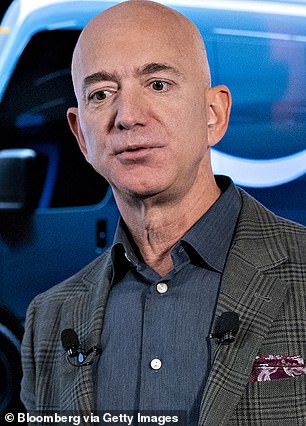 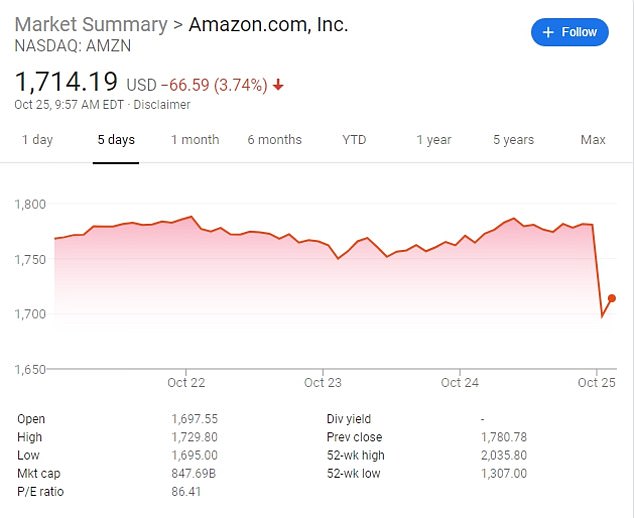 Amazon’s stock price dropped sharply in after-hours trading on Thursday, bringing Bezos’ net worth down with it

The software pioneer spent 24 years atop the list of world’s richest people, but he was overtaken by Bezos last year.

Bezos, who owns 57.6 million shares of Amazon, lost nearly $7billion in a single day as a result of the drop in company stock price which analysts say was caused by Amazon’s push for faster delivery.

The online retailer said its third-quarter net income fell 26 per cent from a year ago, missing Wall Street expectations.

Amazon is moving to cut its delivery time in half to one day instead of two.

To do that, it’s adding more workers in its warehouses and expanding its shipping network with more trucks, jets and package sorting facilities.

The effort is costing the company about $1.5billion, nearly double what it previously said it would cost.

But Amazon said the one-day shipping is attracting more customers and gets shoppers to spend more.

‘It’s a big investment,’ Bezos said in a statement.

‘And it’s the right long-term decision for customers.’

The Seattle-based company reported net income of $2.1billion in the three months ending on September 30, down from $2.9billion a year ago.

Earnings per share came to $4.23. That’s 36 cents less than what analysts expected, according to FactSet.

The company, which used to report razor-thin profits, has seen its quarterly profits grow in the past two years as it expanded into fast-growing businesses, such as cloud computing and advertising.

Sales at its cloud computing business, which powers video-streaming service Netflix and other companies, rose 35% from a year ago.

And revenue in its ‘other’ category, which the company said is mostly made up of its advertising business, jumped 44 per cent.

But as Amazon grows it faces increasing scrutiny from regulators.

The Justice Department opened an antitrust investigation of major tech companies and whether their platforms have hurt competition and stifled innovation. 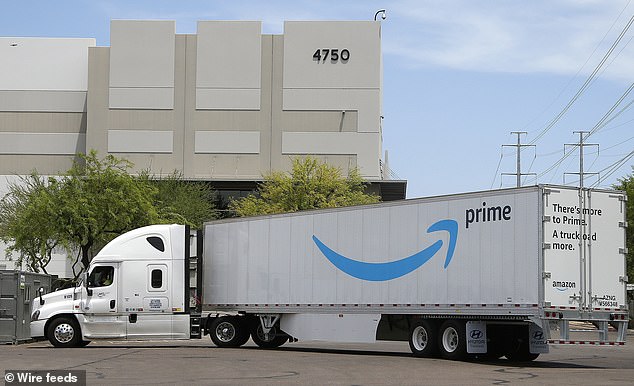 Bezos said on Thursday that Amazon’s drop in net income is due to its decision to expand its workforce and fleet of delivery trucks in order to cut delivery time for Prime customers from two days to one day. An Amazon truck is seen above at a fulfillment center in Phoenix

The department didn’t name any companies, but it said online retailers were an area of ‘widespread concern.’

And the European Union is investigating how Amazon uses data from the small businesses that sell goods on its site.

On Thursday during a call with reporters, Amazon executives declined to answer any questions about regulation.

‘I have nothing to report on that,’ said Chief Financial Officer Brian Olsavsky.

Revenue for the quarter beat expectations, rising 24 per cent to $70billion.

The third quarter included Amazon’s made-up sales holiday ‘Prime Day,’ which has become one of the company’s biggest shopping events of the year.

Besides adding workers in its warehouses to pack and ship boxes, the company said it’s been hiring more software engineers and salespeople for its cloud business.

For the current quarter, which includes the holiday shopping season, Amazon expects revenue between $80billion and $86.5billion.

That’s below the $87.4billion analysts expected.