‘When did Bill Shankly become English?’: Jeremy Corbyn is ribbed for tweeting ‘inspirational’ message from ‘one of our country’s finest managers’ before England’s first World Cup match (only to be told he’s SCOTTISH)

He had hoped to provide an ‘inspirational message from one of our country’s finest ever football managers’ ahead of England’s first World Cup match last night.

But Labour leader Jeremy Corbyn’s invoking of Bill Shankly’s famous remarks on socialism backfired when it was pointed out that he was actually Scottish.

Mr Corbyn was ribbed after quoting Shankly, who turned Liverpool into one of the best sides in the world in the 1960s – but also played 12 times for Scotland. 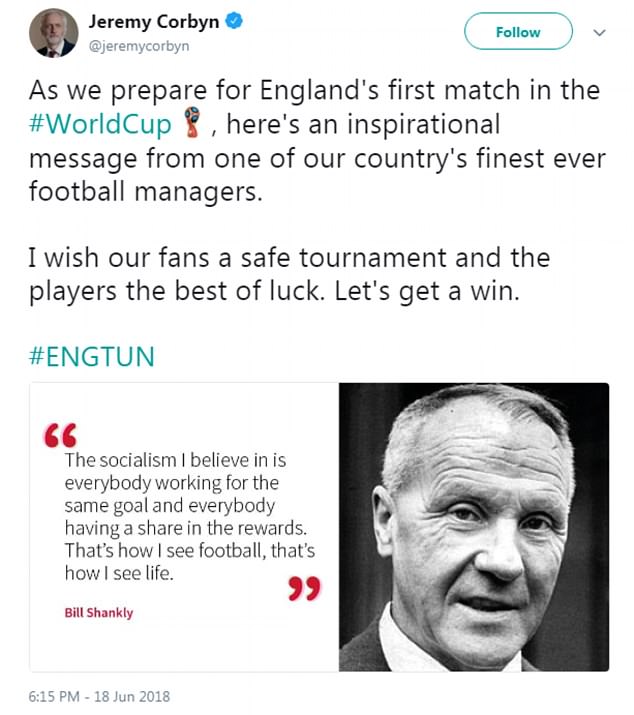 Mr Corbyn tweeted: ‘As we prepare for England’s first match in the World Cup, here’s an inspirational message from one of our country’s finest ever football managers.

‘I wish our fans a safe tournament and the players the best of luck. Let’s get a win.’

How Scot Shankly was ‘unbelievably proud’ to play against England

Born in Ayrshire in 1913, Bill Shankly was one of ten children and began his footballing career in the Scottish junior league.

He turned professional with Carlisle United in 1932 and moved to Preston North End the next year for £500.

Shankly played for Scotland in five full and seven wartime internationals, but it was as manager of Liverpool that he had the most success.

He turned the Reds into one of the world’s most formidable sides, and over 15 years won the League Championship three times, the FA Cup twice and the UEFA Cup once.

But when Shankly left, supporters were said to have jammed the club’s switchboard hoping it was a hoax.

Shankly spoke of his ‘unbelievable pride’ at playing against England for Scotland, telling how his country’s players would summon the spirit of William Wallace or Robert the Bruce when pulling on the blue shirt.

He then quoted Shankly, who said: ‘The socialism I believe in is everybody working for the same goal and everybody having a share in the rewards. That’s how I see football, that’s how I see life.’

But various people tweeted him to point out that Shankly was actually Scottish, with one saying: ‘When did Bill Shankly become English?’

Another said: ‘You do know he’s a Scotsman who would probably want England to lose?’

But others pointed out that the quote was fair, given that Shankly is one of the most successful managers in England, despite him being Scottish.

Mr Corbyn has previously used the same quote, most notably in his closing speech at the Labour party conference in Liverpool in September 2016.

However he added at the time: ‘We’re not all Bill Shanklys – each of us comes to our socialism from our own experiences’.

Mr Corbyn, an Arsenal fan, also referenced the quote before the FA Cup final between the North London club and Chelsea in May 2017.

It is the first time England have opened a major tournament with a win since 2006.

England’s next two Group G matches in Russia are against Panama on Sunday, followed by Belgium next Thursday.