Florida job opening for a ‘python hunter’ that pays just $15 an hour gets more than 2,600 applicants worldwide – including an Iranian man who caught the snakes as a teen so he could play with them

A job advertisement for a python hunter in Florida has attracted the attention of an Iranian man who used to catch snakes and play with them as a child.

Mohammad Asghari is one of 2,600 people who have applied to become a python removal agent with the South Florida Water Management District.

The ‘python elimination program’ is an effort by officials to respond to the state’s ever-growing Burmese python population.

Asghari spent his childhood catching snakes in the mountains where he grew up in Tehran and stored the venomous snakes in a plastic box to play with them, he told the Miami Herald. 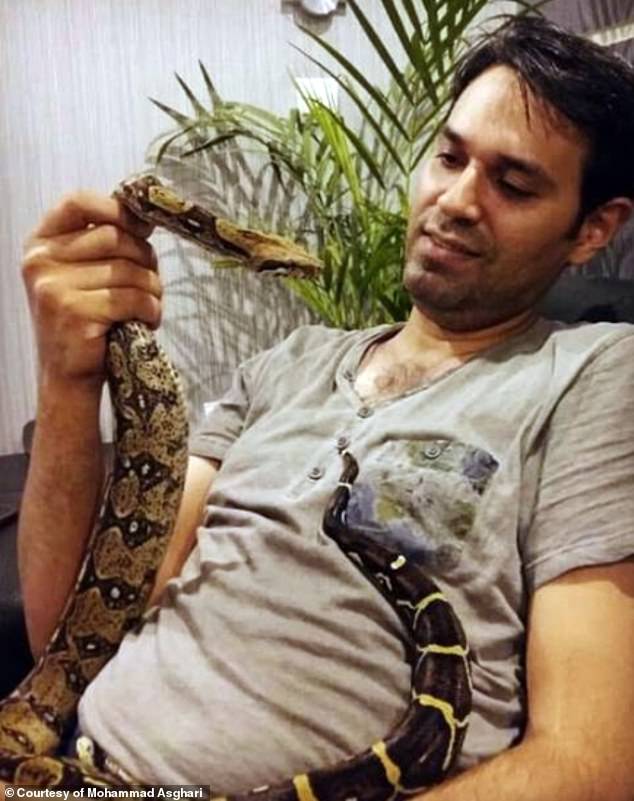 A job advertisement for a python hunter in Florida has attracted the attention of an Iranian man Mohammad Asghari, (pictured),  who used to catch snakes and play with them as a child 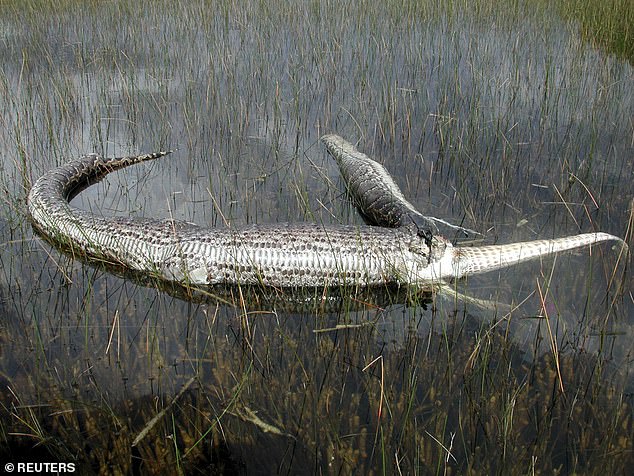 The python elimination program is an effort by officials to respond to the state’s booming Burmese python infestation. A handout photo released by Everglades National Park shows a dead Burmese python which had swallowed an American alligator several years ago

Asghari is an electrical engineer in Iran and describes snakes as ‘the most beautiful animal.’

He is the owner of over 70 snakes, including Boa constrictors and Burmese pythons, with the Miami Herald reporting that many were purchased by him illegally through the black market.

Asghari claimed he would be an ‘excellent’ python removal agent because he is very familiar with the animals. ‘They can’t hurt me at all. I fully understand their behavior.’

Despite the inherent risks and dangers involved, the job pays just $15 an hour and comes with a one-year contract with no healthcare benefits, according to the Miami Herald.

The python removal program has a budget of $1 million and officials are planning to the double the number of pyhton hunters they have to 50.

However benefits include an access key to ‘exclusive gated areas’ in nature areas, an app to log their work on their phone, and a badge. They also have access to hunting on state lands south of Lake Okeechobee.

Feeney claimed applications for the role have come in thick and fast since August.

‘There are a lot of qualified individuals out there. I look for people who have regional experience, who know the Everglades, who care about the Everglades.’

Applicants had to be over the age of 18, sign a waiver of liability and never have been convicted of a felony.

Mohammad Asghari said he would love the job as he grew up watching documentaries about Florida wildlife. He claimed he would love to protect the environment from an invasive species.

Asghari said he relocate his wife and two daughters from Iran to the US if he got the job and is waiting to hear back about his application. He claimed: ‘My dream is to grow snakes and work with snakes.’ 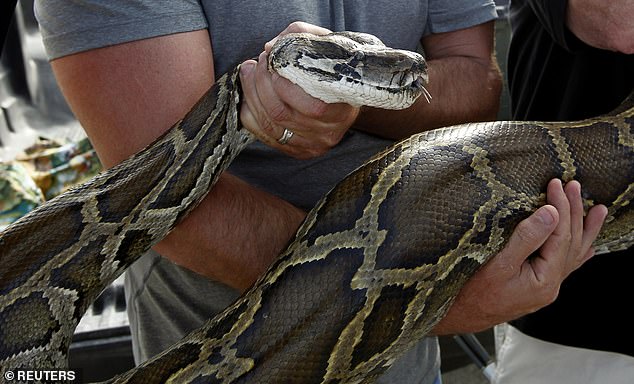 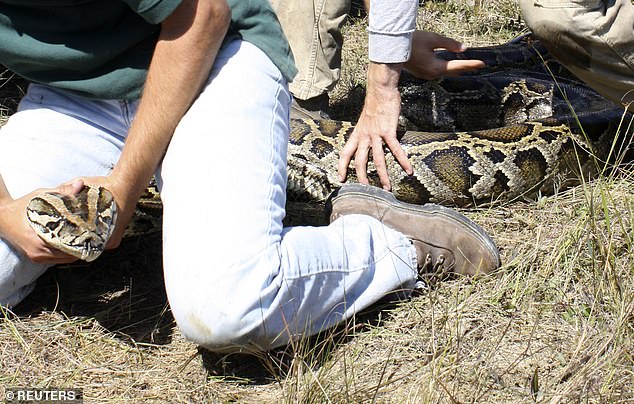 The python elimination program began in March 2017 and requires ‘public-spirited individuals to humanely euthanize these destructive snakes’, which have become an apex predator

Feeney claimed the python elimination program has removed more than 2,600 pythons since it began in March 017 and he claimed the number is ‘a drop in the barrel.’

Many pythons were pregnant and could give birth to 100 eggs at any one time.

‘Those pythons, had they lived to maturity, would have eaten hundreds of animals. We have given hundreds of thousands of native animals a fighting chance. We are just getting started.’

Other people who have applied include  a man from Saipan  who wanted to learn how to catch a pyhton.

In his application he wrote, according to the Miami Herald, : ‘I am willing to do the job, I could email my résumé if needed.’

Haider Hussain, a retired banker, 69,  from Alberta, Canada, told The Miami Herald that he had found a  ‘cost effective trapping method.

He said it would lure pythons in as they searched for food but declined to elaborate further ‘because the Chinese are listening’.’

‘Twenty guys running around 10,000 square kilometers, how the hell are they going to catch anything?’ said Hussain, 69, a former banker. ‘[The python] should be trapped rather than pursued.’

The python elimination program began in March 2017 and requires ‘public-spirited individuals to humanely euthanize these destructive snakes’, which have become an apex predator in the Everglades, according to officials.

On its website, the program states that giant constrictors pose direct threats to humans and native wildlife.

Pythons cause significant impacts to native prey, such as marsh rabbits, deer, wading birds and even alligators.

‘Their aggressive predation on native prey robs native predators, such as panthers, raptors, alligators and bobcats, of their primary food sources,’ it adds.