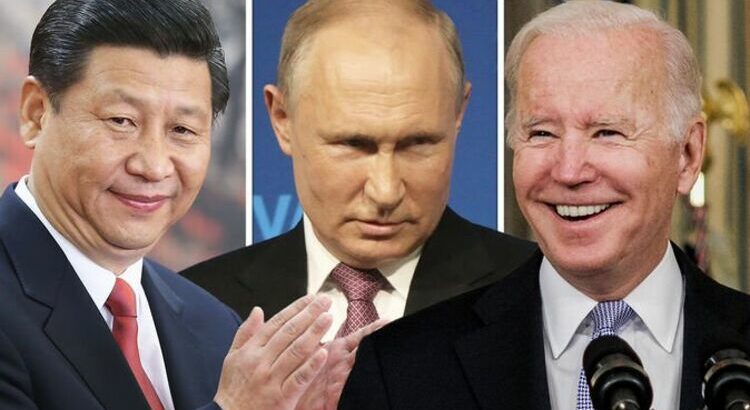 Russia’s invasion of Ukraine more than five weeks ago has brought its relationship with China into sharp focus. Three weeks before Putin’s invasion on February 24, the Russian President touted his nation and China’s seemingly unshakeable bond. He and his Chinese counterpart President Xi spoke of their “no limits” relationship and jointly declared that there were no “forbidden” areas of cooperation between them.

However, China is under increasing pressure from western leaders amid fears that it could provide Russia with crucial military support for its war in Ukraine or help alleviate international economic sanctions, which have battered the Russian economy.

Beijing maintains it is impartial in the conflict, and on Friday, Premier Li Keqiang told EU leaders that Beijing will try to bring about peace in “its own way”.

As Moscow and Kyiv held peace talks in Turkey this week, Xi and US President Joe Biden are also “finding a way to talk”, according to political expert Peter Frankopan.

The professor of global history at the University of Oxford claimed the leaders are communicating openly as Putin risks the “world going up in flames”.

Discussing their relationship with Express.co.uk, he said: “I think there is a bit of discussion.

“Communication lines are being kept quite open between Washington and Beijing.

“Because no one wants to see the world go up in flames.

“Those are the risks that we are dealing with.”

Biden and Xi discussed the situation in Ukraine during a two-hour telephone call two weeks ago.

The White House claimed Biden had “described the implications and consequences if China provides material support to Russia”.

In a statement it said the leaders of the two superpowers have agreed to keep “open lines of communication”.

It added: “The President underscored his support for a diplomatic resolution to the crisis.”

The Chinese President was quoted as saying: “Peace and security are the most cherished treasures of the international community.”

Xi is aware of the further sanctions that could be imposed on China if it assists Russia by providing ammunition and other support, or if it helps the Kremlin evade sanctions.

Prof Frankopan claimed that Xi will also be thinking about Russia’s threats to raise the stakes by not ruling out the use of nuclear weapons in the conflict.

He said: “We have got a government in Moscow saying very carefully, very regularly, that they are not excluding using nuclear weapons in this confrontation with Ukraine.

“That should, for all states around the world, should make us all sit up.

“How do we work out our differences rather than use force? That is a real concern.

“So, I think that the Chinese and the Americans have tried to find a way to talk to each other.

“It has a few bits of success in there at the moment, but clearly, it is part of a much bigger picture.”