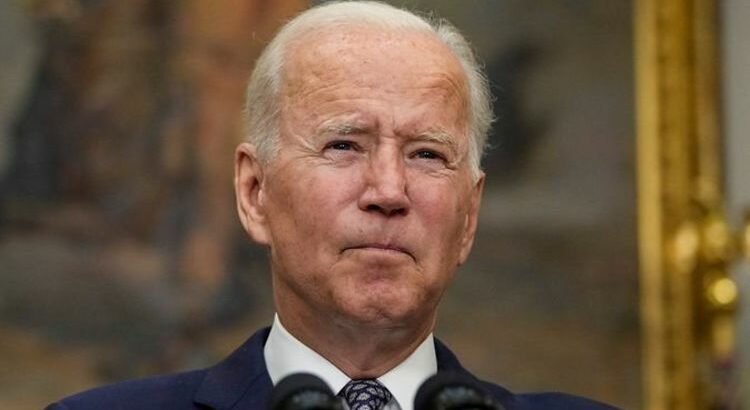 Joe Biden warns of 'growing risk' of an attack from ISIS

The US President announced all American troops would be withdrawn by the 20th anniversary of 9/11, allowing the Taliban to overrun Afghanistan. British and American forces are desperately trying to evacuate westerners, and their Afghan allies, from Kabul airport.

On Tuesday Mr Biden confirmed all US soldiers will leave Kabul airport by August 31.

The Taliban has said it will refuse to guarantee their safety after this point.

However, a number of European nations, including Britain, France and Germany, had been lobbying the president for an extension.

They argued more time is needed to evacuate western nationals, and their Afghan allies.

Mr Biden ignored this pressure, telling a G7 meeting on Tuesday the withdrawal would go ahead as originally planned.

They said: “Having worked with a lot of these guys, they believe their own rhetoric and don’t feel that compels them to actually take firm steps.

“A lot of them were convinced by simply showing up in Cornwall [for the G7] and saying the right things to leaders in the UK that would be sufficient – that they would think at least he [Mr Biden] isn’t throwing tweets at us.

“There’s a disconnect between what he is telling leaders, and the public, and what’s happening.”

Boris Johnson is urging the Taliban to allow “safe passage” for western nationals, and Afghan refugees, who want to leave the country beyond the August 31 deadline.

On Tuesday Taliban spokesman Zabihullah Mujahid said the group will not extend the deadline, and “are not in favour of allowing Afghans to leave” the country.

He said there was “no consultation with allies” ahead of the US withdrawal announcement.

He wrote: “The President had already made his decision beforehand not to extend the evacuation deadline.

“He told Boris Johnson that in no uncertain terms on the phone the previous evening.

“So, what was the point of having a meeting at all?

“It was Mr Biden, as he is wont to do, paying lip service to US allies.”

After the G7 meeting Mr Johnson warned the Taliban will face consequences, if they block the exit of westerners and their Afghan allies after August 31.

He commented: “The number one condition we’re setting as G7 is that they’ve got to guarantee right the way through, through August 31 and beyond, safe passage for those who want to come out.

“Some of them will say that they don’t accept that, some of them I hope will see the sense of that, because the G7 has very considerable leverage, economic, diplomatic and political.”

At least 70,700 people have been evacuated from Kabul airport since the operation began.

Kabul fell to the Taliban on August 15, with Afghan president Ashraf Ghani fleeing the country.