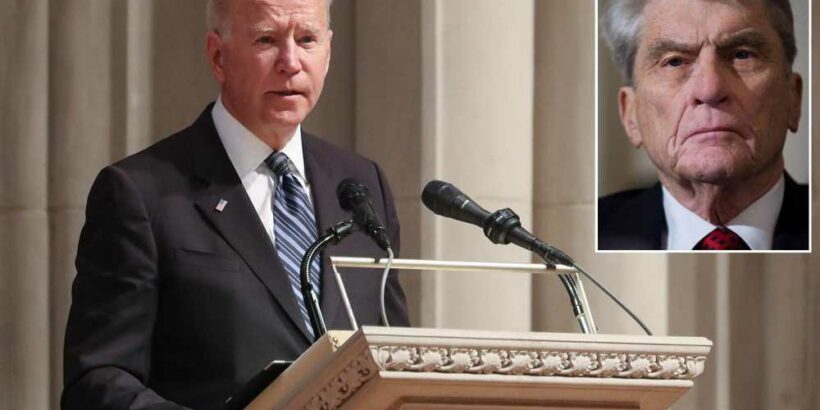 President Biden on Wednesday spoke at the funeral of former Republican Sen. John Warner of Virginia, saying he showed that bipartisanship is possible “in the battle for the soul of America.”

Biden said Warner’s decision to endorse him last year “gave me confidence, not about winning but about being able to do the job.”

“In the battle for the soul of America today, John Warner is a reminder of what we can do when we come together as one nation,” Biden said.

Warner, the sixth husband of actress Elizabeth Taylor, was a World War II and Korean War veteran and was known for his influence on military affairs.

Warner was secretary of the Navy under President Richard Nixon and chairman of the Senate Armed Services Committee during the early years of the US interventions in Iraq and Afghanistan.

“He understood that democracy is more than a form of government. Democracy is a way of being,” Biden said at Warner’s funeral at the Washington National Cathedral.

“He understood it begins and grows in an open heart and with a willingness to work across the aisle and come together in common cause. And that empathy is the fuel of democracy, the willingness to see each other as opponents, not as enemies.”

Biden and Warner worked as Senate colleagues for 30 years. Biden joined the Senate in 1973, followed by Warner in 1979. Both left the Senate in 2009.

Biden spoke amid an intra-Democratic Party tug of war over whether to pursue bipartisanship on Capitol Hill or jettison Republicans in favor of more far-reaching bills.

Negotiations continue on a potential bipartisan compromise on an infrastructure bill after Biden unfurled a $2.3 trillion opening pitch.

Some Democrats want to call off infrastructure talks and use budget reconciliation to ram through a large package of tax hikes and social spending without any Republican support.

Although he campaigned on unity, Biden’s first major legislative achievement was a $1.9 trillion COVID-19 stimulus bill that he told Democrats to pass without Republican support just four days after 10 GOP senators met with him to start negotiations.