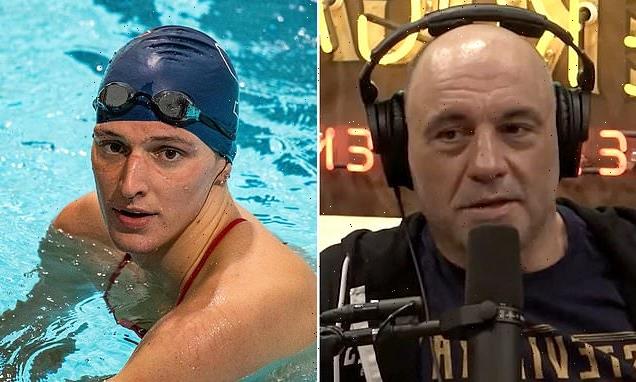 Joe Rogan has waded into the Lia Thomas row by accusing the trans swimmer of ‘an assault on woman’s sports’ while speculating that her wins may finally lead to the implosion of woke authoritarianism.

During an episode of The Joe Rogan Experience last Thursday, Rogan and fellow comedian Yannis Pappas discussed the controversial University of Pennsylvania athlete, who has broken several women’s swimming records after transitioning from a male to a female.

‘What it is now is an assault on women’s sports,’ Rogan said.

Thomas broke the pool record in the 500-yard freestyle back in February, and swam the fastest women’s time in the nation for the 200 meter free swim in December. 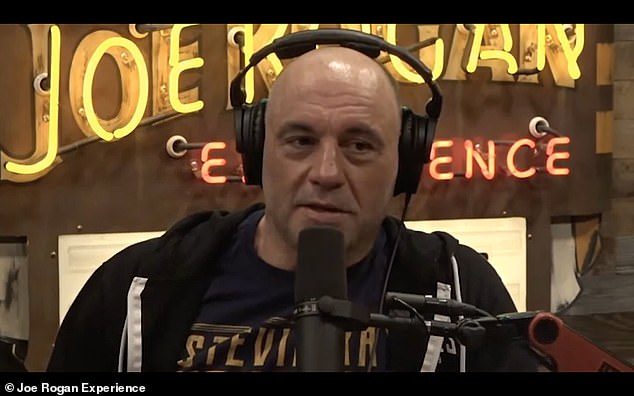 Pictured: Rogan during an episode of The Joe Rogan Experience last Thursday, where he discussed the controversial collegiate athlete Lia Thomas 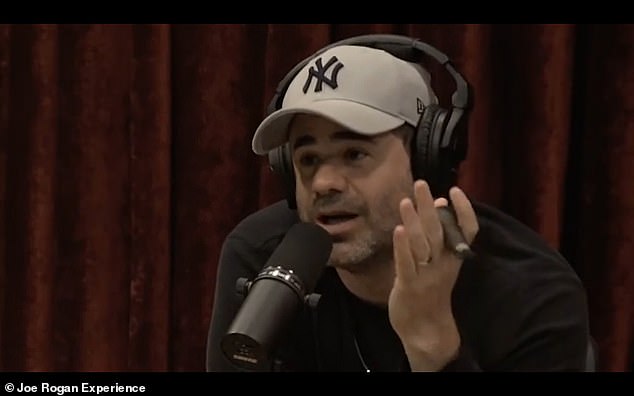 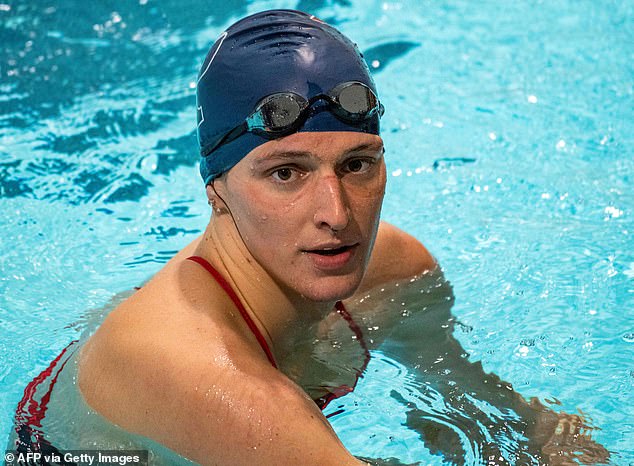 Lia Thomas, a transgender woman, finishes the 200 yard Freestyle for the University of Pennsylvania at an Ivy League swim meet against Harvard University in Massachusetts

Rogan went on to call Thomas’ dominance in the sport ‘not fair’ and added that the outrage people, women especially, are expressing could be ‘the woke straw that break’s the camel’s back.’

‘That might be the woke straw that breaks society’s camel’s back. People are – Women are so frustrated because if you – or parents if your daughter is competing and they’re competing against trans women it’s not fair,’ Rogan continued.

‘It’s not fair no matter what anybody says. There’s this nonsense idea of like “well there’s outliers.” There’s outliers and then there’s biological males.’

‘There’s a reason why we have a distinction between men and women’s sports.’

Thomas has completed the required hormonal treatment to be eligible to compete against women’s sports, but critics say she still has huge unfair advantages as a result of going through male puberty and living as a man until relatively recently.

Sporting bodies are now discussing how to address the issue, and could impose harsher regulations on trans athletes to try and improve fairness. Suggestions include adding an asterisk next to the names of trans female athletes who win races, or even having trans-only races.

Rogan had similarly opined on a transgender MMA fighter, Fallon Fox, back in 2012.

Fox, who was born a biological male before transitioning to a female later in life, having made her male-to-female transition in 2006 during a trip to Thailand.

‘She calls herself a woman but… I tend to disagree. And, uh, she, um… she used to be a man but now she has had, she’s a transgender which is (the) official term that means you’ve gone through it, right? And she wants to be able to fight women in MMA. I say no f****** way,’ Rogan said of Fox at the time.

‘I say if you had a d*** at one point in time, you also have all the bone structure that comes with having a d***.’ 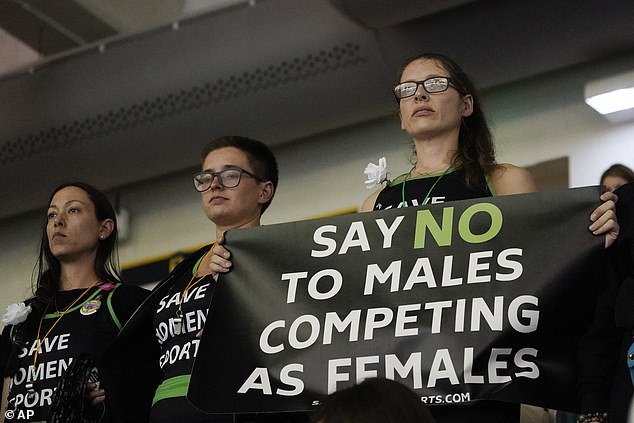 Protesters, one holding a sign, stand as Pennsylvania transgender athlete Lia Thomas competes in the women’s 200 freestyle final at the NCAA swimming and diving championships on March 18, 2022 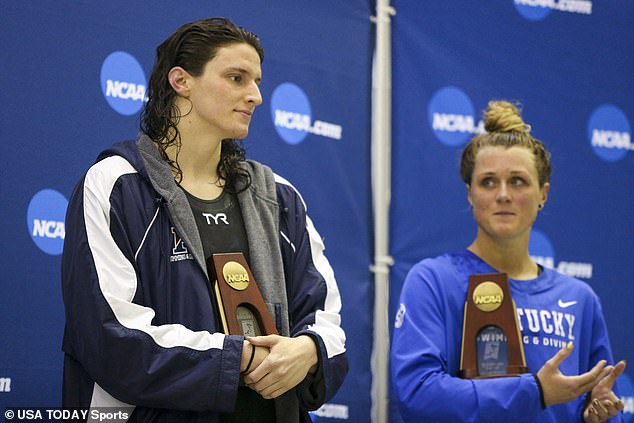 Meanwhile, the Kentucky swimmer who tied with Thomas for fifth place in an NCAA championship hit out at officials for telling her she would be mailed another trophy after it was given to Thomas, says that ‘most females are not okay with the trajectory of women’s sports.’

‘The majority of us female athletes, or females in general, really, are not okay with this, and they’re not okay with the trajectory of this and how this is going and how it could end up in a couple of years,’ Riley Gaines told Tennessee Senator Marsha Blackburn on her podcast ‘Unmuted with Marsha.’

Gaines, a University of Kentucky swimmer who has been competing since she was ten, tied with Thomas for fifth place in the 200-yard freestyle NCAA championships last week. 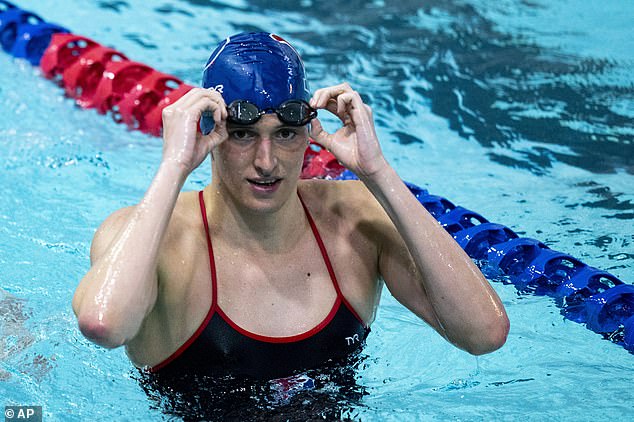 Pennsylvania’s Lia Thomas looks on in the warm-up pool during the Dartmouth Yale Penn meet, Saturday, January 8, 2022, in Philadelphia 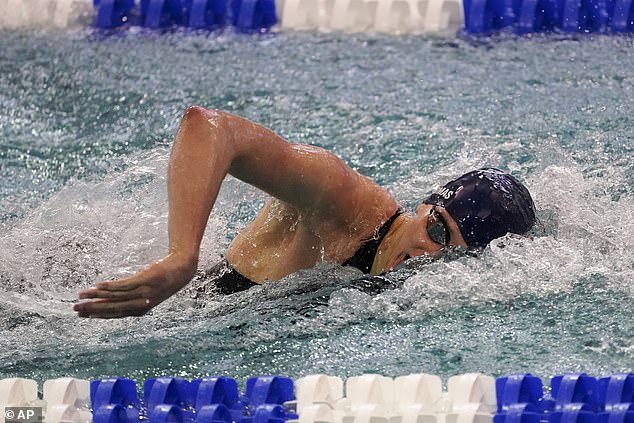 Pennsylvania’s Lia Thomas competes in the 200 freestyle finals at the NCAA Swimming and Diving Championships on March 18, 2022, at Georgia Tech in Atlanta

While Thomas was competing within the rules, as she has completed a year of testosterone suppressants per NCAA guidelines, Gaines said she felt the collective frustration of the ‘only one percent of female athletes’ who make it to NCAA competitions.

The University of Kentucky recounted the moment she realized that even though Thomas and she had tied, the trophy would be given to Thomas, with officials offering to mail Gaines’.

‘I touched the wall and saw there was a five by my name indicating that I got fifth… I also looked up, and I saw the number five by Lia’s name and so, in that moment, I realized we tied,’ Gaines said.

‘It was kind of like a flood of emotions. I was extremely happy for the girls above me who conquered what was seemingly impossible by beating Lia… I was shocked, really,’ she added.