Joey Chestnut expressed regret for briefly putting a protester in a chokehold Monday during the annual Nathan’s Hot Dog Eating Contest – and he also explained his actions during a phone interview with USA TODAY Sports.

Chestnut, standing at the center of the raised stage July 4 on Coney Island in New York, quickly resumed shoving hot dogs into his mouth after the incident. Video of the moment went viral after Chestnut won his 15th title in 16 years.

“As soon as a I grabbed the guy, I realized he was a kid,’’ Chestnut told USA TODAY Sports on Tuesday. “I felt bad afterwards. I was just amped up, just focused on getting back to eating.

“It’s just unfortunate. I wish that it didn’t happen. It’s a bummer.”

The protester was Scott Gilbertson, 21, of Berkley, California, who was charged with criminal trespass, disorderly conduct and harassment, according to the New York Police Department (NYPD). He was one of three protesters, all animal rights activists working with a grassroots group called Direct Action Everywhere.

“I felt like it was unnecessary for sure,’’ Gilbertson told USA TODAY Sports of Chestnut’s reaction. “I had the mask on so I couldn’t see who it was. I assumed it was a security guard. And then when I saw the video, it was Joey. I was surprised.’’

“I was freaked out a little bit because he had the mask on,’’ Chestnut said. “I saw the mask and I think that’s when I realized he doesn’t belong here.’’ 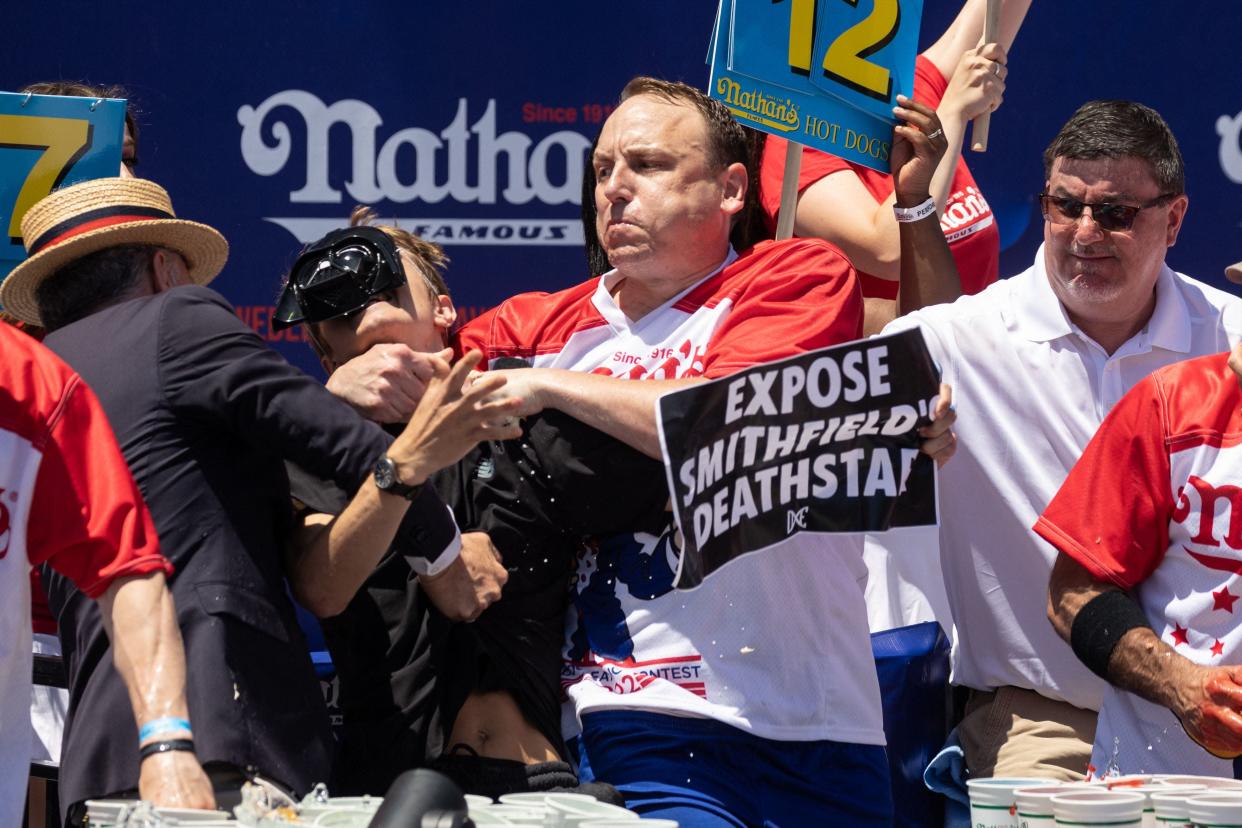 “I think it was pretty plain to see,’’ Johnson said. “I’ll cut him a little slack. You’re in the heat of the moment, this is really intense, he’s trained a lot for it, it means a lot to him. He’s not public enemy No. 1 or anything, but a pretty excessive response to a peaceful protest.’’

After watching the video, Chestnut likened his reaction to a dog exhibiting food aggression – in this case, a protester threatening to get between Chestnut and his hot dogs.

“It looks excessive,’’ he added.. “But in my position, I don’t know, I had been waiting a long time for the contest and I wish (Gilbertson) had just stood by me and I never would have touched him. If he hadn’t elbowed me and got in front of me, it would have not been a problem. But I also wish they didn’t get on stage.’’

Gilbertson said his neck is sore as a result of the chokehold but he doesn’t think it’s anything serious.

“I was trying to get in front of him. I couldn’t see how close I was to him and I kind of nudged him. So I can understand, I guess, why he may have overreacted. But I think the extent to which he reacted was unnecessary.’’

The whole encounter lasted no more than five seconds, with emcee George Shea pulling the protester away from Chestnut as the competitive eating champ resumed devouring hot dogs and buns during the 10-minute contest.

The two other protesters – Robert Yamada, 42 of Phoenix and Joshua Marxen, 31, of Santa Clara, California – where charged with criminal trespass and disorderly conduct during the incident, according to the NYPD.

Chestnut said people’s reaction to how he handled the protester has been mixed. He said his fiancée received a direct message on Instagram saying the incident was a red flag for abusive behavior and she shouldn’t be with Chestnut.

“For the most part,” Chestnut said, “my family, they’re happy that I didn’t let it bother me and I was able to keep going.”

Chestnut said he thinks the incident with the protester may have cost him three hot dogs. He ate 63, 20 ahead of runner-up Geoffrey Esper.

Shea, longtime emcee of the contest, said he thought the protesters’ efforts failed.

“The end result of that effort on their part was to make Joey into an epic hero if he already wasn’t one, which he was,’’ Shea said. “To elevate him further in the world of epic heroes, that was the end result.’’