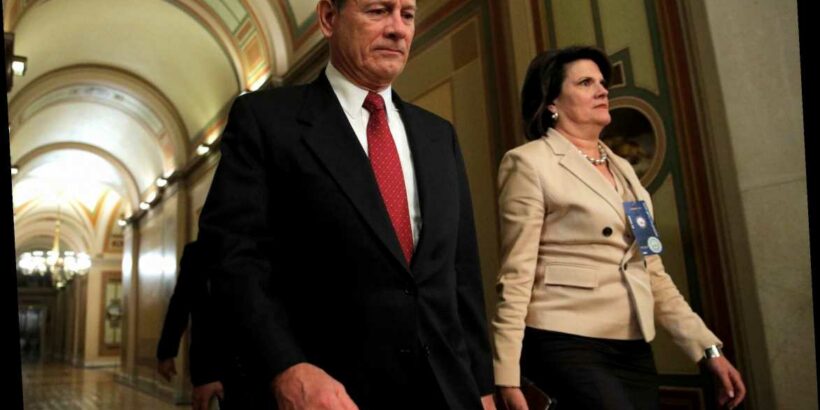 Trump to meet with Rep. Kevin McCarthy in Florida

Senator tapped to preside over Trump impeachment is ‘Batman’ star

The Supreme Court has been declining to comment when reached by The Post, as well as other outlets, on why its top jurist will not take part in the historic trial.

Speaking to MSNBC’s “The Rachel Maddow Show” on Monday evening, Senate Majority Leader Chuck Schumer (D-NY) revealed that Roberts “did not want” to take part in the trial.

“The Constitution says the chief justice presides for a sitting president,” the top-ranking senator said. “So it was up to John Roberts whether he wanted to preside with a president who is no longer sitting, Trump, and he doesn’t want to do it.”

Roberts has not offered any comment on his role in a second impeachment trial since the House of Representatives voted in favor of taking the matter to trial in the Senate earlier this month.

That silence has been noted by those opposed to impeaching a former president.

Sen. Rand Paul (R-Ky.), who has been vocal in his opposition to the second impeachment, used Roberts’ planned absence from the trial as a point in favor of dropping the trial.

“The Constitution says two things about impeachment — it is a tool to remove the officeholder, and it must be presided over by the Chief Justice of the Supreme Court,” the Kentucky senator wrote in an op-ed Sunday for The Hill.

“Neither one of those things will happen. President Trump is gone, and Justice John Roberts, properly noticing the absence of an officeholder being impeached, is declining to preside,” he continued. “That settles it for me.”

Speaking earlier this week on the matter, Paul referenced Roberts again, saying, “If the chief justice doesn’t preside, I think it’s an illegitimate hearing and really goes to show that it’s not really constitutional to impeach someone who’s not president.”

Roberts’ role in the trial will be filled by Senate president pro tempore Patrick Leahy (D-Vt.), who voted to convict Trump during his first impeachment trial.

Leahy, the longest-serving Democrat in the Senate, pledged, however, to take his trial oath “extraordinarily seriously.”

“When I preside over the impeachment trial of former President Donald Trump, I will not waver from my constitutional and sworn obligations to administer the trial with fairness, in accordance with the Constitution and the laws,” he said in a statement when he revealed that he would sit in for Roberts.

Paul was not the only GOP senator to speak up over Roberts’ absence — or comment on Leahy serving as his replacement.

Sen. John Cornyn (R-Texas), a member of GOP leadership, remarked Monday, “The Constitution requires that the chief justice preside over the impeachment trial of a president, but that’s not what we’re doing. To me, that’s indicative of the fact that we’re in uncharted waters.

“I just think it looks very petty and vindictive,” he added. “I understand there are a lot of people who are mad, but the process itself already looks like a railroad job.”

Sen. Josh Hawley (R-Mo.) echoed Cornyn’s concerns, saying, “There’s only one constitutional process for impeachment and it is of the president, not a president. It requires the chief justice to preside.”

Even Sen. Elizabeth Warren (D-Mass.) voiced objection to Roberts sitting out the trial last week amid concerns that he would do so.

“That is his constitutional duty. I can’t imagine why a Supreme Court justice would not do his duty,” the liberal pol said.

Sen. Richard Blumenthal (D-Conn.), who serves on the Senate Judiciary Committee, which plays a critical role in the impeachment process, also hoped Roberts would attend.

“I think he should because it will be a straightforward, simple trial. I would think that the chief justice lends the dignity and seriousness it requires,” he said, noting that he was “not required by law to do it.”