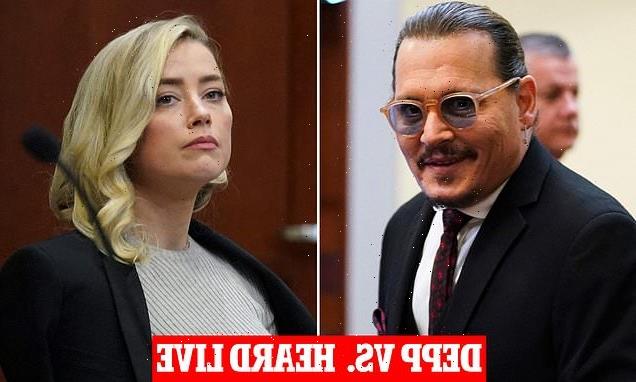 Follow DailyMail.com’s liveblog for the latest developments in day 18 of Johnny Depp’s libel lawsuit against his ex-wife Amber Heard…

Johnny Depp has arrived in court to the applause of cheering fans waiting outside for him in Fairfax, Virginia.

He was wearing a grew suit, with a black shirt, tie and pocket square.

The Pirates of the Caribbean star joked that the crowd was cheering because he ‘just made them all breakfast. Waffles.’

Heard entered the courtroom unceremoniously, wearing a black top with her hair tied back.

The livestream is set to begin at 9 a.m. EST.

Johnny Depp and Amber Heard will return to the courtroom at 9 a.m. EST for Day 19 of their heated defamation trial in Fairfax, Virginia.

Today will see more live witnesses take the stand after a series of video depositions were played on Wednesday with testimony from members of the Depp and Heard’s inner-circle, as well as Heard’s former acting coach and makeup artist.

The sole live witness was Whitney Henriquez, Heard’s sister, who echoed testimony that the Aquaman actor allegedly suffered physical abuse at the hands of Depp.

Henriquez, however, also admitted that she joked that Depp should hit her sister and tried to keep the couple together long after the relationship soured and she believed Depp was beating her sister.