Indonesian President Joko Widodo's plan to fast-track the distribution of a COVID-19 vaccine from next month has been stymied by his government's own Food and Drug Monitoring Agency (BPOM). 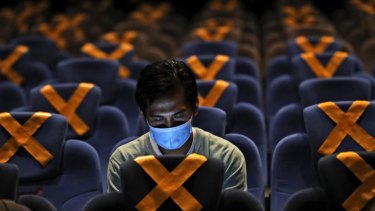 A man checks his mobile phone as he sits amid physical distancing markers prior to the start of a movie at the recently reopened CGV Cinemas theatre in Jakarta, Indonesia, last month. Credit:AP

The agency's decision is a serious blow to the President, who is desperately trying to slow the raging spread of coronavirus across the nation, and follows criticism from epidemiologists and some political allies that he was betting the farm on a vaccine strategy.

Agency boss Penny Kusumastuti Lukito said the candidate vaccine, CoronaVac, which is in third-stage trials in Indonesia and Brazil, would not be authorised for emergency use in December.

It won't be rolled out for emergency use until late January at the earliest, after discussions with Chinese manufacturer Sinovac Biotech and with researchers in Brazil.

There are still concerns about a lack of data on the effectiveness of the vaccine.

"We wanted to use [Brazil's data] because we are still unable to get the data from the clinical testing in Bandung. Brazil is unable to provide the data because it needs to analyse it first. So we will only get the data around the first or second week of January and we need time to analyse it," Penny said.

"So it is expected that we can only issue the emergency use authorisation by the third or the fourth week of January, if all data is complete."

As recently as Wednesday, Joko said he hoped the vaccine would arrive at the end of November. "We're working on it. If it does not happen, it will arrive in December both in the form of the finished product and raw material that will later be processed at PT Bio Farma".

PT Bio Farma is the state-owned pharmaceutical manufacturer and has partnered with Sinovac for the CoronaVac trial on 1600 volunteers in Bandung city and for subsequent production and distribution. 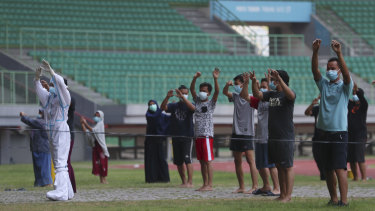 A health worker wearing protective suit performs exercise with patients at the Patriot Candrabhaga stadium outside Jakarta. The stadium was turned into an isolation centre for people showing symptoms of COVID-19.Credit:AP

But Dicky Budiman, an Indonesian doctor and epidemiologist studying for a PhD at Queensland's Griffith University, who has previously warned about the problems with his home country's reliance on a vaccine to stop the virus, said the decision was a good one.

"Let the vaccine research be led by science, not by politics or economics. I appreciate their decision to not give the emergency use authorisation and wait until the first quarter of next year because based on scientific methods, usually it will take two or three months after a vaccine trial [for the candidate vaccine to be ready]," he said.

Indonesia recently passed 5000 new COVID-19 cases in a single day for the first time. On Thursday it reported 4798 new cases and 97 more deaths.

This takes the country's total to 483,518 cases and 15,600 deaths – easily the highest in south-east Asia, but far fewer than in other nations with large populations such as the United States and Brazil.

However, persistently low testing numbers have led many experts to suggest far more Indonesians may have become infected with coronavirus than have been officially diagnosed.