Jakarta: It was billed as the great debate on law, corruption, terrorism and human rights.

The first presidential debate of the Indonesian political season was a chance for Indonesian President Joko Widodo and his challenger, Prabowo Subianto, to square up in prime time ahead of the April 17 poll, with their respective vice-presidential running mates by their side. 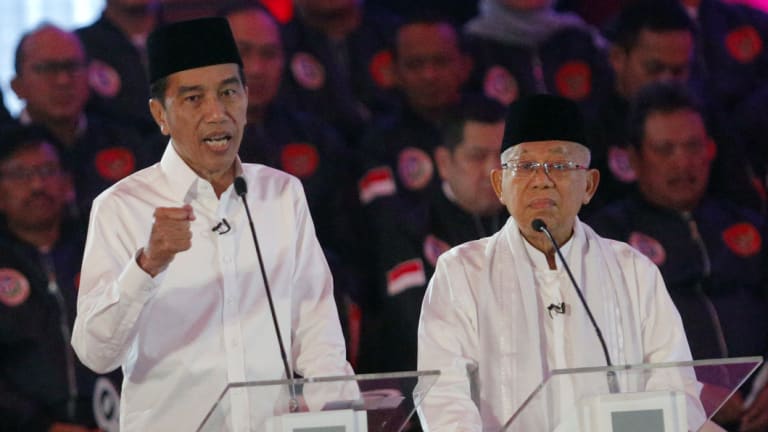 Indonesian President Joko Widodo and his running mate Ma’ruf Amin during the televised debate in Jakarta on Thursday night.Credit:AP

The President and the challenger. A re-run of the hard-fought 2014 election, when the two men faced each other for the first time and Widodo came out on top.

But while in 2019 the candidates are the same, this poll is no re-run of the previous election.

Widodo – a relative political clean skin five years ago who cut his teeth as governor of Jakarta and mayor of the mid-sized city of Solo – now has both the benefit and the burden of five years' incumbency. 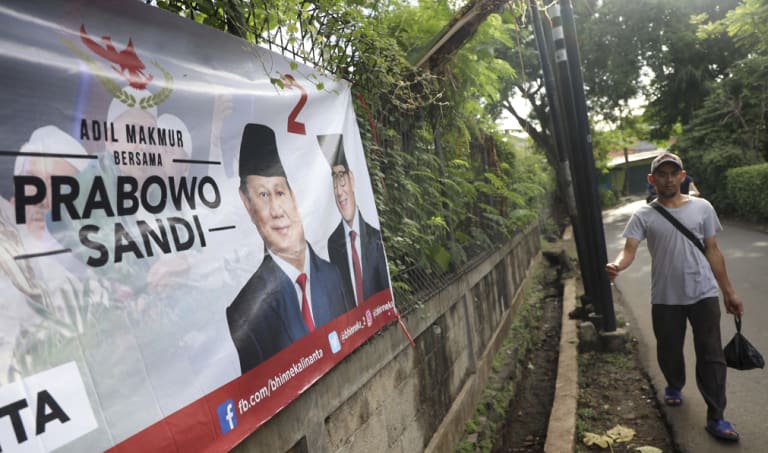 A banner in Jakarta for Indonesian presidential candidate Prabowo Subianto.Credit:AP

He has made progress as president, investing heavily in infrastructure, health and education, but in a country where corruption is near-endemic and poverty – despite a growing middle class – is still rife, it has not been progress enough.

Prabowo, the failed candidate from 2014 who also lost out when vice-presidential candidate in 2009, this poll is probably his last chance to win the presidency.

Both men have it all to play for.

Not that you would know it on the evidence of the first debate, with both men and their would-be deputies looking robotic and giving risk-averse answers seemingly designed to bore their opponents into submission.

The problem with the debate started with the fact that both sides had all the moderators' questions a week beforehand, though the full slate of quesitons was not asked.

Indonesia's election commission argued that this would allow the candidates to give substantive answers and better inform voters.

Instead, it sucked much of the life out of the debate – especially compared to the free-flowing 2014 presidential contest – as Widodo, his deputy Ma'ruf Amin, Prabowo and his deputy Sandiaga Uno delivered rehearsed answers, and did so poorly.

Both sides danced around each other for close to two-and-a-half hours (indeed, Amin took nearly an hour before he spoke to answer a question) and the voters, for the most part, would be not much wiser. 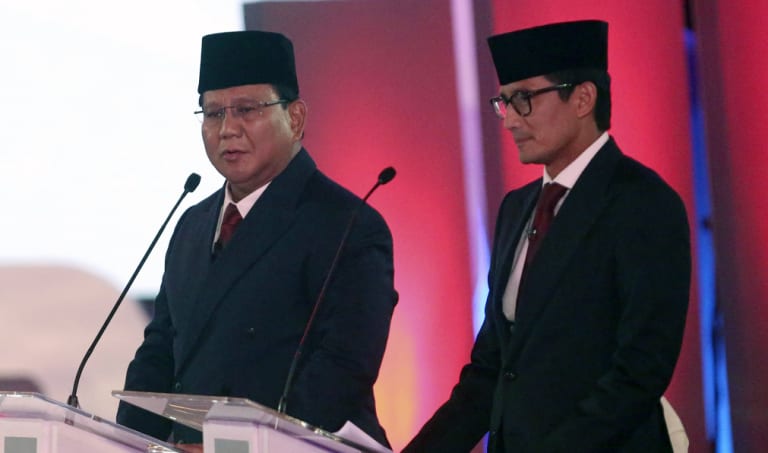 Widodo began optimistically, promising more progress in delivering education, health and further land reform if given another five years. But the Obama-like candidate of 2014, who promised hope and change, is now a known quantity.

Prabowo, who projects the image of a strongman that befits his years in the Indonesian military, promised stronger legal institutions, better salaries for public servants to reduce corruption and to ensure all Indonesians benefited from the country's vast natural resources wealth.

That last proposal was rejected by the President, who said public servants' salaries were sufficient, but that incentive payments were available for those who earned them.

But both men gave few details about how they would ensure that human rights were not sacrificed by law enforcement agencies fighting terrorism; both said the the right thing about showing respect for Indonesia's religious and ethnic minority groups, and for the disabled; and both vowed to tackle the maze of overlapping national and local legal regulations that can make it so difficult to do business in Indonesia, though again with few details.

One of the few answers from Amin, a senior Muslim cleric, on how to fight terrorism was one of the most (relatively) incisive of the night.

Terrorism is not jihad, he said, and it is haram [forbidden]. If the root cause of terrorism was a person's misunderstanding of his or her religion, Amin said, then they needed to be re-educated. But if the root cause was the economy, then the government's approach should be focused on providing jobs.

Uno, who made several solid contributions – and who at times seemed to be auditioning to be a presidential candidate in 2024, when Widodo (if he wins this time) cannot run again for a third time – stressed the need to provide economic opportunity to tackle terrorism and corruption.

In the final stages, when the candidates asked each other questions they had not been forewarned about, the debate came to life a little, with Widodo putting Prabowo on the back foot when he asked first about why his party had so few women involved, and then later why – if Prabowo was so committed to tackling corruption – he had so many candidates who had been convicted of corruption in the past.

On balance the President won the debate as he was able, more often, to provide more detailed policy responses – though he was at times too technocratic.

The debate ended with no new big ideas advanced and little light shed on either candidate's policies.

Perhaps fittingly, neither man could even manage the inspiration to say something positive about the other when invited to do so at the end of the night.