Hong Kong: When the Foreign Correspondents' Club of Hong Kong decided in late July to invite an obscure political activist to speak at the elegant 19th-century building that is its home, there was a vague sense among its board that the move might upset some people.

Their guest, Andy Chan, was the leader of a fledgling political party with at most a few dozen members but a provocative goal — the secession of Hong Kong from China — and the local authorities were preparing to outlaw the party as a threat to public order and national security. 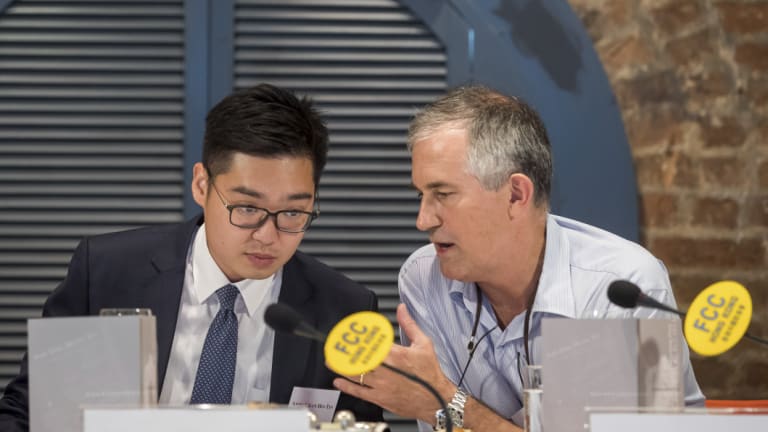 Still, few expected the reverberations that followed: Beijing demanded the club cancel the speech. Hong Kong expelled a prominent journalist after the club refused. And the backlash raised questions about the city's future as a haven where rule of law and civil rights are better protected than elsewhere in Asia.

"I would say it is the biggest mistake the Hong Kong government has ever made," said Fu Hualing, a law professor at the University of Hong Kong, of the decision to expel Victor Mallet, the Asia news editor of The Financial Times. "It has a huge impact. I don't know whether it was intended or not, but it has been felt everywhere."

Diplomats from the United States, Britain and the European Union have asked for an explanation. Multinational businesses are worried about Hong Kong's future as a regional base. And some journalists say the "death of Hong Kong"— a phrase commonly heard before the former British colony's return to Chinese rule in 1997 — has finally arrived.

The controversy has also focused global attention on the cause of Hong Kong independence, which the authorities badly want to suppress, and on the divided allegiances of Hong Kong's leaders, who are supposed to serve the city and defend its special status but owe their jobs to the Communist government in Beijing.

Carrie Lam, Hong Kong's chief executive, has dismissed as "pure speculation" what almost everyone in Hong Kong has concluded — that Mallet's forced departure was an act of retaliation signalling a new limit on political speech. Yet, she has offered no other explanation.

Her predecessor, Leung Chun-ying, was the public face of the attacks on the club — in a return to the spotlight that advertised his loyalty to Beijing, set up a political litmus test and might have limited Lam's options. 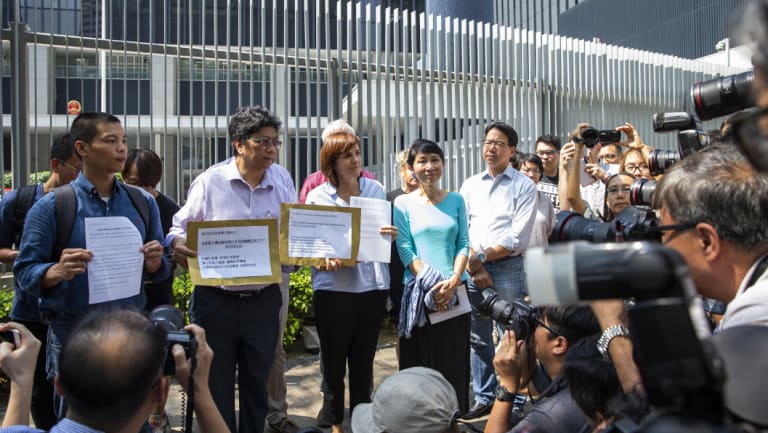 Members of the Alliance of Hong Kong Media with statements and a petition during a rally outside the Central Government Offices in Hong Kong.Credit:Bloomberg

Asked whether Leung had anything to do with the expulsion, Lam replied, "Certainly not." But she offered a less categorical denial when pressed on Beijing's role in visa decisions.

"I am responsible to the Hong Kong SAR and the people," she said, referring to the city's status as a special administrative region. "I am also accountable to the central people's government."

Most people in Hong Kong had never heard of Chan or his Hong Kong National Party when the government proposed outlawing the group.

"The only reason we initially thought of inviting this 28-year-old interior designer was actually that he was in the news," Florence de Changy, the French journalist who is the president of the Foreign Correspondents' Club, wrote in its magazine.

With its restaurants, bar and meeting rooms, the club has been a fixture amid Hong Kong's skyscrapers since the colonial era. Though most members are lawyers, bankers and other professionals, journalists run the organisation and host events featuring speakers from a variety of backgrounds.

Days after Chan's talk was announced, two officials from the Chinese Foreign Ministry visited the club and met Mallet, who was acting as president because de Changy was out of town. They objected to the event and told him they wanted it cancelled.

The demand leaked the next day. A day later, Leung took to Facebook to denounce the club, saying that hosting an advocate of independence would be tantamount to inviting a Nazi or terrorist to speak and cross an "absolute and clear red line".

In more than a dozen posts in the following days, he criticised the club's leaders and urged scrutiny of what he called a "special deal" that allowed the club to rent its building from the government at discounted rates.

But Lam publicly contradicted her predecessor by saying the club paid market rent. And while she criticised the decision to host Chan as "completely unsuitable," she declined to endorse Leung's demand that the speech be cancelled.

On August 14, with protesters outside the club, the event went ahead. "The nature of China is oppression," Chan declared.

A month later, the government outlawed his party, setting a precedent that critics warned could be used against the pro-democracy opposition.

Then, in the first week of October, the government rejected a routine request to renew Mallet's work visa. The decision stirred fears because Hong Kong had never expelled a journalist before — and because the move came straight from Beijing's play book.

The Chinese government has expelled several foreign reporters from the mainland in recent years after objecting to their coverage. Hong Kong had always been different, a critical listening post where journalists could write freely about events in China.

In recent years, local media outlets have come under some pressure to censor themselves, but foreign news organisations using Hong Kong as a regional hub — including The Financial Times, The New York Times and CNN — have largely been immune. Mallet's expulsion, however, could change that.

"They have moved the goal posts," said Zoher Abdoolcarim, the former Asia editor for Time International.

The decision has also cast a shadow over Hong Kong's future as a capital of international finance and commerce, with some in the business community saying privately that it could tip the balance for companies already being wooed to relocate to Singapore.

None of the big banks and law firms in Hong Kong have spoken out about the expulsion. The silence can be attributed in part to hope that new pressure on foreign journalists will not affect foreign companies. But there is also reluctance to say anything that may put business in China at risk.

In a survey by the American Chamber of Commerce in Hong Kong this year, more than half of respondents said they believed rule of law in the city had eroded.

Tara Joseph, the president of the chamber, initially appeared to play down Mallet's expulsion. But she issued a statement the next day saying it sent "a worrying signal".

Xi Jinping, China's top leader, made his concerns about Hong Kong independence clear during a visit to the city last year, when he warned that challenging the authority of the central government was "absolutely impermissible."

Management of Hong Kong affairs is usually handled by another member of the Politburo, but Xi seems to have taken the lead in setting policy, as he has on most major issues in China.

Tian Feilong, executive director of a research institute on Hong Kong policy in Beijing, said the territory must be more humble and accept that it is like other local governments in China.

"In the 'new era' of China," he said, referring to one of Xi's slogans, "Hong Kong must follow the main strategy of China." He added: "This requires Hong Kong to change its original proud attitude."

Support for Hong Kong independence was largely unheard of a few years ago. Newspapers that backed or were controlled by Beijing were the first to use the phrase frequently, deploying it as an epithet to attack the pro-democracy opposition, said Ying-ho Kwong, a PhD candidate at the University of Hong Kong studying local politics.

That changed in 2014 with the Umbrella Movement, the student-led street demonstrations demanding free elections. When Beijing refused to make concessions, some young activists — including Chan — concluded that independence was the only way Hong Kong could become a democracy.

Last month, after Hong Kong Polytechnic University covered up a few pro-independence posters and stickers, three students staged a hunger strike and more than 2000 others signed a statement of protest. Two days later, the university allowed students to regain control of the space where the posters were hung, known as the Democracy Wall.

"Freedom of expression is one of the things that has always separated Hong Kong from China," said Lam Wing-hang, 21, president of the student union and one of the hunger strikers. "I don't want to see Hong Kong become just another mainland city."