Berlin: The fate of German Chancellor Angela Merkel's ruling bloc hangs in the balance  as a coalition dispute over migration policy reaches its endgame.

Merkel's Christian Democratic Union and its Bavarian sister party were  to hold joint talks  in Berlin in an effort to broker an 11th-hour compromise after separate discussions that dragged into the early morning hours of Monday failed to end the standoff. 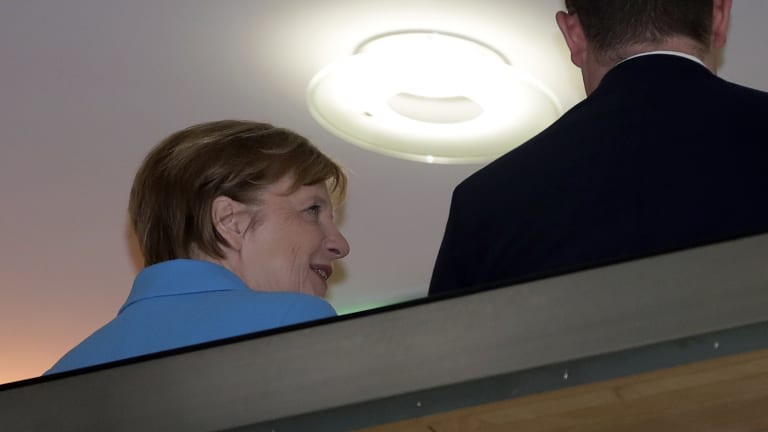 German Chancellor and chairwoman of the German Christian Democratic Union (CDU), Angela Merkel, talks to party members alongside a party’s board meeting in Berlin on Monday, July 2.

Interior Minister Horst Seehofer, who heads the Bavarian Christian Social Union, said he had proposed resigning from Merkel's cabinet but put that threat on hold to allow for more talks with the CDU in the hopes of reaching an understanding "for the sake of the country" and the coalition government.

"All other steps will be decided after the discussion" with Merkel's party, Seehofer said after the CSU meeting ended shortly before 2 am on Monday.

The last-ditch attempt at an agreement follows a day of drama on Sunday that ended with Merkel's party rallying behind the chancellor and the migration plan she helped negotiate with fellow European Union leaders last week. That backing raised the pressure on the CDU's Bavarian ally – one of three coalition parties – to back away from a full-blown government crisis.

As Merkel's party leadership met in Berlin, Seehofer encountered dissent in Munich in a meeting with the board of his CSU party, with divisions emerging over whether to pursue his plan to start turning away asylum seekers at the border in defiance of the chancellor. After some eight hours of negotiations, Seehofer offered to quit his cabinet and party posts, while others asked him to stay. 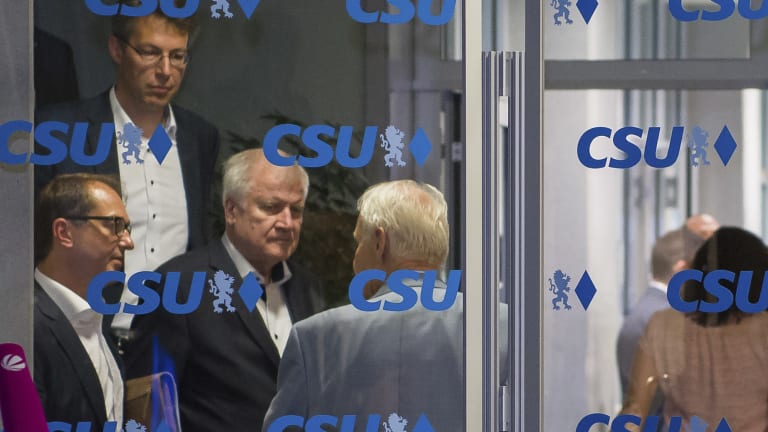 German Interior Minister Horst Seehofer, third left, is pictured during a board meeting of his Christian Social Union CSU in Munich, southern Germany, on Sunday night.

The source of the impasse is a migration plan hatched by Seehofer to take unilateral action to turn back migrants who have been registered first in another EU country. Merkel rejects such a move as a threat to Europe's passport-free travel area that could undermine the whole EU.

"We clearly decided we don't want to jeopardise, with unilateral border rejections, what we've achieved in Europe," Elmar Brok, a senior European lawmaker and CDU board member, told DLF public radio on Monday.

Without a compromise, both sides risk a historic breakup of the party bloc that's governed Germany for most of the time since World War II. That would escalate a political crisis that could leave Merkel without a parliamentary majority and throw the CSU into the political wilderness ahead of regional elections in the fall. With the stakes so high, senior CDU members urged the Bavarian party to pull back from its brinkmanship.

"They need to get their act together," Daniel Guenther, the CDU premier of Schlewsig-Holstein state, said of the Bavarian party on ARD television. "Germany has been holding its breath for two weeks because of this internal conflict. We finally need to start looking to the future."

With the number of migrant arrivals dramatically down from the 2015 peak, there is speculation in Germany that the impasse is a conservative attempt to oust Merkel rather than tackle asylum and refugee flows. Bavarian state premier Markus Soeder, a leader of his party's hard-line faction, told Sunday's closed-door meeting that the CSU didn't want to bring down Merkel's government, but would stand up for what is right, DPA reported. 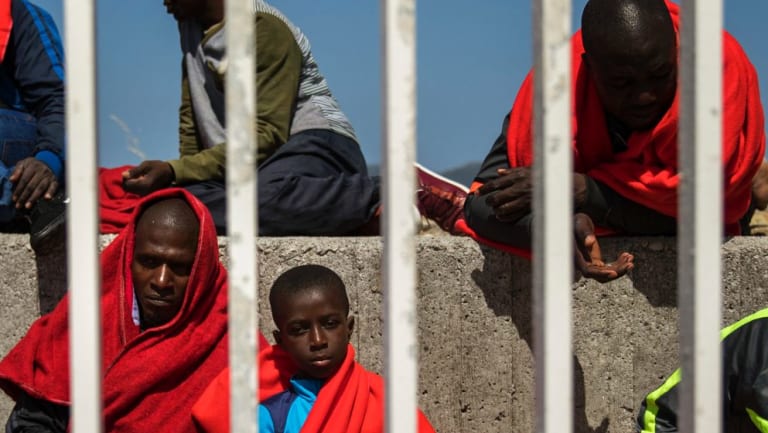 Migrants rest at the port of Algeciras, southern Spain, as they wait to be transported to a police station after being rescued in the Strait of Gibraltar, on June 26.

Merkel reaffirmed her opposition to one-sided national measures against migration in a ZDF television interview earlier Sunday, and said she wanted to keep her Christian Democrat-led bloc together.

"I'd like the CDU and CSU to continue working together because we're a success story for Germany," she said. "We share the goal of reducing the number of arriving migrants."

The dispute is nevertheless the latest sign of rising political risk and fraying alliances in Europe's biggest economy since support for Merkel's dropped bloc to an almost 70-year low in a national election last year. After the inconclusive ballot, Merkel needed two tries and almost six months, a postwar record, to stitch together her fourth-term government.

Polls suggest public support is waning for the CSU's stance and the regional leaders promoting it. Last week, an FG Wahlen survey said 91 per cent favour European solutions on migration, an endorsement of Merkel's line and a snub to Bavaria's nationalist push for unilateral border measures.

Bavaria became a migration flashpoint during Europe's refugee crisis in 2015 and 2016 as the main transit point into Germany. Gains by the far-right, anti-immigration Alternative for Germany party, or AfD, have returned the topic to the CSU's agenda ahead of a state election in October.