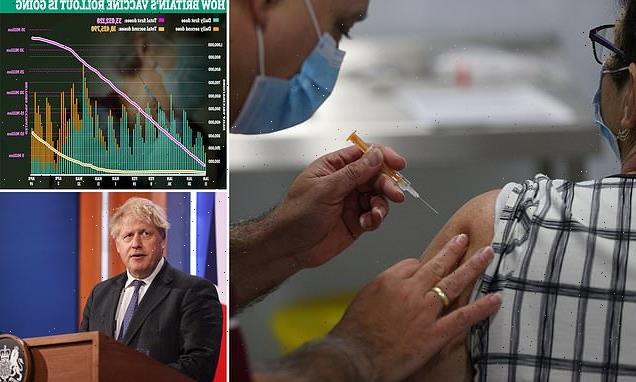 Just 32 Britons have been hospitalised with coronavirus after being vaccinated, ‘extraordinary’ findings show

Just 32 people in the UK were hospitalised with Covid-19 after receiving a vaccination for the virus, a new study has found.

Research by the UK Coronavirus Clinical Characterisation found that of the 74,405 patients that were treated in hospital for coronavirus between September and March, just 32 had been given a jab at least three weeks before.

The ‘extraordinary’ findings, which show the efficacy of the vaccines, comes as figures showed there are now just 1,973 patients with Covid-19 in hospitals around the UK, down from a peak of 39,249 on January 18.

It also come as Boris Johnson yesterday told the nation that while the vaccination programme was ‘making a big difference’ he would not deviate from his ‘cautious but irreversible’ roadmap. 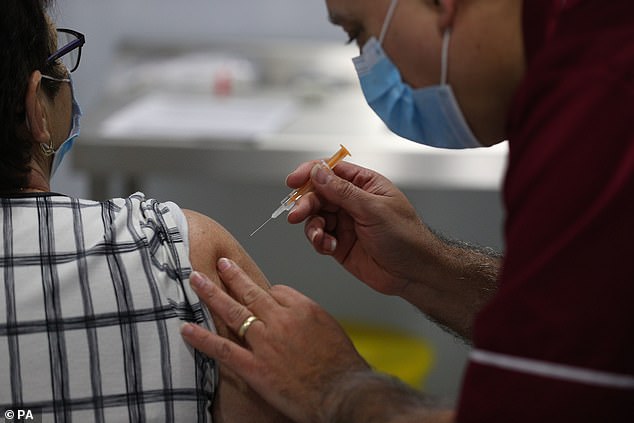 Only 32 people who were given the coronavirus vaccine were hospitalised between September and March, a new study has found. Pictured: A person receives a does of the AstraZeneca vaccine at the Winter Gardens in Blackpool 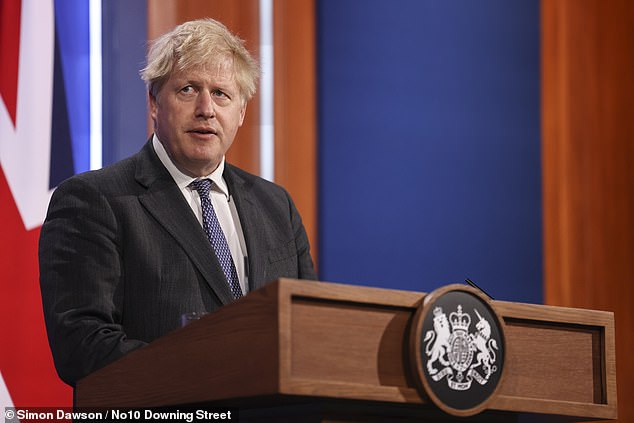 The statistics relate to Britons who were given just one dose of the vaccine.

Scientists are expected to hand the latest figures to ministers this week and a detailed report will also be sent to the Scientific Advisory Group for Emergencies (Sage), The Telegraph reports.

Researcher from the University of Liverpool, Professor Calum Semple, told The Telegraph: ‘What this shows is that in a real-world situation the vaccines are highly effective – not only do they work, but they work extraordinarily well.’

The study comes after figures showed 33,032, 120 people in the UK have now been given their first vaccine doses and 10,425,790 have received their second dose.

Meanwhile virus cases have fallen to a seven-month low and deaths are now averaging just 26 a day.

This is the lowest figure since the September 6, when far less tests were being carried out.

Yesterday another 2,524 cases and 33 deaths were reported, taking the UK’s weekly average for daily deaths to just 26.

More than 1,820 deaths had been recorded on January 20, the deadliest day of the pandemic.

The figures come as Mr Johnson faces calls to speed up his cautious lockdown-easing plans, which will not see the next set of restrictions eased until May 17. 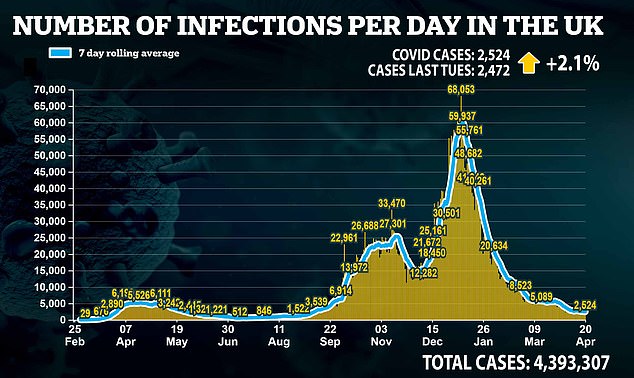 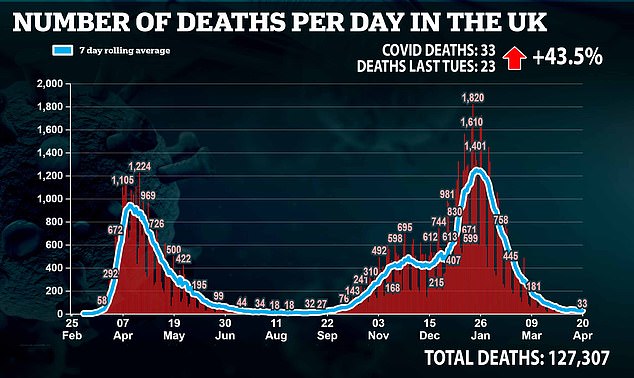 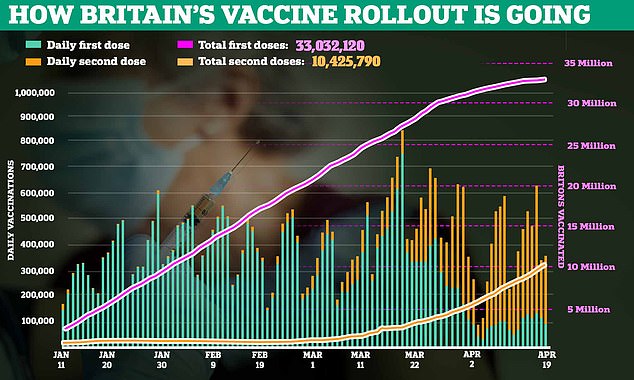 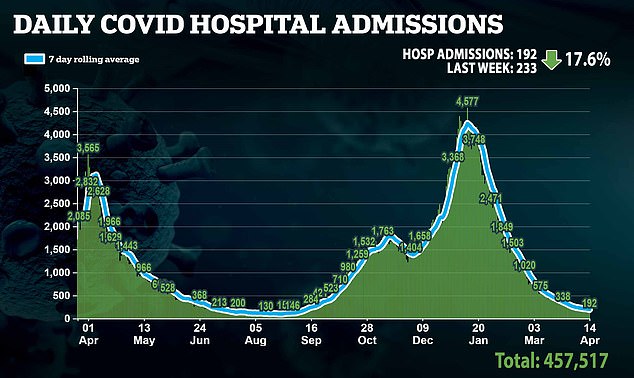 Yesterday a separate Office for National Statistics report revealed that overall deaths in the UK had dropped below the five-year average for the past five weeks.

Yesterday Boris Johnson told a Downing Street press conference: ‘We know that this vaccination programme is making a big difference.

‘We know that it’s helping to reduce suffering and save lives, potentially on a very big scale.

‘But we don’t yet know the full extent of the protection that we are building up; the exact strength of our defences – and as we look at what is happening in other countries with cases now at record numbers around the world, we cannot delude ourselves that Covid has gone away.’

He added: ‘I see nothing in the data now that makes me think we are going to have to deviate in any way from the road map – cautious but irreversible – that we have set out.

‘But the majority of scientific opinion in this country is still firmly of the view that there will be another wave of Covid at some stage this year and so we must – as far as possible – learn to live with this disease, as we live with other diseases.’ 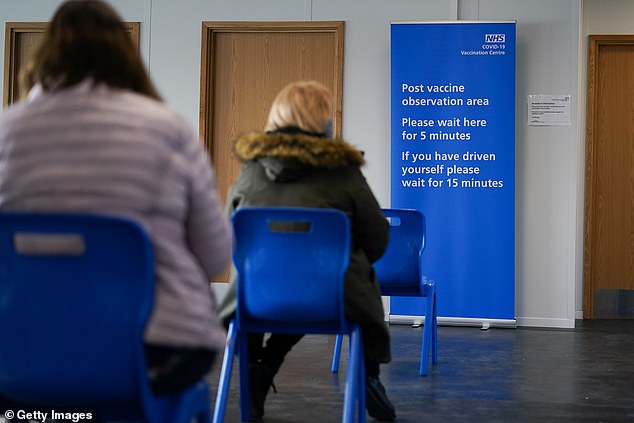 It came as the Prime Minister revealed people in the UK could be offered pills to treat Covid at home from autumn this year thanks to a new antivirals taskforce being set up by No10.

Boris Johnson said he will assemble a team of scientists to find ways for people to recover from the virus without going into hospital because the UK must ‘learn to live with this disease, as we live with other diseases’.

No drugs have been decided on but the government is already in talks with pharmaceutical firms about ‘promising’ antiviral treatments being developed, and officials are keen to get new drugs that aren’t already used.

Mr Johnson said the drugs could ‘provide another vital defence against any future increase in infections and save more lives’, and there are hopes they will help stop the new variants making people seriously ill.