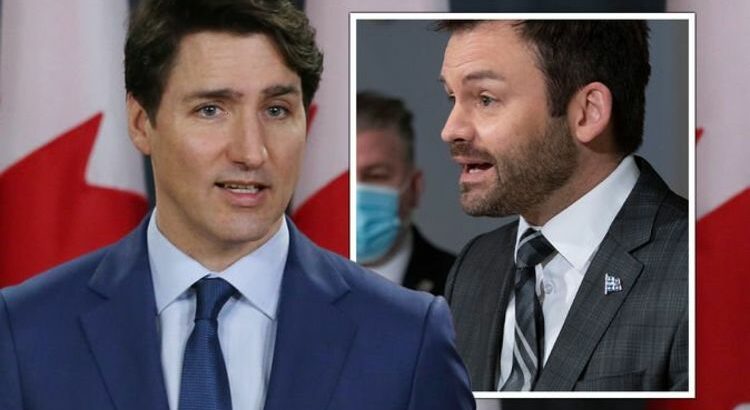 Mr Trudeau has won a third term as Canada’s Prime Minister, early vote counts show. He called a snap election last month, confident that his record on handling the country’s coronavirus epidemic would push him over the line. As Liberal Party captured most of the votes, he said he now has a “clear mandate” to get the country through its health crisis.

He took hold of 157 seats but fell 13 short of the 170 needed for a majority in the House of Commons.

It means that Mr Trudeau, 49, will have a second consecutive minority government, and will have to rely on other parties to govern.

Other parties trailed behind him, including the Quebec-based Bloc Québécois, who were down three seats to 28.

It is a federal party who, among other things, wish to take Quebec out of Canada and turn it into an independent state.

Bloc Québécois and other prominent Quebec independence parties like Parti Québécois have long worked closely on the issue of independence and slammed Mr Trudeau for what they see as the Canadian Prime Minister having a “colonial” grip over the French-speaking state.

In his first interview with a UK or European newspaper earlier this year, he told Express.co.uk that Mr Trudeau continued to commit “injustices” against the French speaking population.

But Quebecers have already had two votes on independence: in 1980, the ‘No’ vote won by a considerable majority, yet only 15 years later managed to close this gap and missed out on a ‘Yes’ vote by a percentage point.

But despite this, Mr St-Pierre Plamondon continues to call on Mr Trudeau to give Quebec the power to strike a vote.

JUST IN: EU shamed by ‘bigger, tougher’ UK and US after Australia defence pact

Asked why Quebec wanted independence after failing twice, he said: “There’s a historical argument for justice.

“French Canadians throughout their history have suffered from colonialism, they still do, and it’s the same thing for First Nations people in Canada.

“It’s very hard to accept that in 2021 we’re not yet under the mould of democracy.

“It’s colonialism and it should be put in the rubbish; colonialism should be eradicated from our lives because it has consequences.”

He noted that Canada’s head of state is Queen Elizabeth II, as the country is a Commonwealth Realm.

Mr Trudeau and the Queen are known to share a good relationship, the Prime Minister having first met the monarch as a child in 1977 when his father held the role.

It wasn’t until 2015 that they saw each other again.

Here, the Queen remarked: “Very nice to see you again, in rather different circumstances, isn’t it?”

Mr Trudeau replied: “I will say, you were much taller than me the last time we met.”

He then gave a speech at Canada House on Trafalgar Square and noted the “important” role the Queen had played in Canada’s history.

While Mr St-Pierre Plamondon recoils at the “injustices”, the Anglophone population in Quebec has received backlash in recent years.

In 2019, the state denied immigrant status to a French citizen because she was unable to demonstrate adequate French-language proficiency.

Quebec rejected Emilie Dubois’ application because part of her university thesis was in English, according to the BBC.

Many English speakers have also voiced fears they are being squeezed into insignificance.

In 2013, when Parti Québécois came into power, it pushed new laws through the provincial parliament that looked to further reduce the use of English in schools, hospitals and shops.

The state even has its own “language police” with inspectors from L’Office quebecois de la langue française enforcing the rule that the lettering of French signs should be three times bigger than that of other languages.

While French Quebecers have and still experience difficulties, many note that First Nations people — whose land was taken from then by French and British colonists — continue to face much strife.

In the past 30 years, 4,000 indigenous women and girls are believed to have been killed or gone missing in Canada, although the true number is unlikely ever to be known.

Little has been done to probe the crisis.

This is added to the 60 percent of indigenous communities that died within years of European settlers arriving, according to a 2016 study.

Meanwhile, following his victory, Mr Trudeau thanked his supporters and promised to work with all the parties for the good of Canadians.

He said: “You are sending us back to work with a clear mandate to get Canada through this pandemic and to the brighter days ahead.

“You have given this government and this parliament clear direction.”