Canada hit back at the United States on Friday with retaliatory tariffs on American summertime essentials such as Florida orange juice, ketchup and Kentucky bourbon in its opening salvo in a trade war with President Donald Trump.

As temperatures and tensions increase, the measures targeting Can$16.6 billion (US$12.6 billion) in US steel, aluminum and consumer goods will take effect on Sunday, when Canadians celebrate a national holiday and just days before Americans celebrate Independence Day amid a heatwave expected in both countries.

The tit-for-tat duties are a response to the punishing US steel and aluminum tariffs imposed at the start of June. Ottawa also unveiled Can$2 billion (US$1.5 billion) in aid for the two sectors and their 33,500 workers. 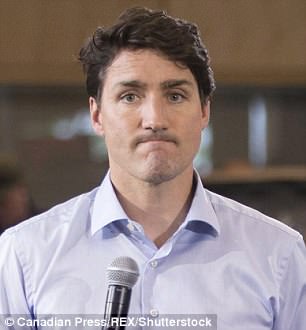 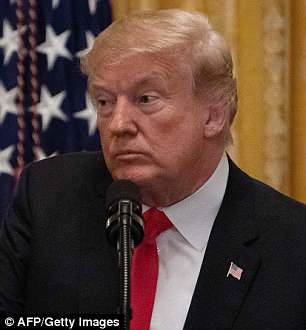 Stand-off: Justin Trudeau’s government’s tit-for-tat duties are a response to the punishing U.S. steel and aluminum tariffs imposed at the start of June by Donald Trump’s administration 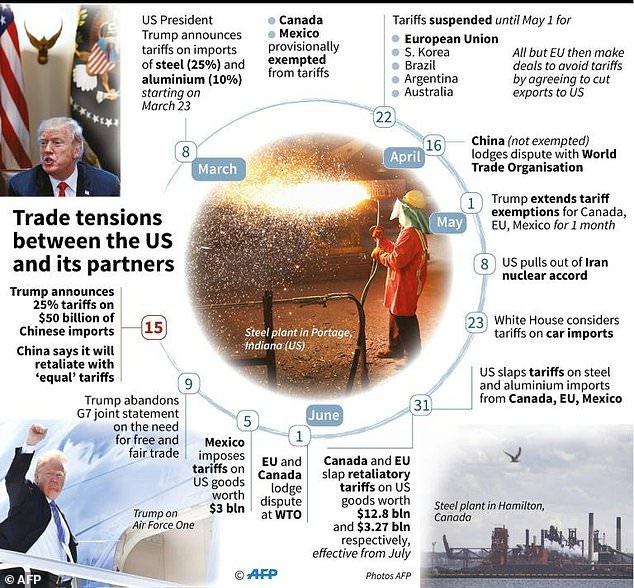 Timeline of trade tensions since the US decision to impose tariffs on steel and aluminium imports, including on allies like Canada, Mexico and the EU, and after US President Trump imposed 25 percent tariffs on tens of billions in Chinese imports 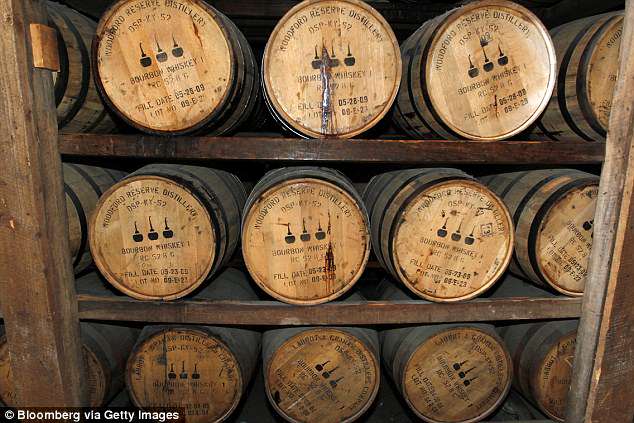 Take that Mitch: Kentucky bourbon is being hit with a 10 per cent tariff in Canada

‘Canada has no choice but to retaliate with a measured reciprocal dollar-for-dollar response,’ said Foreign Minister Chrystia Freeland, making the announcement at a steel facility in Hamilton, Ontario where she was flanked by brawny workers in yellow hardhats.

‘We will not escalate and we will not back down,’ she added while noting that this trade action was the strongest Ottawa has taken since World War II. But she said the move was made with ‘regret’ and ‘very much in sorrow, not in anger’ against a close ally.

The list of more than 250 US goods subject to Canadian duties – including Florida juice, Wisconsin toilet paper or North Carolina gherkins, which are labor intensive to produce – aim to pressure Trump supporters in key states in November’s US midterm elections.

The penalties will add 25 percent to the cost of US steel, and 10 percent to aluminum and consumer goods.

Canada and Mexico initially were exempted from the US metals tariffs — as was the European Union — but Trump allowed the duties to take effect June 1 after talks stalled to revamp the 1994 trilateral North American Free Trade Agreement (NAFTA).

‘These retaliatory tariffs underscore the complete hypocrisy that governs so much of the global trading system,’ he said in a statement, and ‘do great damage to the multilateral trading system.’

Business executives warned lawmakers this week that escalation into an all-out trade war would be devastating to the Canadian economy, which sends about 75 percent of its exports to the United States.

If Trump steps up his attacks on Canada’s economy and imposes a 25 percent tariff on automobiles as threatened, it would lead to ‘carmageddon,’ Flavio Volpe, president of the Automotive Parts Manufacturers Association, told a Commons committee hearing on Tuesday.

Canadians, however, are overwhelmingly in favor of the retaliation.

In Ottawa, officials and others have declined an invitation to the US ambassador’s annual July 4th bash.

‘I’ve politely declined because I’m not happy with the direction of the American government and their constant attacks on our country,’ Ottawa Mayor Jim Watson told public broadcaster CBC.

Canadian patriotism, meanwhile, has flourished under hashtags like #BoycottUSA, #BuyCanadian and #VacationCanada that urge people not to buy American goods and travel packages. 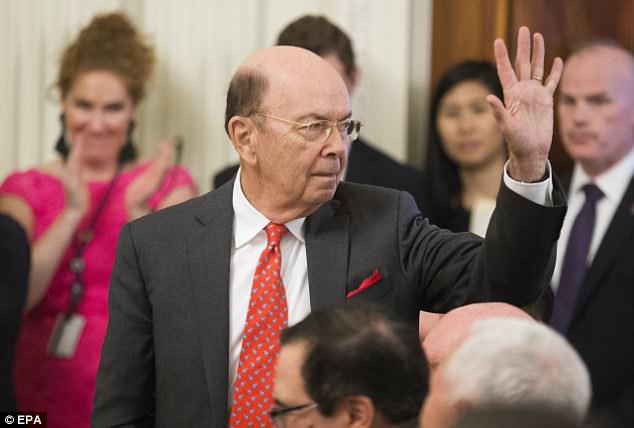 US Commerce Secretary Wilbur Ross last week defended the Trump administration’s tariffs before Congress but admitted that Canada’s steel industry was ‘not being accused of directly or individually being a security threat.’

Canada and the US are among the world’s two largest trading partners with an estimated $673.9 billion worth of goods and services exchanged in 2017, with the US scoring a small surplus ($8.4 billion), according to the US government data.

The United States also is the top destination for Canadian vacationers, who made 42 million trips to the US in 2017.

But relations between these two neighbors have plunged to their lowest in decades, reaching new depths at the recent Group of Seven summit when Trump abruptly rejected the joint statement and insulted Canadian Prime Minister Justin Trudeau.

On the campaign trail this week, Trump continued his attacks on Canadian dairy, wheat and duty-free customs allowances for Canadians returning home, saying they were scuffing up brand new shoes in order to sneak them in.

US Commerce Secretary Wilbur Ross last week defended the Trump administration’s tariffs before Congress but admitted that Canada’s steel industry was ‘not being accused of directly or individually being a security threat.’

She also repeated that Trump’s decision to invoke national security to justify the US tariffs on steel and aluminum imports was ‘insulting’ to Canadian veterans who had stood by their US allies in conflicts dating back to World War I.

The United States has a $2 billion trade surplus on iron and steel products, and Canada buys more American steel than any other country, accounting for 50 percent of US exports, Freeland said.

WHAT IMPORTS FROM U.S. TO CANADA ARE HIT IN TARIFFS WAR

These are some of the 240 items listed by the Canadian government as subject to tariffs if they are imported from the U.S.