Three people were killed and eight wounded in the capital city amid renewed violence in recent months. 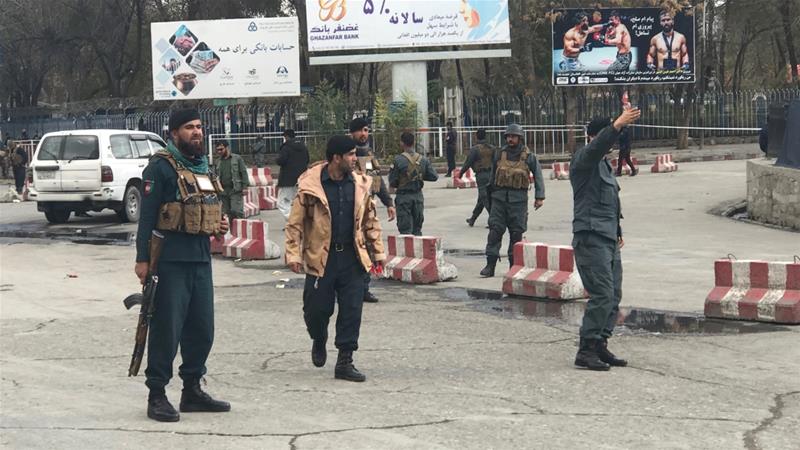 At least three people have been killed and eight wounded after a suicide bomber hit a protest site in the Afghan capital, Kabul, according to local media reports.

Tolo News, a Kabul-based news website, reported the blast happened on Monday close to Pashtunistan Square, where hundreds of people had been protesting over insecurity in the country.

Nasrat Rahimi, the deputy spokesman for the interior ministry, said, “The suicide attacker on foot wanted to target protesters, but he was stopped at a security checkpoint some 200 metres from the site.”

“There have been casualties and I can say most of them are security forces.”

Videos posted on social media appeared to show bodies lying on the ground moments after the bombing.

The explosion came as Taliban fighters killed scores of security forces in the western province of Farah and the eastern province Ghazni overnight on Monday.

Earlier, at least 37 local policemen were killed in Farah and 20 members of the Afghan security force were killed in Ghazni’s Jaghuri district on Sunday.

Taliban spokesman Zabihullah Mujahid claimed responsibility for the Ghazni attack and said in a text message that the armed group had captured Malistan district.

Fighting in the area has been ongoing since Wednesday, fanning fears that the violence could be rooted in ethnic or sectarian differences.

Taliban fighters have ramped up attacks on Afghan security forces and government facilities in recent months, leaving troops thinly stretched throughout the country.

A US watchdog agency said last week that the Afghan government was struggling to regain control of districts lost to the Taliban while casualties among security forces had reached record levels.

The government had control or influence over 65 percent of the population but only 55.5 percent of Afghanistan’s 407 districts, the Special Inspector General for Afghanistan Reconstruction (SIGAR) said in a report.