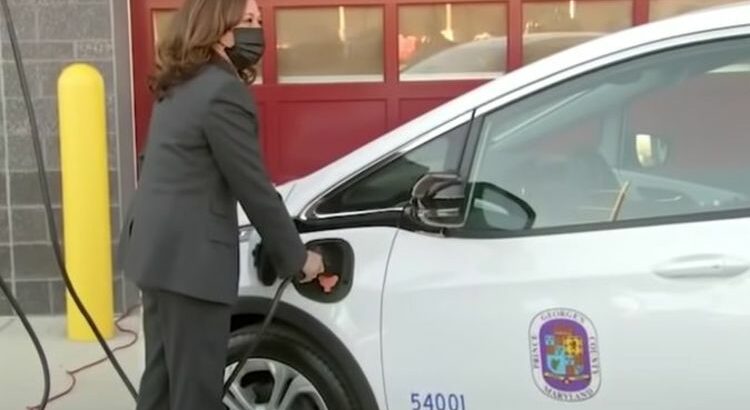 Kamala Harris mocked for being unable to charge electric car

The US Vice-President has been ridiculed after appearing to struggle to charge an electric car during a visit to a charging station in Maryland. Kamala Harris seemed to struggle to understand the new infrastructure and stood holding onto the charger as if standing at the petrol pump. Fox News aired the clip during host Sean Hannity’s talk show much to the amusement of the network’s guests.

Fox News contributor Jason Chaffetz told Fox News: “This is the person who is supposedly in charge of the National Space Council!

“Her job is to advise the President on how we’re gonna operate in space.

“She can’t even put a plug into a car. This is she it’s such a joke.

JUST IN: Up to 100 dead and many trapped as tornado rips through US states

Fellow contributor Leo Terrell added: “Well, everybody knows the fact she was selected for vice president for two reasons, gender and skin colour.

“She was picked for the wrong reason, and look, she runs away from the tough issues. Immigration, the border issue.

“She didn’t even know what to do with an electric car, does she hold the pump forever and ever.”

He added: “She is clueless.

“And I’ll be very clear. I’ve said this before her political career in 2024 is over because she’s unlikable.”

Recent polls have put President Joe Biden at around 42 percent of Americans approving of his leadership, and 52 percent disapproving.

A new Wall Street Journal poll has suggested polling between President Biden and former President Donald Trump, should he run again in 2024, have narrowed.

Meanwhile, 48 percent of voters polled preferred to return to Trump-era policies while 46 percent expressed they were happy with the status quo.

Mr Trump has refused to rule out a run for the White House in 2024.

While President Biden has said both publicly and privately that he plans to seek a second term in office.