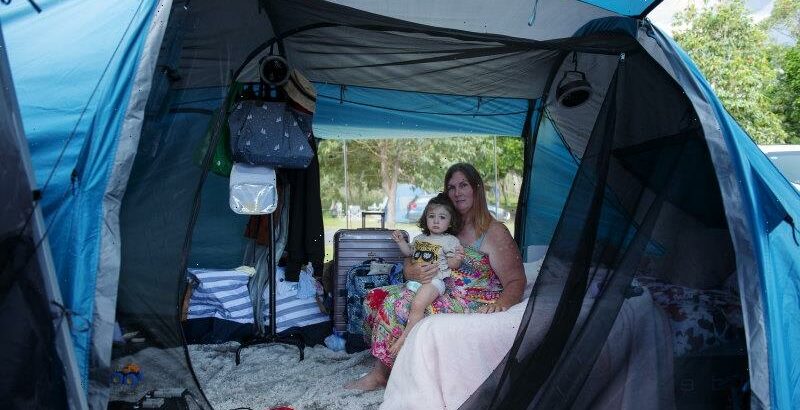 Karrina Kemp never expected to be living in a tent with three children, but that’s all she can afford while waiting to be allowed to cross the Queensland border.

Ms Kemp is one of more than 11,000 Queenslanders stranded in NSW or Victoria while waiting for border passes or exemptions to be allowed across the border. She is also one of several people who told The Sun-Herald they were sleeping in a tent or car as a result, mostly in NSW border towns and some in Victoria. 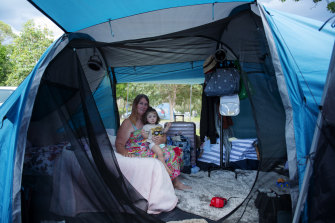 Karrina Kemp and her three children are living in a tent in Ballina while waiting to cross the border to Queensland.Credit:Elise Derwin

“The tent is literally starting to fall apart – it’s so windy here and I’ve had to do makeshift screen repairs,” Ms Kemp said. “It’s an eye-opener, that’s for sure. I didn’t think I’d literally be technically homeless at my age with three children.”

Ms Kemp, 43, is still paying $585 a week rent for her home in Bundaberg, and it costs an additional $360 a week to stay in the tent park in Ballina in northern NSW, where she has spent the past three weeks.

She said her daughter, 12, and son, 13, were “beyond frustrated and getting upset” about living in the tent and not being able to go home. Her youngest child, 18 months, is enjoying the outdoor exploration but having meltdowns when it rains, or it is time to come inside.

Ms Kemp and her children were staying with friends in Jindabyne for the ski season before the Delta outbreak in Greater Sydney, but she eventually had to leave because the property was sold. 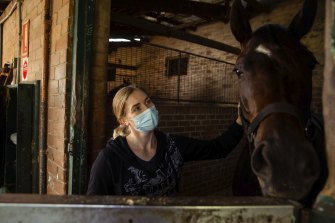 Katrina Haslam is 28 weeks pregnant and can no longer do her job as trick rider for race horses. She is waiting for permission to cross the border to join her partner in Brisbane.Credit:Dominic Lorrimer

The Queensland government rejected her request for an exemption to drive across the border and avoid hotel quarantine. She was advised to apply for a border pass, which means the family has to leave their car in Ballina to be towed later, fly to Brisbane via Sydney and pay more than $5000 for hotel quarantine as a family. She applied for the border pass on September 5 and is still waiting.

Queensland Premier Annastacia Palaszczuk said on Friday the state had increased the exemption unit to deal with thousands of applications, saying this was only necessary because of outbreaks in the southern states. She said it was a “very, very difficult time for families, not just here but families right across the country”.

Queensland Health had 2945 open applications for exemptions as of Friday, a reduction from 4228 on August 26. But a spokesperson said exemptions were usually only granted in “extreme exceptional circumstances” and most people needed to apply to Queensland Police for a border pass.

A Queensland Police spokesperson said in a statement it had 8310 outstanding applications from returning and relocating residents awaiting assessment and these would be processed in the order received. There are thought to be some duplicate applications, but a single application could cover an entire family group.

The requirement for hotel quarantine has created the bottleneck. Queensland Police said 2745 people were placed in quarantine in the state between September 6 and October 1.

While Victoria also has its border closed to NSW and requires returning residents to apply for a permit, Victorians are mostly allowed to self-isolate at home.

Queensland Health Minister Yvette D’Ath last week said her government had been warning people about travelling interstate since mid-June and people had gone “knowing what the rules were” and needed to be patient.

The Sun-Herald has heard from many people with compelling reasons for leaving Queensland or not returning sooner. For example, one man had his relocation delayed by triple-bypass surgery. Another went to NSW to visit his dying father and help his mother who has dementia and broke her hip, but needs to get back to his wife and children.

Some people are already in border towns holding out for an exemption or waiting until the border reopens because they can’t afford to pay for the flights, hotel quarantine and shipping cars and pets home.

Others applied for their border passes in August, only to be told they couldn’t apply more than a fortnight in advance. When they reapplied, they were told hotel quarantine was full, and they would join the back of the queue.

That is what happened to Katrina Haslam and Adrian Gray who have been separated for most of Ms Haslam’s pregnancy – first because they were working in separate cities and then because of the border closure.

Ms Haslam is in Sydney while Mr Gray is in Brisbane. Ms Haslam planned to relocate closer to the birth to reunite with her partner and applied for an exemption over a month ago and was knocked back. She then applied for a border pass at the beginning of September but is still in the queue and growing increasingly anxious as she is now 28 weeks pregnant and will still have to do two weeks’ quarantine when she arrives.

“This is our first baby so he’s missing out on the pregnancy and I’m doing it alone, which is not really ideal,” Ms Haslam said. “I also have a history of clots and I thought I’d be well and truly out of quarantine by the time I reached 30 weeks.”

Ms Haslam has no family from Sydney, being originally from New Zealand, and is living in a share house. She is yet to book a hospital for the birth because she had planned to be in Brisbane by then.

Mr Gray said it was just as stressful for him and he is now considering quitting his job and moving to Sydney to be with her. However, since Ms Haslam can no longer do her job because of the pregnancy – she is a trick rider for race horses and is now just doing a bit of work at the stables on the ground – it would be better if they don’t both wind up out of work.

For Ms Kemp, one of the most galling things is the NRL grand final being held in Brisbane on Sunday, with the border opened not just for players but their wives and girlfriends.

“I’m really angry actually, really deflated,” Ms Kemp said. “Football is not important. Reuniting families and getting people that are locked out should be more important than a football match.“