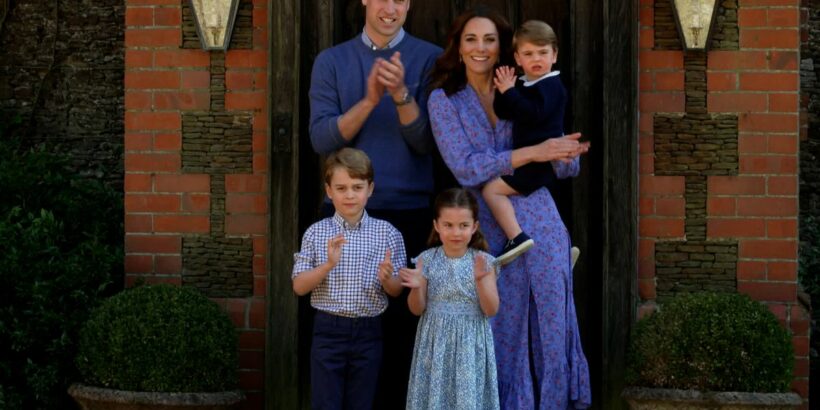 Prince William and Kate Middleton clashed on Saturday as their teams England and Wales went head to head in a Six Nations bout.

It was the first time the national teams have fought each other since Kate was named England Rugby's new patronage.

William is the patron for Wales Rugby, which means they were supporting different sides as they watched joined by their eldest son, eight-year-old Prince George.

But while the royal couple were out watching the match, some fans have been wondering who would be looking after Princess Charlotte and Prince Louis.

Speaking to OK!, Royal commentator Jennie Bond said that the younger Cambridge children will likely be spending the day with their "faithful and loyal" nanny, Maria, as well as Carole Middleton, Kate's mother.

Jennie says: "They, of course, have this very faithful, loyal nanny that they've had for years and so I think they know the children are always in safe hands.

"But the Middletons are very, very close as well to them, so I'm sure they step in and do the babysitting from time to time.

"They've got a great set up, William and Catherine, it's a very, very stable domestic set up with the nanny who's been in place for such a long time.

"And with the Middletons there, I think that's really important for the children. And I think that that's what William and Catherine both feel."

The eight-year-old sat between Prince William and the Duchess of Cambridge as they supported opposing sides at the Six Nations.

On Saturday, England played against Wales at Twickenham and won 23-19, which was the first after Kate became patron of England's Rugby Football Union (RFU).

William has fronted the opposing side, Welsh Rugby Union (WRU) since 2016.

Now the mum-of-three revealed her eldest son is learning how to play rugby, she explained: "He has all the kit."

After sharing that he's been learning how to tackle, he turned to his mum and cheekily said: "But I haven't tackled you yet!"

For the latest stories from the Daily Star, sign up for our newsletter by clicking here.