‘I have been threatened by my estranged family’: Kate Spade’s sister says she was warned after speaking out about designer’s battles with mental health – as her son says widower Andy is leading a ‘cover up’ and only cares about his own image

Kate Spade’s sister claims she’s been threatened by her family for speaking out about the designer’s battle with mental health  – as her son insists the family cared more about their image that getting her help.

Reta Brosnahan Saffo, 57, spoke to DailyMail.com about Spade’s suspected bipolar disorder and her obsession with suicide following the death of Robin Williams, after the mother-of-one was found hanged in her Park Avenue, New York apartment aged 55 on Tuesday.

The following day, she says she received a text from her estranged brother Earl Brosnahan telling her to keep her mouth shut. 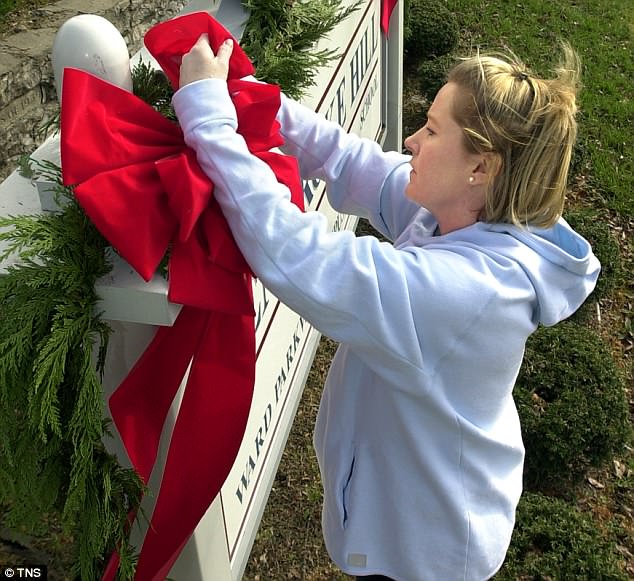 ‘I have been threatened by text messages from my estranged family today for having spoken out – for speaking the truth,’ she told TooFab.

He claims that his relatives – including Spade’s husband Andy – had been too concerned with trying to ‘cover up’ his aunt’s mental illness because they were worried how it could affect the brand.

‘My aunts and uncles, and even Andy and David are trying to do a cover up— acting as if she was not ill,’ he told the DailyMail.com, adding he was devastated by the loss of Spade.

‘We are reeling from the loss of such an amazing woman. It did NOT have to happen! 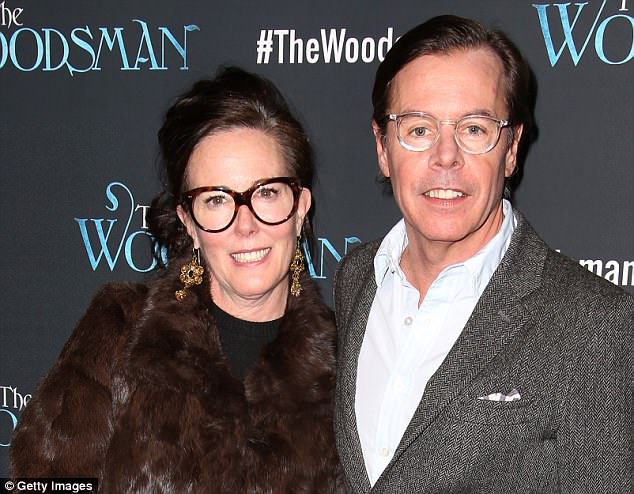 ‘She desperately needed help and my mother and I flew out to her summer home in Napa couple of yrs ago ago to get her into treatment— we came so close to getting her the help she needed, too, but ultimately we failed.

‘I grieve for my dear sweet cousin Bea— but not for my Uncle Andy. He only cared about her and his image!!!’

Reta Saffo, who previously said that Spade’s suicide was ‘not unexpected’ after a long battle with bipolar disorder, said her brother had texted her after she spoke about her sister’s loss, warning her to keep quiet.

‘A public example could equally be made of your private missteps. Be very mindful of what you say,’ Brosnahan, who is father of ‘Marvelous Mrs. Maisel’ star Rachel Brosnahan, reportedly texted Saffo.

Earl Brosnahan responded to the text message claims, telling the pop culture outlet that it was a shame certain people were ‘leaking false, speculative information.

‘We are grateful for the incredible outpouring of love and support the family has received over the last few days. We should all remember the beauty and joy that Kate brought to this world,’ he said in a statement. 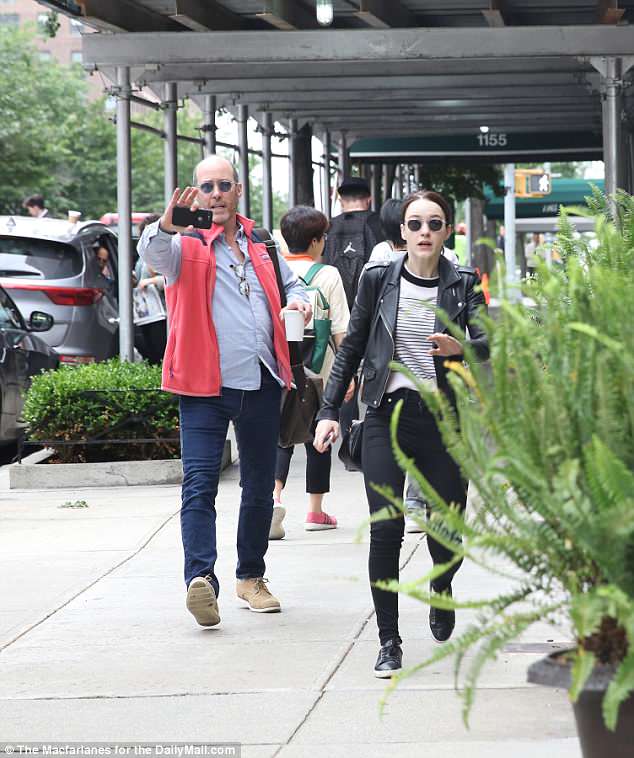 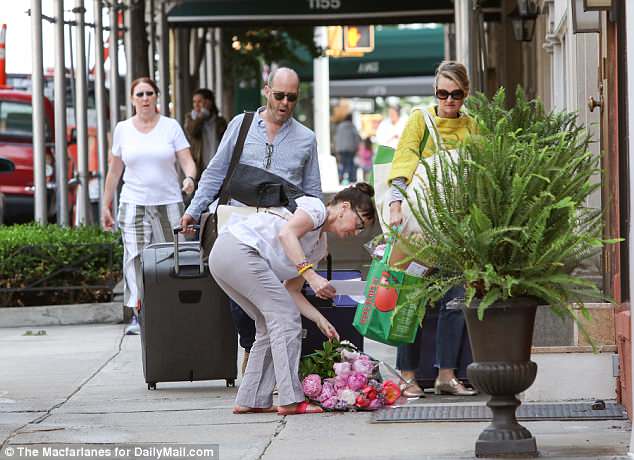 Kate Spade’s brother Earl Brosnahan (pictured with a friend, bringing flowers and suitcases to Andy Spade’s apartment in NYC on Friday) responded to the text message claims, saying it was a shame certain people were ‘leaking false, speculative information

‘But it is sad and very hurtful, given the pain the family is enduring, that people with no real knowledge of the situation are leaking false, speculative information that maligns Kate’s character and belittles the health issues she bravely fought,’ he added, asking for privacy for the family.

Spade, who shot to fame with her line of eponymous purses, was found unconscious and unresponsive’ by her housekeeper on Tuesday morning.

She is survived by her husband Andy, who is the brother of actor David Spade, and daughter Frances.

Andy did address his wife’s mental health issues in a statement to the New York Times, saying: ‘Kate suffered from depression and anxiety for many years. She was actively seeking help and working closely with her doctors to treat her disease, one that takes far too many lives.’ 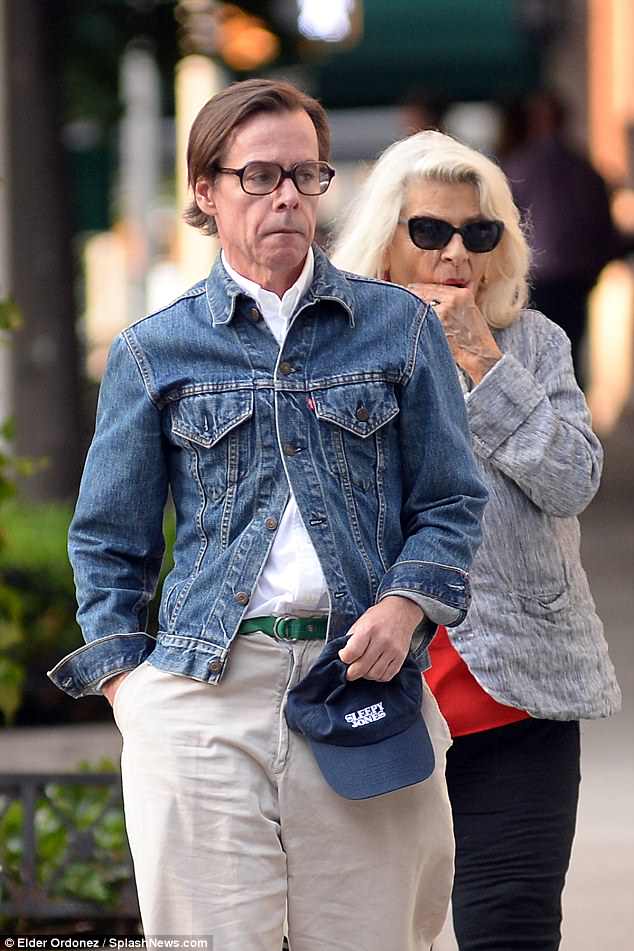 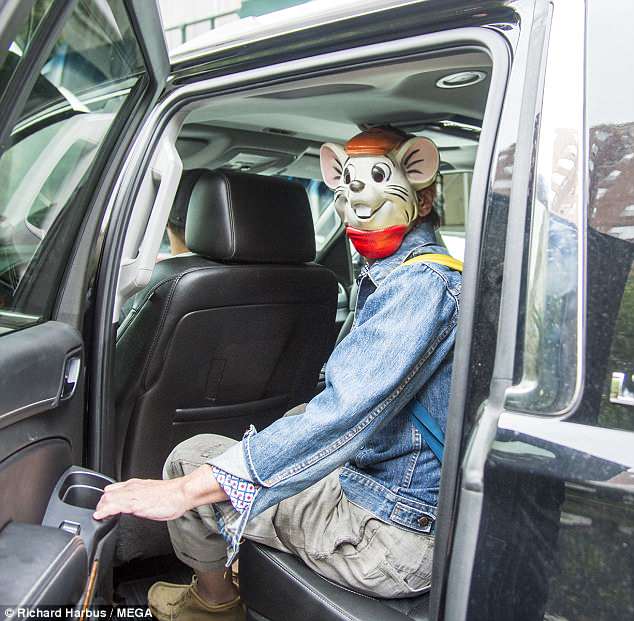 ‘We were in touch with her the night before and she sounded happy. There was no indication and no warning that she would do this. It was a complete shock. And it clearly wasn’t her. There were personal demons she was battling.’

The NYC Office of Chief Medical Examiner determined her official cause of death as suicide by hanging this morning.

He went on to reveal that there were no signs Kate had planned to take her life, and said her death had left him and their daughter Bea heartbroken.

Andy also said that the two had been living apart for some time.

‘For the past 10 months we had been living separately, but within a few blocks of each other. Bea was living with both of us and we saw each other or spoke every day,’ said Andy. 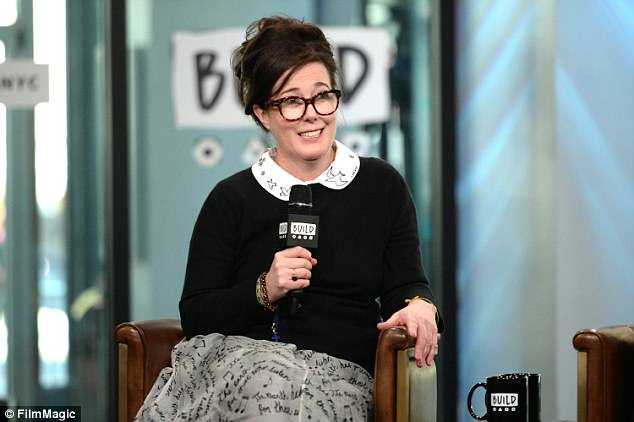 Saffo previously told DailyMail.com that she believed her sister’s fame may have been connected to her mental health issues and ultimately her suicide.

She added that her sister had been planning to kill herself for a long time before she hanged herself on Tuesday.

‘My little sister Katy was a precious, precious little person,’ Saffo told us. ‘Genuine in almost every way.

‘Just dear – but she was surrounded by YES people, for far too long, therefore she did not receive the proper care for what I believed to be (and tried numerous times to get her help for) bipolar disorder… stemming from her immense celebrity.’

Saffo said the 55-year-old never anticipated how successful her brand would become – and how she, with it, would become a household name.

‘She never expected it – nor was she properly prepared for it,’ she told DailyMail.com. 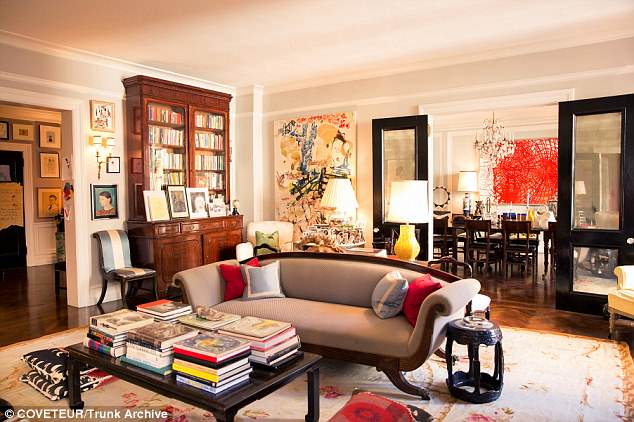 Apartment: The designer left a note telling her daughter it was not her fault before taking her own life by hanging and allegedly told the girl to ‘ask daddy’ reports TMZ (Spade’s apartment above) 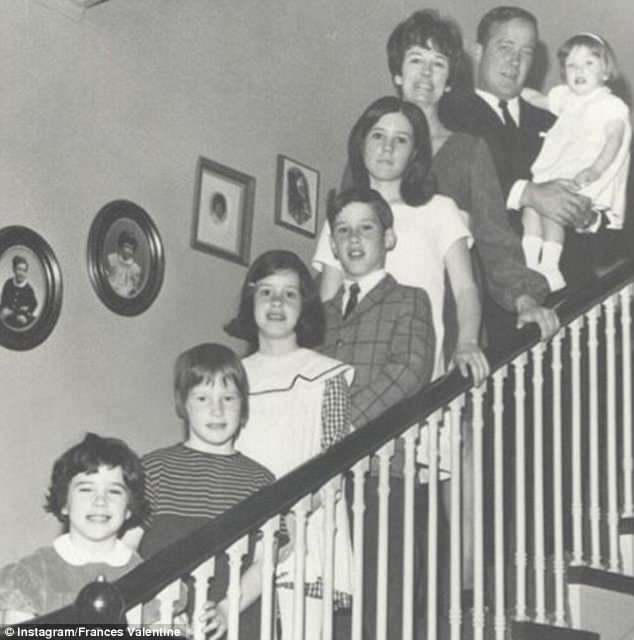 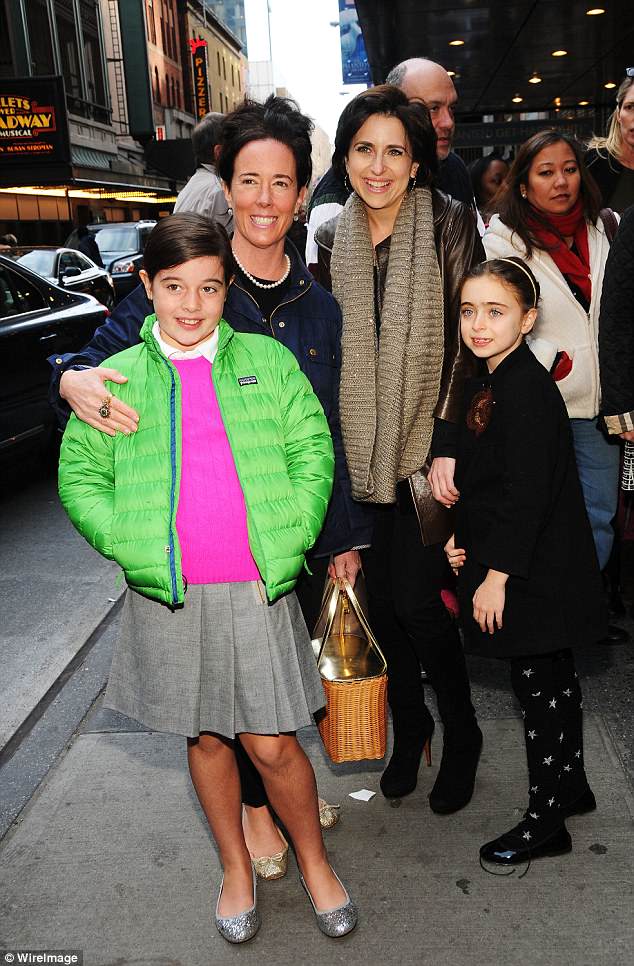 Spade with her daughter Beatrix Spade (left), and Darcy Miller with her daughter (right) Daisy Nussabaum attend the 5,000 performance celebration of ‘Mamma Mia!’ on Broadway at Broadhurst Theatre in November 2013

Saffo told The Kansas City Star she’d noticed worrying signs of mental illness even when Kate was young – but the pressure of running her own brand meant her sister began to crack.

‘She was always a very excitable little girl,’ she said adding that ‘this was not unexpected by me’.

The heartbroken sister, who said she spoke to the newspaper after taking sedatives, said Kate would self-medicate her suspected bipolar disorder with alcohol, because she was too scared to seek professional help in case it damaged the brand.

‘Unfortunately, untreated, it finally took its toll on her,’ she told the DailyMail.com. ‘A very tragic and sad ending to the life of a very colorful and delightful being.’

Saffo said she was aware of her sister’s battle with mental illness, but it wasn’t until comedian Robin Williams killed himself in August 2014, that Saffo began to realize Kate’s obsession with suicide and her unraveling mental health. 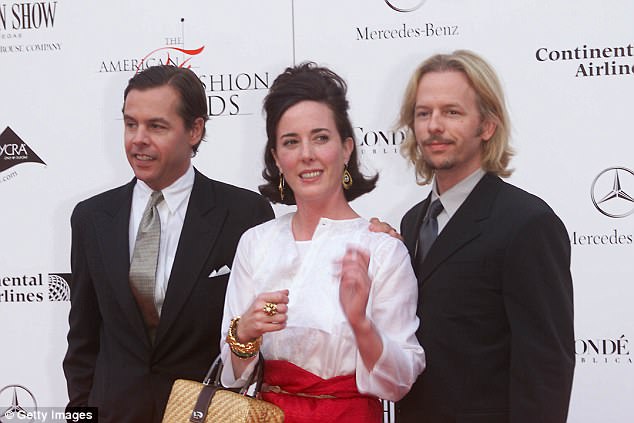 Trio: By 2006, the company was valued at $125 million, and Kate left for good the following year after Neiman sold Kate Spade & Co to Liz Claiborne that same year (Kate with Andy and David Spade in 2001)

WHAT IS BIPOLAR DISORDER?

It is characterised as periods of euphoric highs and depressive lows.

These mood swings can be extreme and have a big impact on a patient’s quality of life.

The rate of bipolar episode cycling varies between sufferers.

Bipolar’s causes may include childhood trauma, stressful life events, genetics or brain chemistry. Treatment may include medication or therapy.

Sufferers can practice self-care by staying physically healthy, maintaining a strong support network, sticking to a daily routine and avoiding known triggers, such as late nights.

The difference between bipolar I and II is that bipolar II sufferers won’t have experienced a full manic episode.

Saffo, 57, describes how they were together at a hotel in Santa Fe when news broke of his death. And while she says they were both shocked and saddened, Kate seemed unable to tear herself away from the footage.

‘She kept watching it and watching it over and over,’ she said. ‘I think the plan was already in motion even as far back as then.’

Increasingly concerned about her mental state, Saffo says that she and Kate’s husband Andy Spade repeatedly urged her to go for treatment, including to the same treatment program where Catherine Zeta-Jones went for her successful bipolar treatment.

But she’d always ‘chickened out’ at the last moment.

‘We’d get sooo close to packing her bags, but — in the end, the ‘image’ of her brand (happy-go-lucky Kate Spade) was more important for her to keep up. She was definitely worried about what people would say if they found out.’

In the end, she says, Kate’s death was heartbreaking but ‘not unexpected’.

‘Sometimes you simply cannot SAVE people from themselves!’ Saffo, of Santa Fe, New Mexico, told The Star, adding that she would miss her ‘kind’, ‘funny’ and ‘dear’ sister and their marathon seven hour phone calls.

Saffo said after numerous attempts to try and help her sister, she ‘finally let go.’

The last time they talked, her sister had urged her to attend her funeral.

‘One of the last things she said to me was, ‘Reta, I know you hate funerals and don’t attend them, but for me would you PLEASE come to MINE, at least. Please!’ I know she perhaps had a plan, but she insisted she did not.’

ANDY SPADE SPEAKS OUT ABOUT THE DEATH OF HIS WIFE KATE

Kate was the most beautiful woman in the world. She was the kindest person I’ve ever known and my best friend for 35 years. My daughter and I are devastated by her loss, and can’t even begin to fathom life without her. We are deeply heartbroken and miss her already.

Kate suffered from depression and anxiety for many years. She was actively seeking help and working closely with her doctors to treat her disease, one that takes far too many lives. We were in touch with her the night before and she sounded happy. There was no indication and no warning that she would do this. It was a complete shock. And it clearly wasn’t her. There were personal demons she was battling.

For the past 10 months we had been living separately, but within a few blocks of each other. Bea was living with both of us and we saw each other or spoke every day. We ate many meals together as a family and continued to vacation together as a family. Our daughter was our priority. We were not legally separated, and never even discussed divorce. We were best friends trying to work through our problems in the best way we knew how. We were together for 35 years. We loved each other very much and simply needed a break.

This is the truth. Anything else that is out there right now is false. She was actively seeking help for depression and anxiety over the last 5 years, seeing a doctor on a regular basis and taking medication for both depression and anxiety. There was no substance or alcohol abuse. There were no business problems. We loved creating our businesses together. We were co-parenting our beautiful daughter. I have yet to see any note left behind and am appalled that a private message to my daughter has been so heartlessly shared with the media.

My main concern is Bea and protecting her privacy as she deals with the unimaginable grief of losing her mother. Kate loved Bea so very much.