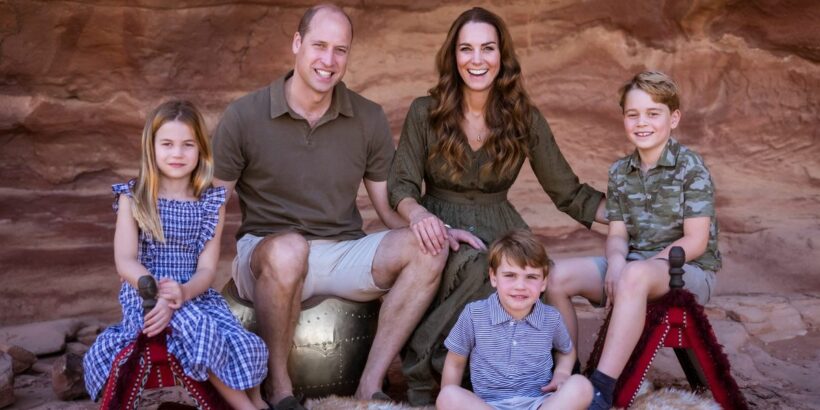 The photo shows the pair, along with their three children – George, Charlotte and Louis – sitting outside on the rocks during a trip to Jordan earlier this year.

They are all smiling broadly at the camera, with Kate and William placing their hands on each other’s legs.

As well as being an adorable family memory, it also proves Prince William kept a promise he made to his wife back in 2018, the Daily Mirror reports.

Their choice of snap is a nod to Kate's family, the Middletons, as it was taken in Jordan, which they called home for three years when Kate’s father Michael worked in the region as a British Airways pilot.

The family loved their time there and have previously shared photos from the period in the 1980s.

In 2018 William visited Jordan as part of a five-day tour of the Middle East, but Kate had to miss the trip as she was on maternity leave having just welcomed Prince Louis.

He said Kate was "very upset" to miss the visit as she was keen to return to the area.

So, during his visit to a spectacular archaeological site at Jerash, which Kate visited during her time in the country, he did something very sweet for her.

While they were living in the country, the family visited the ruins of a first century Roman city and posed for a cute family photo.

It shows Kate with her dad Michael and little sister Pippa sitting on a wall overlooking the incredible site.

But as Kate wasn't there to recreate the special moment herself, the Duke decided to do it for her.

Wearing beige trousers and a blue blazer, he stood and smiled in front of the historic site in the scorching temperatures.

But it wasn't quite good enough for William and he made a promise to come back "with the family for this shot".

And this year it looks like he kept that promise, taking Kate and their children back to the area.

While they didn't release a recreated photo, the Cambridges' Christmas card snap captures the country perfectly.

In a tweet Kensington Palace said: "Delighted to share a new image of the family, which features on this year’s Christmas card."