Berlin: Whichever way the wind blows, a new satellite will be watching it.

The Aeolus satellite will be the first to directly measure wind speeds and directions all over the globe, allowing scientists to improve worldwide weather forecasts.

"This has not been done before from space," said project scientist Anne Grete Straume of the European Space Agency. 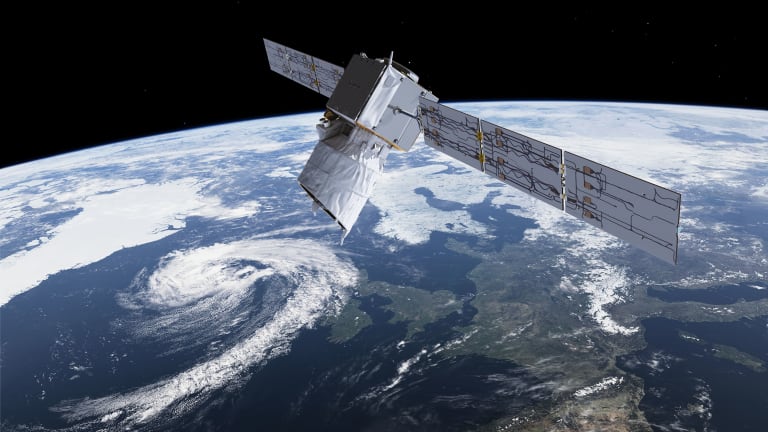 An artists rendering of the Aeolus satellite which will provide timely and accurate profiles of the world’s winds and further information on aerosols and clouds.

Named after the keeper of the winds in Greek mythology, the Aeolus lifted off late on Wednesday, Berlin time, after an earlier planned launch had to be postponed, ironically because of adverse winds.

Data on air movements are currently collected from the ground or, indirectly, by observing waves and clouds from planes or space.

Aeolus is equipped with a so-called lidar – nicknamed Aladin – that fires quick pulses of ultraviolet laser light into the atmosphere and then observes which way they are scattered when they bounce off tiny particles in the air, Straume said.

The process – known as the Doppler effect – is familiar to most people from the way the sound of, say, an ambulance changes whether it's moving toward or away from the listener.

Importantly, Aeolus will close a gap scientists have when it comes to measuring winds at altitudes between 10-30 kilometres.

It will also be able to collect data from areas where ground-based weather stations don't exist, such as in remote regions on land or at sea.

The satellite will orbit Earth every 90 minutes, beaming data to a ground station on Norway's Arctic island of Svalbard from where they will be sent to the European Centre for Medium-Range Weather Forecasts in Reading, England.