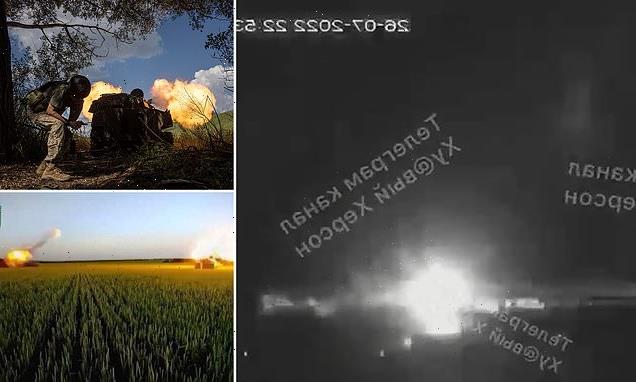 Trapped like rats: Russia’s 49th army in Kherson is ‘highly vulnerable’ and completely cut off from other occupied territory after Ukraine strikes bridge again as counter-offensive gains momentum

Russian troops defending the city of Kherson are ‘highly vulnerable’ to attack after Ukraine destroyed or damaged bridges linking it with the rest of its occupied territory, British military intelligence says.

Putin’s men are now relying on pontoon bridges and ferries to move troops, vehicles and supplies across the Dnipro River after Ukraine blew up Antonovsky Bridge, which is Russia’s main road route into and out of the city.

Two other bridges – the Antonovsky Rail Bridge and Nova Khakokva hydroelectric dam bridge – have also been damaged in recent days, and are not fully operational.

The next-closest bridge spanning the Dnipro – Ukraine’s main river which splits the country down the middle – is at Zaporizhzhia, some 130 miles from Kherson and in the middle of a city that Ukraine controls and has heavily defended.

It means Russia has no easy way of reinforcing or resupplying its men in Kherson in the event that Ukraine attacks – a move which is expected to come soon. 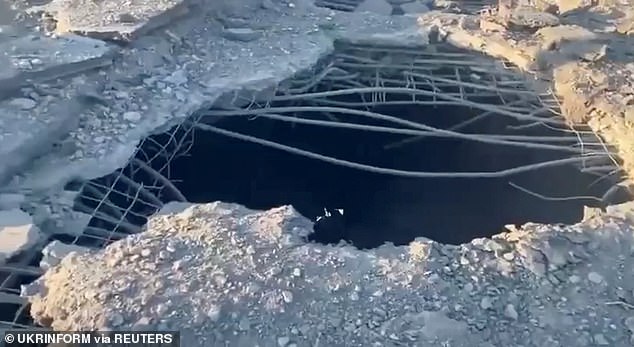 Heavy damage is seen to Antonovsky Bridge, in Kherson, after Ukraine used HIMARS missiles to strike it – making it impassable 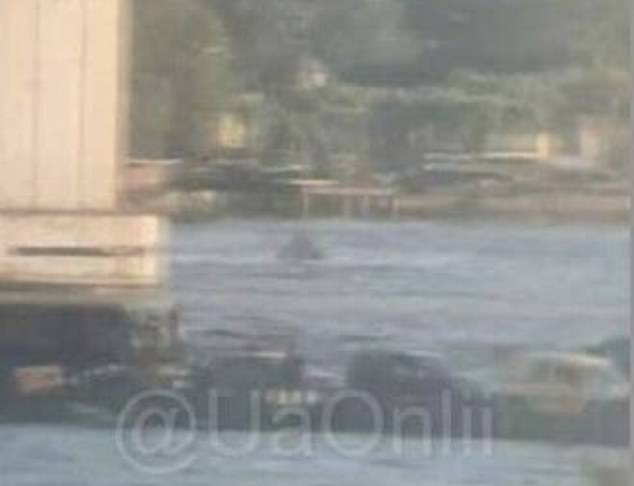 Russian vehicles are seen being transported across the Dnipro using a pontoon bridge, which is far slower than the road bridge and is more vulnerable to attack

The assault would be Ukraine’s first major counter-attack of the war and crucial to proving that it can re-take territory seized by Russia.

The UK Ministry of Defence said: ‘Ukraine has used its new long range artillery to damage at least three of the bridges across the Dnipro River which Russia relies upon to supply the areas under its control.

‘One of these, the 1,000 metre long (3,300ft) Antonovsky Bridge near Kherson city, was damaged last week. Ukraine struck it again on July 27 and it is highly likely that the crossing is now unusable.

‘Russia’s 49th Army is stationed on the west bank of the Dnipro River and now looks highly vulnerable.

‘Similarly, Kherson city, the most politically significant population centre occupied by Russia, is now virtually cut off from the other occupied territories.

‘Its loss would severely undermine Russia’s attempts to paint the occupation as a success.’

Ukraine is also thought to have damaged or destroyed multiple bridges spanning the Inhulets River which flows north out of Kherson towards the city of Kryvyi Rih.

That means the Kherson region has been split in two: With the city on one side and an open and difficult-to-defend area of countryside to the east.

Kyiv’s men are now pushing south from Kryvyi Rih into that area of countryside, with British intel suggesting they have established a toe-hold spanning the Inhulets.

Russian troops in the area now face the unenviable task of having to hold the countryside with no obvious route of retreat if they fail.

Should Ukraine capture the area, it would leave Kherson surrounded on three sides and with the hard-to-cross river at its back.

Ukraine’s Defence Ministry said on Twitter the strikes on bridges over the Dnipro created an ‘impossible dilemma’ for Russia: ‘retreat or be annihilated by the Ukrainian army’.

Kirill Stremousov, the deputy head of the Russian-installed regional administration in Kherson, confirmed the bridge had been hit overnight and traffic had been halted.

But he sought to downplay the damage, insisting that the attack would not affect the outcome of the hostilities ‘in any way’.

Ukrainian forces in recent weeks have been clawing back territory in the Kherson region, which fell to Russian forces easily and early after their invasion launched on February 24.

Their counter-offensive, supported by Western-supplied long-range artillery, has seen its forces push closer to Kherson city, which had a pre-war population of under 300,000 people.

Russian forces ‘should leave Kherson while it is still possible. There may not be a third warning,’ Ukrainian presidential advisor Mykhaylo Podolyak said on Twitter after the attack.

The stakes for the Kherson assault are high. Russia will be desperate to hold the city – the only regional capital it has captured since the start of the war, and its sole toe-hold on the western bank of the Dnipro.

Ukraine wants to prove that it can mount a successful large-scale counter-attack against Russia, which is a much-more complicated operation than defence.

Doing so would prove – at least in theory – that Kyiv’s ultimate war aim of re-taking all territory seized by Russia since the start of the war is possible.

It would provide a much-needed morale boost and drag Western attention back to the war, likely followed by additional military aid and financial support.

Kyiv will be keenly aware that Russia is throttling gas supplies to its European allies, and that pressure will only increase as winter draws closer.

Without a significant victory to cheer, President Zelensky and his government may have a hard time persuading allies to continue their support.

Elsewhere, Ukraine said it had restarted operations at its blockaded Black Sea ports as it moved closer to resuming grain exports with the opening of a coordination centre to oversee a UN-backed deal. 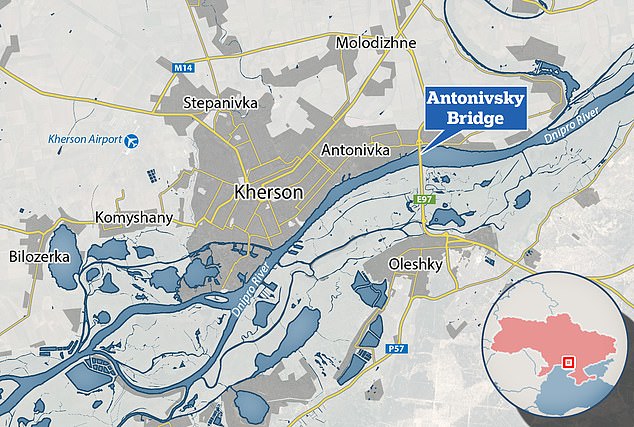 Antonovsky Bridge is the main road route connecting Kherson – on the west bank of the Dnipro River – from the east bank, where Russia’s main forces are based 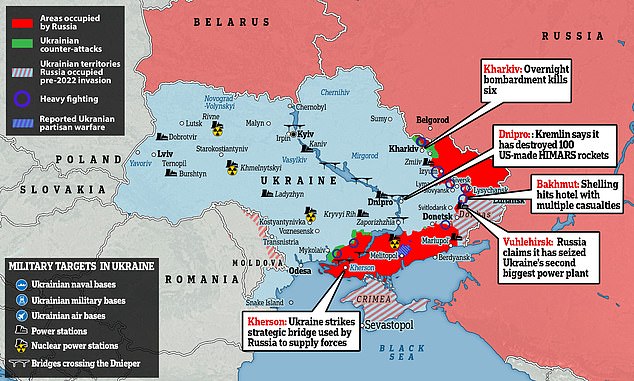 Ukraine and Russia last week agreed a plan with the help of Turkey and the United Nations to allow grain stranded by Moscow’s naval blockade to be exported from three ports.

Kyiv has said it hopes to begin sending out the first of millions of tonnes of grain this week despite a missile strike by Russia over the weekend on the port in Odessa.

Ukraine’s navy said ‘work has resumed’ at the export hubs to prepare for ships to be escorted through the mine-infested waters to reach world markets.

As part of the deal, a coordination centre involving Ukrainian and Russian representatives opened in Istanbul to monitor the safe passage for shipping along established routes and oversee inspections for banned weapons.

The blockage of deliveries from two of the world’s biggest grain exporters has contributed to a spike in prices that has made food imports prohibitively expensive for some of the world’s poorest countries.

Deepening an energy crisis in Europe sparked by the war, Germany’s energy regulator said flow of Russian gas via the key Nord Stream pipeline had dropped to 20 percent of capacity on Wednesday from 40 percent.

Kremlin spokesman Dmitry Peskov blamed EU sanctions for the limited supply, but Berlin has dismissed the explanation and government spokeswoman Christiane Hoffmann called the reductions a ‘power play’ by Moscow.

The European Union has been bracing for energy cutbacks and on Tuesday agreed a plan to reduce gas consumption by 15 percent this winter to break its dependence on Russia.

‘Our export not only allows us to generate foreign currency revenues, but also help our partners withstand the energy pressure from Russia,’ Zelensky said in his daily address to the nation Wednesday evening.