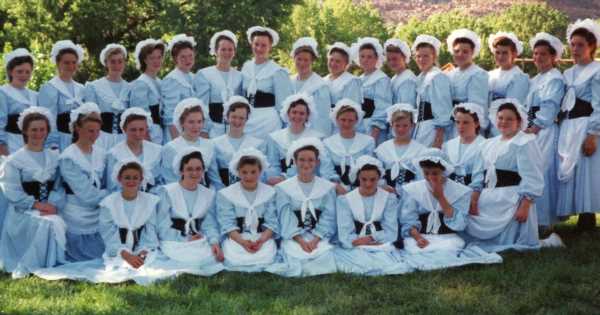 Horrifying tales of toddlers being snatched and groomed for underage marriage have been shared in a chilling Netflix documentary.

In the third episode of chilling series Keep Sweet: Pray and Obey, viewers are told how mothers woke up to find children gone from their beds.

Handpicked by the leader of the Fundamentalist Church of Jesus Christ of Latter-Day Saints (FLDS), the traumatised youngsters were hidden away on a secluded ranch in Texas known as 'Zion'.

There they were force-fed the oppressive teachings of self-professed prophet Warren Jeffs before being married off – some as young as 12 – to older men within the cult. The brainwashed community of the FLDS were first taught Zion was the afterlife for the "righteous and the pure".

But Jeffs then twisted the 'prophecy' – stating it was in fact on Earth, and in Texas, and began removing the children from their families.

One mum Alicia Rohbock recalled the day her children Rachel and Ruleecia, aged just two and three, were shipped off to the ranch without her.

"The day they all went to Zion, I couldn't say bye," she said.

"I tried to. I hugged them, but I couldn't look in their eyes. I couldn't stand to see the pain.

"Ruleecia went screaming, and it was just so hard to give her up."

Alicia, who eventually managed to flee the sick polygamous cult, went on: "It was one of the hardest things I've ever done, but I wanted so much to please the prophet and God, so I was going to do it.

"And it took everything I had to hand her over."

Another member of the society Charlene said she witnessed other mothers waking in the morning to find their children gone.

"And going and questioning the husband, 'Where is my child? Did they get out and sleepwalk? Had they been abducted from the home?'" she said.

"And have the father of the home say, 'Never you mind. They're in good hands.'" During his leadership, Jeffs conducted 67 arranged marriages. Of his own 78 wives, 24 were underage.

But he knew the revolting practices had to be concealed.

So he moved young members from Salt Lake City – the original base of the cult – to the secluded Texas ranch where he also built an enormous temple.

Sam Brower, a private investigator who worked on the Jeffs case, said the ranch became a "grooming ground" for underage brides and they were raised like "calves in the stall."

"That way you're gonna have this pool of pure clean girls that are gonna be going to these old leches," he said.

Keep Sweet: Pray and Obey is currently showing on Netflix.