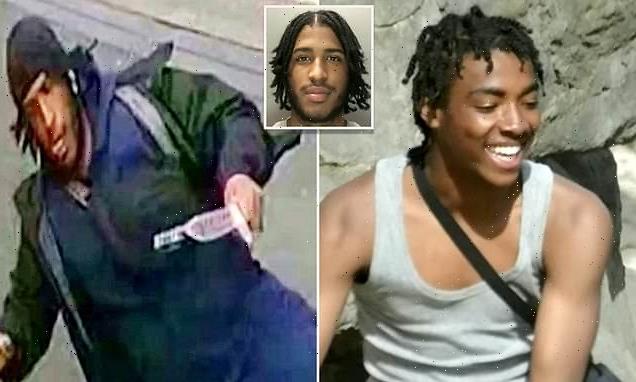 Teenage killer, 18, who chased his victim down the street with a huge ‘Rambo knife’ before brutally hacking him to death in attack caught on CCTV is jailed for life

A teenage killer caught on chilling CCTV chasing a 17-year-old boy with a ‘Rambo knife’ before hacking him to death in the street has been jailed for life.

Cam-Ron Dunn, 18, stabbed Derlano Samuels twice with the blade before chasing him into a shop where he had tried to take refuge.

A court heard that Dunn then repeatedly knifed the teenager multiple times before making his getaway on a bicycle — leaving his victim in a pool of blood.

Derlano died from a stab wound to his chest following the attack in Waterloo Road, Cape Hill, Smethwick, West Midlands, on May 1 last year.

A post mortem also revealed he suffered multiple stab wounds to his body, including one which left the knife tip lodged in his skull.

Today, Dunn was jailed for life, to serve a minimum term of 20 years. 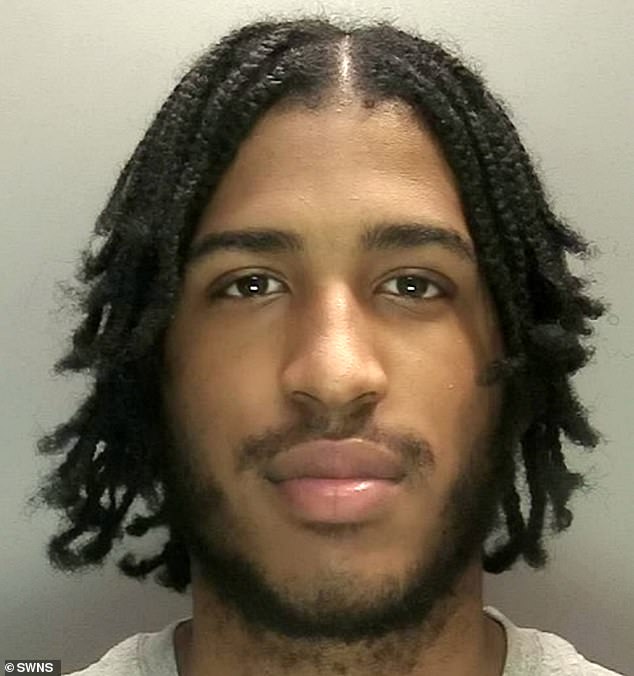 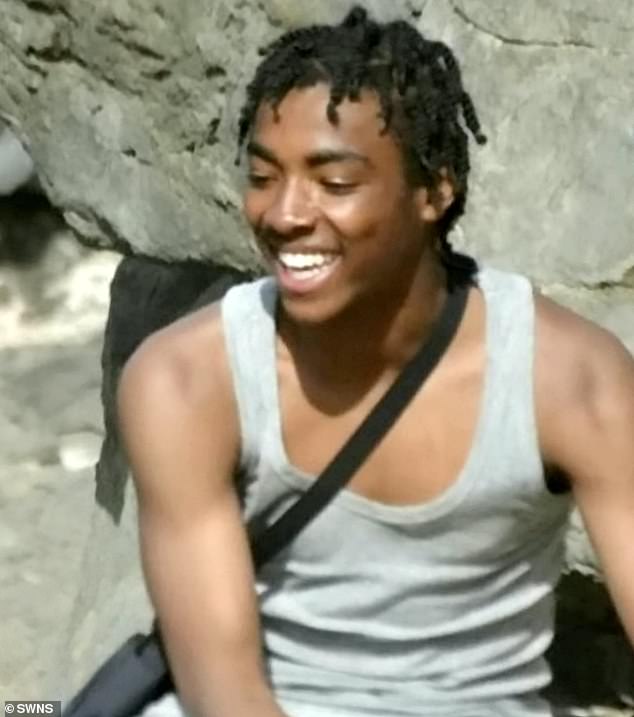 Pictured: Derlano’s family described him as a happy,  thoughtful and kind-hearted person

Derlano’s family issued a statement after the case to speak of their heartbreak and called for an end to knife crime in Britain.

They said: ‘Derlano was a happy, positive, thoughtful and kind-hearted person. His life was taken from him before his 18th birthday in a senseless act at the hands of another.

‘He will be forever missed by his family and those who knew and loved him.

‘The youth of today think carrying knives will protect them, but in fact you are putting your life in the hands of the law.

‘Knife crime is a pandemic in the UK, the impact ripples through families and communities and cannot be underestimated.’ 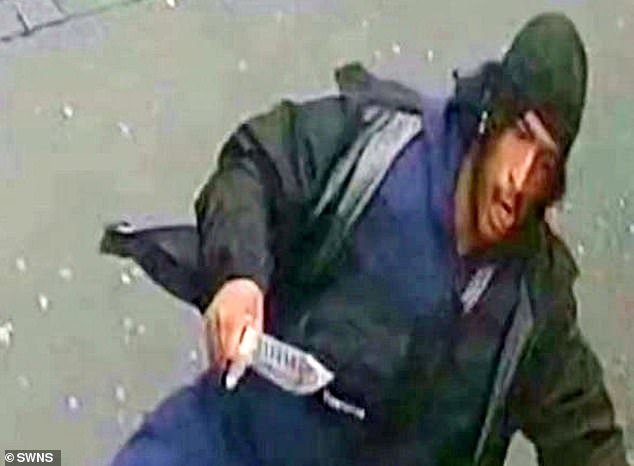 Cam-Ron Dunn (pictured) has been jailed for life after being found guilty of murder. Pictured,  CCTV captured the moment he chased down Derlano Samuels and stabbed him to death 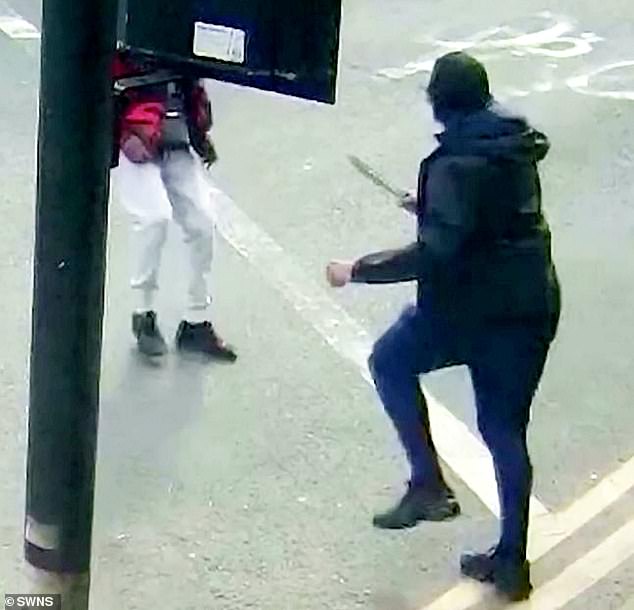 West Midlands Police previously released footage of the moment Dunn lunged at Derlano before chasing him to his death.

CCTV shows Derlano run away after being stabbed twice before seeking refuge in a Polish supermarket.

Dunn is seen racing towards him before launching the fatal blows and escaping on foot while appearing to check his hands for blood.

He then runs into another shop where he hid the knife in his trousers and fixed his hair before calmly retrieving his bike and riding home.

Moments after the brutal attack, Derlano managed to scramble into the Ford which had driven away earlier, following an altercation with Dunn.

Minutes later the car was found crashed a mile away in Heath Street, Winson Green, Birmingham.

Police and paramedics dashed to the scene and found Derlano who was rushed to hospital but died a short time later.

After examining the CCTV retrieved from the shop, a police officer recognised the killer as Dunn.

He was arrested at his home at 1.20am on May 2 and officers found a freshly washed tracksuit Dunn had worn on the day of the murder.

Officers also found a stab proof vest and a knife sheath in the downstairs toilet along with two machetes hidden in a barbecue and one under the sofa in the living room.

Detective Inspector Hannah Whitehouse said: ‘The brutality of this attack was just horrifying and as a result, yet another family has been left grieving for a much-loved teenager.

‘Derlano was stabbed in the street and then clearly tried to flee from his attacker. 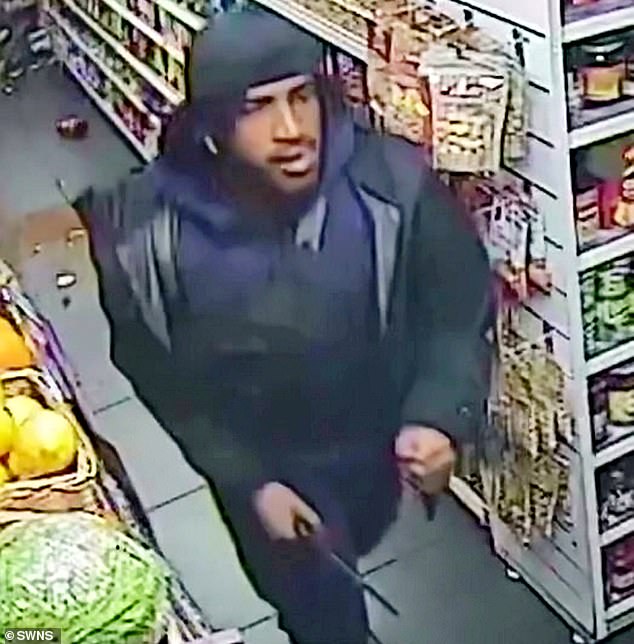 ‘He was pursued by Dunn and subjected to a further vicious knife attack when he was cornered.

‘What caused this horrifying violence to be unleashed isn’t clear but it has resulted in another family losing a loved one, and our thoughts remain with them.

‘Our thoughts remain with them and we hope this jail sentence can bring them some comfort.

‘But this tragic killing is again a reminder of the dangers of carrying knives and the awful impact that doing so can have.

‘Two families have had their futures re-written —- one now left forever without a oved one, and a second facing the reality of their teenager spending years behind bars.’