Career criminal who has been joyriding since age 11 and killed a pedestrian at 15 is jailed for 18 months after leading police on heartstopping 93mph police chase along city streets, footpaths and even through a field in stolen Audi A3

A career car thief who began joyriding at 11 and killed a pedestrian aged 15 was back behind bars today over a 93 miles per hour police chase which a judge said ‘defied belief.’

Asa Hunter, 24, ignored a motoring ban and drove a stolen Audi A3 fitted with false plates along pavements and pedestrian footpaths in inner city Manchester in the hope of shaking off a police patrol.

Officers were forced to deploy a stinger device to stop the car after it hit a wheelie bin on a pavement and drove along the wrong side of the road, over pot holes and speed humps at 70mph.

They then had to scramble the force helicopter to track down Hunter after he ran off from the vehicle. 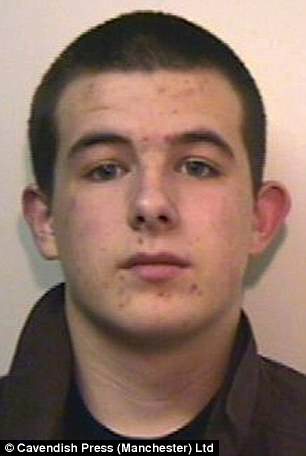 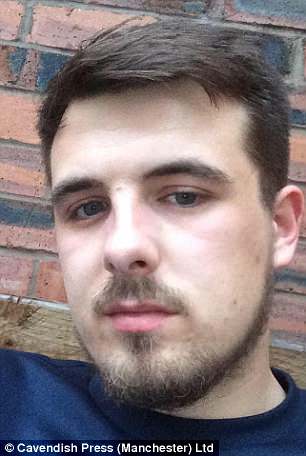 Manchester Crown Court heard the shameless ex-plasterer had been in and out of the courts for almost 14 years of his life for joyriding offences and blamed his behaviour on a ‘bad upbringing’ from his jailbird father also called Asa and living on a gritty council estate.

By the age of 16 he had clocked up 49 offences including car theft, robbery, criminal damage and ASBO related crimes before being locked away in 2009 for public protection after he mowed down and killed a 61-year old man in a 60mph hit and run crash during another police pursuit.

It is thought he has never passed a driving test.

Dramatic CCTV of last March’s police pursuit emerged as Hunter, from Gorton, Manchester was locked away for another 18 months after he admitted dangerous driving, driving while banned and having no licence.

Judge David Stockdale QC told him: ‘I have seen that video and the driving of that car was appalling. You were driving at high speeds estimated at over 80mph in a residential area. It was a prolonged pursuit and you were well aware the police were following you. 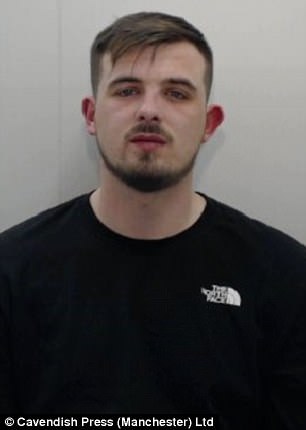 ‘I can only describe the standard of driving as terrifying. As you overtook vehicles there was oncoming traffic, and at one point you onto the pavement along terraced house where front doors go out onto the street. Even after your tyres had been deflated you carried on driving. It was an appalling piece of driving and particularly dangerous.

‘All of this is aggravated by your previous convictions. How you thought fit to drive a stolen vehicle in that way on that night with your record defies belief.’

In his teenage years Hunter had spent several periods in youth detention but he became a killer in April 2009 just hours after he was freed from Hindley Young Offenders Institution, near Wigan, following a three-month sentence for failing to comply with previous sentences.

A Vauxhall Vectra had been stolen from a house and Hunter was seen driving in Gorton with three passengers including two girls and was showing off by doing handbrake turns. 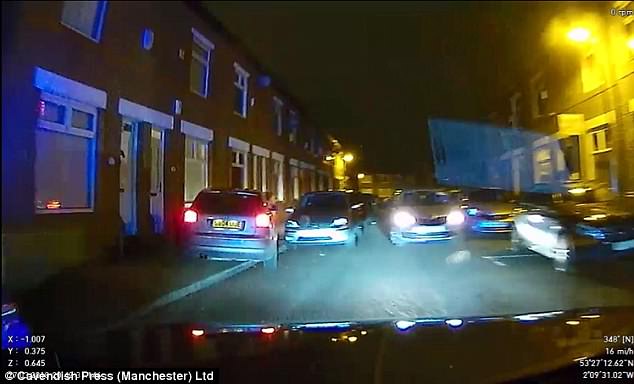 But he then spotted police and sped off through the streets with his passengers pleading with him to slow down. He mowed down Thomas Drane who was crossing the road and propelled his body 37 metres by the force of the impact.

Hunter drove on with a smashed windscreen then dumped the car before ringing his mother saying: ‘It was an accident mum, I didn’t mean to do it. I’ve got a grand in my pocket, I’m halfway to Scotland. I’m off.’ One of the witnesses later told police: ‘Asa hadn’t seemed bothered about the accident.’

Hunter was later arrested but was bailed and just three weeks later he drove another car into a group of young people following a minor row, injuring two boys.

At the time he was ordered to be named and shamed and branded a ‘dangerous offender’ by the trial judge after he pleaded guilty to causing death by dangerous driving and causing grievous bodily harm but he was only required to serve three years of an indeterminate sentence before he would be considered for parole. It is not known when he was released.

Last December, Hunter moaned on Facebook of gossip about him being ‘wanted by police and on the run’ saying: ‘I really don’t understand how my sh*t is so exciting that people come out of there little hole to make sh*t up (sic). I’m not going back to jail.’

But the police pursuit occurred just three months later and just two weeks after the Audi was stolen in a house burglary. Prosecuting Miss Claire Brocklebank said: ‘This vehicle was seen in Longsight travelling around 80mph when the limit in that area is 30 to 40mph. An unmarked police car drove after the vehicle and the vehicle continued to travel at speed. 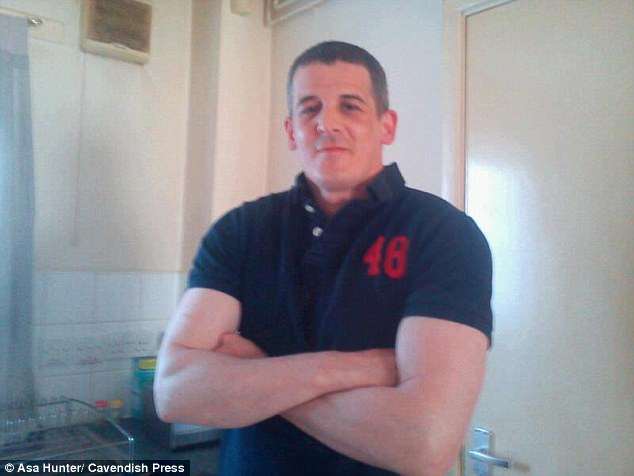 ‘It continued whilst being pursued and over took other motorists to avoid being hit. Normal vehicles had to stop or break suddenly as the defendant’s vehicle continues in front of them. The police cars speed metre was up to at least 70mph and the car was speeding ahead of that.

‘The highest reading was 80 or 90mph in a 30mph zone. At one point the vehicle swerves onto the pavement and hits a bin. Anyone who had stepped outside of their property at that time would have come into contact with that vehicle. The defendant was also seen going on the wrong side of the road on many occasions.

‘A stinger was used by the police to deflate the car tyres and the vehicle came to a stop and the driver got out and ran away. By this point a police helicopter had been called and the defendant was detained. He was arrested and gave a no comment interview.’

The court heard Hunter currently had ‘multiple driving convictions’ but the number was not specified. His lawyer Michael McKeown said in mitigation: ‘The defendant had a very bad upbringing. His father is well-known to the courts and he ended up becoming involved with criminal associates which led him to commit the death by dangerous driving offence. 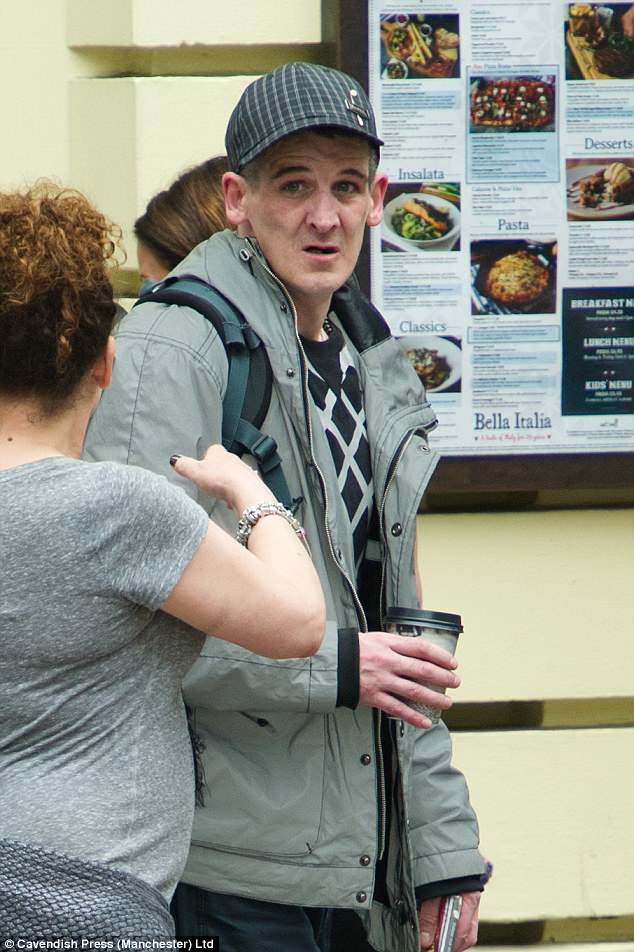 Hunter’s father, now 42, was jailed for ten months in 2016 for slashing a college student’s face with a potato peeler

‘In June last year he tried to make amends for six months but he broke his elbow and was unable to continue working as a plasterer and ended up falling back into the wrong crowd and wrong associates.

‘The defendant says he is very upset with himself. His partner has just had a child and he wanted to be there for that. He says that where he lives, if things go wrong you end up falling into the wrong type of company.’

Hunter’s father, now 42, was jailed for ten months in 2016 for slashing a college student’s face with a potato peeler after being told off for swearing at two young girls during a bus journey.

Last December he posted apparently self penned poetry on Facebook about his spell in Strangeways jail saying inmates had a ready of supply of Budweiser beer and home-brewed alcohol.

He wrote: ‘Where men are living in a daze with Hooch and Bud – its all good. The screws think they’re in charge but that sh*t is just a mirage – their rules are just for show.’