Killing Eve is back, but Villanelle hasn’t changed one bit and the sexual tension is mounting: Cold-blooded assassin carries on her brutal killing spree and calls the MI6 agent who stabbed her ‘girlfriend’ as the cat-and-mouse thriller returns to TV

After captivating audiences across the world with its mixture of thrills, whimsy, and plenty of murder, Killing Eve is back with everyone’s favorite cat and mouse game.

And the chase shows no signs of slowing down after MI6 officer Eve Polastri (Sandra Oh) stabbed Russian assassin Villanelle (Jodie Comer) at the very moment it seemed their long-burning chemistry would finally come to fruition.

The premiere of the second season starts 30 seconds from where we left off, with a bleeding Villanelle running through the streets of Paris while Eve desperately tries to come to terms with what she’s done. 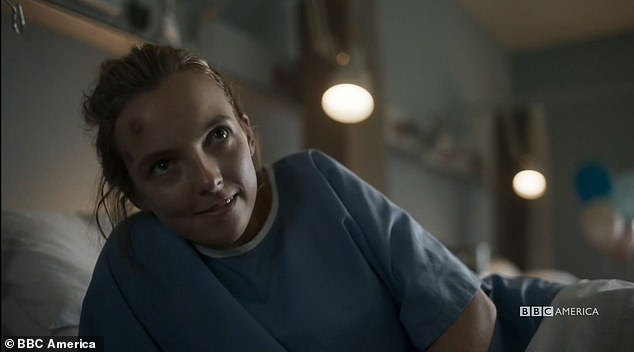 After captivating audiences across the world with its mixture of thrills, whimsy, and plenty of murder, Killing Eve is back with everyone’s favorite cat and mouse game 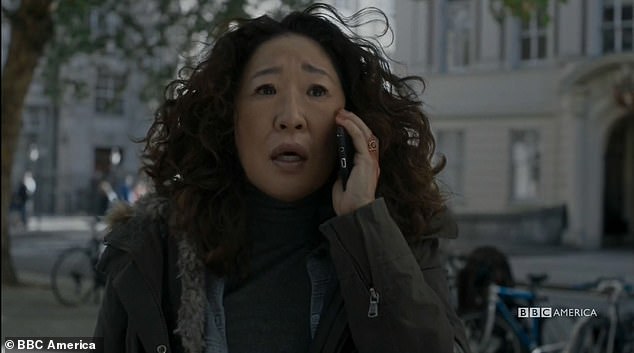 We had last seen Eve and Villanelle in bed together, the assassin promising that she wouldn’t kill her – only for Eve to stab her instead.

‘I really liked you,’ Villanelle says, in complete shock at the betrayal. And just like that, Eve was suddenly trying to save her.

But Villanelle manages to escape, and in Sunday’s season premiere it was Eve trying to run after her.

Eve runs down the stairs, still clutching the knife she used to stab Villanelle, when three people dressed as paramedics suddenly enter the building.

They kill the old woman who walked into Villanelle’s apartment following the stabbing – the only other witness – as Eve hides.

The fake officers – who we later learn are with The Twelve – take away the woman’s body, speaking to someone on the phone as Villanelle tries to hide.

‘She’s not here,’ they say, clearly talking about the assassin. ‘There’s blood. She won’t get very far, we’ll find her.’ 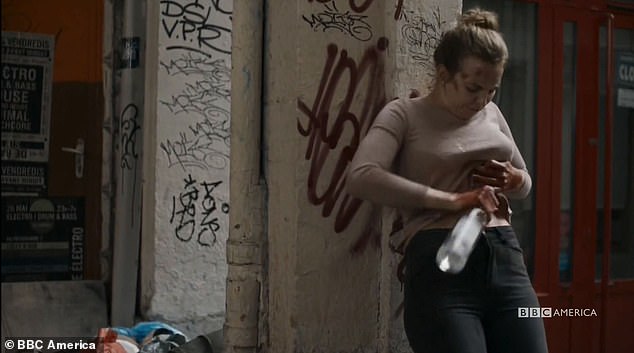 We see Villanelle running through the streets of Paris, splashing her wound with a homeless man’s vodka 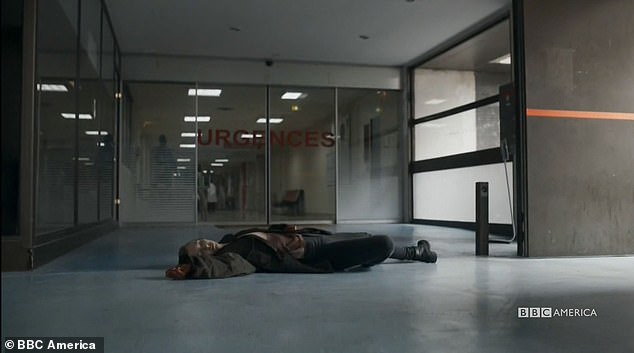 She then throws herself in front of a cab to get herself to a hospital, the driver dumping her body in front of the ER

‘Carolyn, I think I might have killed her,’ Eve says after the line has already gone dead, but still catching the attention of a man proposing to a woman right in front of her.

As Eve heads to the train station, Villanelle is staggering through the streets. She splashes a homeless man’s vodka on her wound and throws herself in front of a cab to get herself to the hospital.

She recovers in bed next to a car crash victim named Gabriel, and tells him that she needs to go to London to visit her girlfriend.

‘A woman stabbed me,’ she replies.

‘I know, it surprised me too,’ she says with that sinister smile. ‘But she did it to show me how much she cared about me.’

‘No, it isn’t,’ Villanelle tells him, her smile wider now. ‘Sometimes when you love someone, you will do crazy things.’ 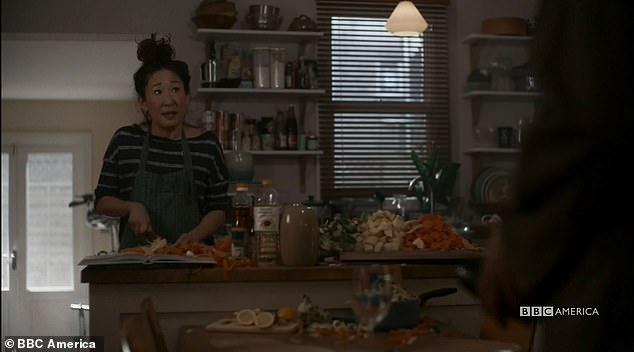 As Villanelle plans her escape route, Eve’s mental state unravels rapidly. At one point she manically chops up a mountain of vegetables for her husband 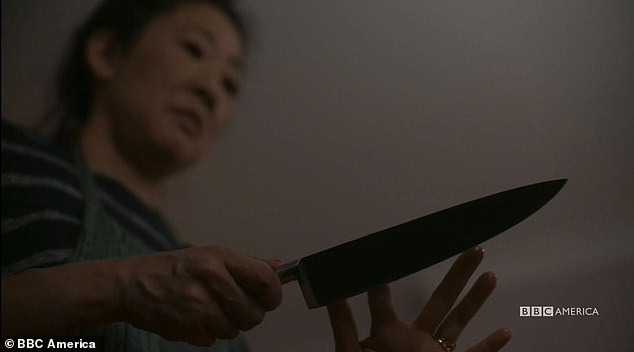 She curiously runs her fingers across the blade, the PTSD from her encounter with Villanelle all the more apparent 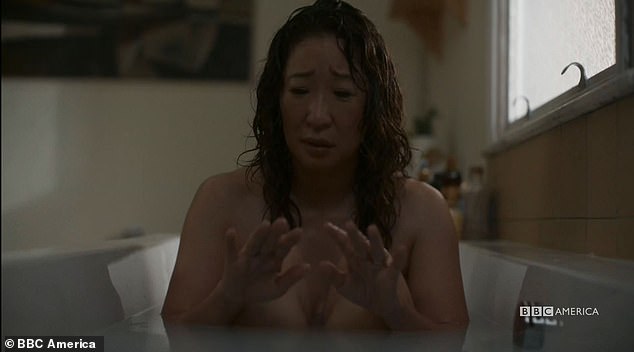 At one point Eve breaks down in the bath as she gazes at her fingernails, still stained with Villanelle’s blood

As Villanelle plans her escape route, Eve’s mental state unravels rapidly. She repeatedly stabs herself with a pen, drawing blood. She manically chops up vegetables to make her husband dinner, curiously running her finger across the knife. She sits in a bath for an hour and looks at Villanelle’s blood, still staining her fingernails.

Villanelle convinces Gabriel to steal her a nurse’s badge so she can walk through the hospital unnoticed, stocking up on drugs for her escape. She lies and tells a woman her husband’s condition is improving, lifting her wallet as the woman cries with relief and calls her an angel.

When she discovers the wallet only has a few stray coins, Villanelle asks Gabriel if he has any money, or if his parents have any money. He tells her they both died in the car accident.

‘That’s not helpful to me Gabriel’, she tells him in that classic cold-blooded Villanelle style, before suddenly collapsing.

Meanwhile, Eve is back in London and meets Carolyn at the park. She lies about Paris, saying she found Villanelle’s apartment but that the assassin was already gone. 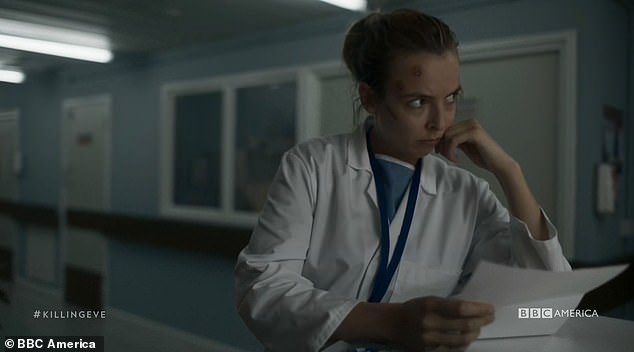 Villanelle convinces Gabriel to steal her a nurse’s badge so she can walk through the hospital unnoticed, stocking up on drugs for her escape 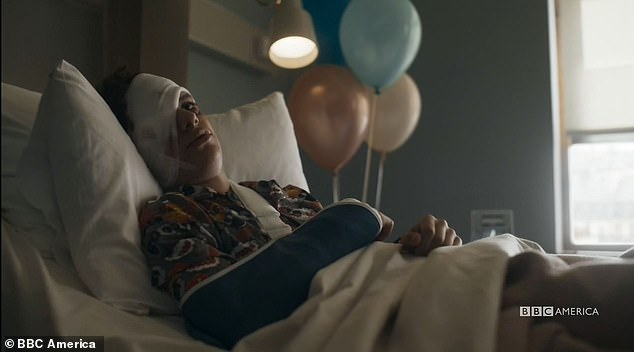 She tells Gabriel that she must go to London to visit her girlfriend, telling him she knows Eve better than anyone

‘Any ideas where she might have gone, any feelings?’ Carolyn replies.

‘No, no feelings,’ Eve replies, clearly trying to convince herself of something else.

Carolyn rehires Eve and they head to a morgue, where they scarf down burgers next to the dead body of tech mogul Alistair Peel, setting up a new mystery for the second season as it’s revealed he was likely one of Villanelle’s victims.

Meanwhile, Villanelle is preparing to leave the hospital – dressed in Gabriel’s superhero pajamas – as he looks on.

‘What if she stabs you again?’ he asks. 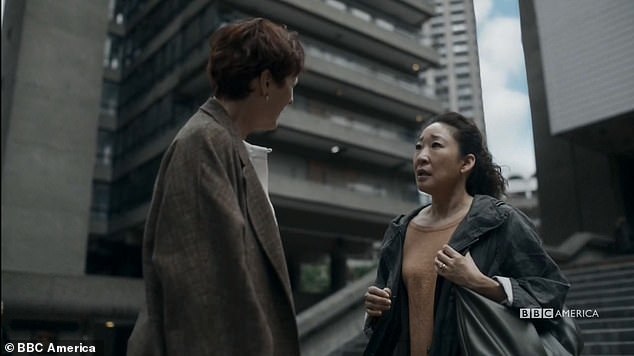 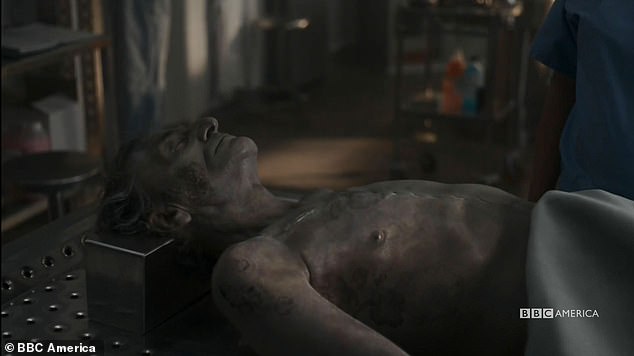 They head to a morgue to see the dead body of tech mogul Alistair Peel, setting up a new mystery for the second season as its revealed he was likely one of Villanelle’s victims

‘I know her better now,’ she says. ‘Better than anyone, better than she knows herself.’

‘Never trust people in their looks Gabriel. You can see scary people a mile away, it’s the good people you have to worry about.’

Gabriel then begins to cry, telling Villanelle he doesn’t want to go on with his mangled face. That he just wants to be ‘the same as everyone else’.

‘Normal is boring,’ Villanelle tells him. ‘I’m not normal, you know.’ 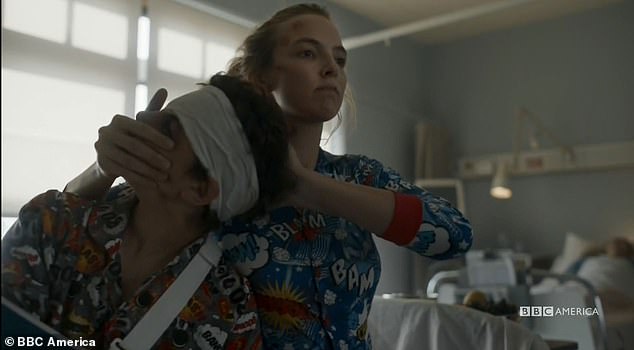 As Gabriel tells Eve that he wished he had died in the car accident with his parents, she comforts him and then breaks his neck 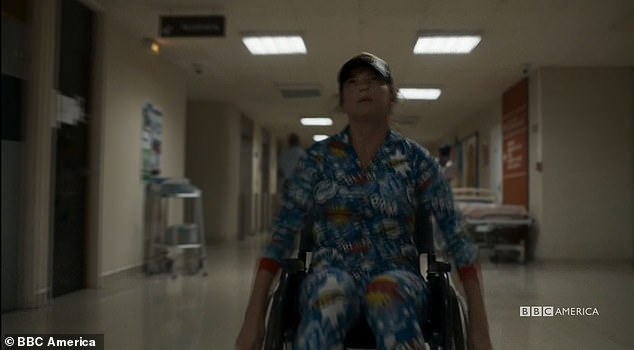 She escapes the hospital in Gabriel’s superhero pajamas, planning her next move to London

‘But you look normal,’ he says.

‘I wish I died in the car like everyone else,’ Gabriel tells her. ‘Would you want to spend your whole life like this?’

Villanelle sits down next to Gabriel and gives him a hug, tenderly touching his hair. Then, with a simple twist, she breaks his neck. 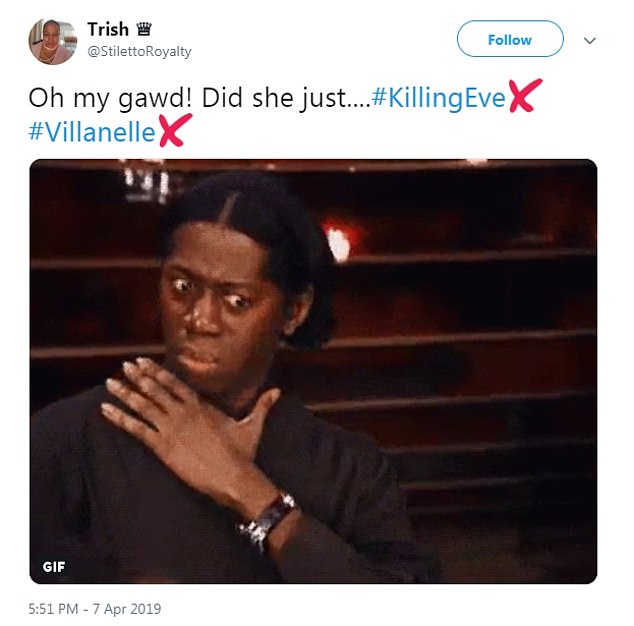 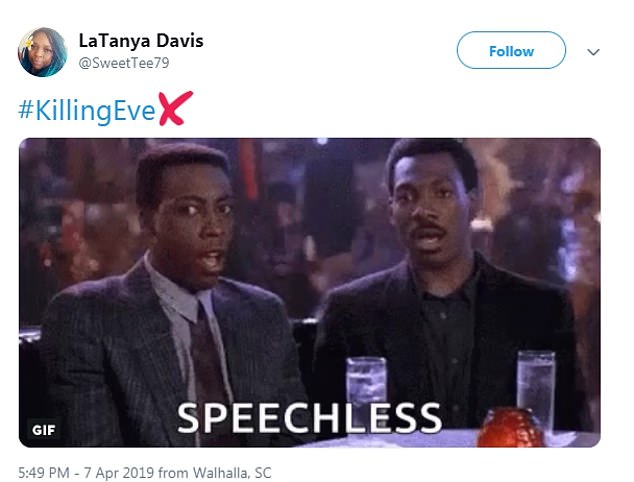 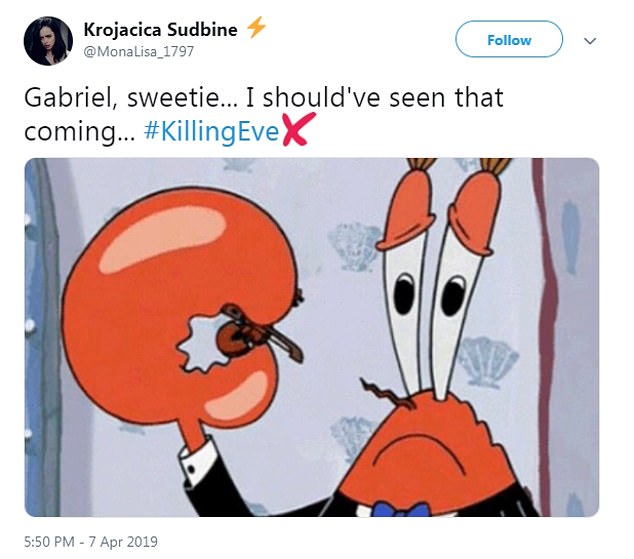 Meanwhile, Carolyn makes it clear to Eve that there’s no going back. The chase is one that Eve doesn’t want to end, even if she won’t admit it.

‘Come on Eve, there’s no need to pretend,’ she tells her during a confrontation in the morgue. ‘If she’s alive, you need to find her. Before she finds you – and she will.’

The episode ends with Villanelle finding her ride back to London, secretly stashed in the trunk of a British family’s car.

Smiling at the possibility of what’s to come. 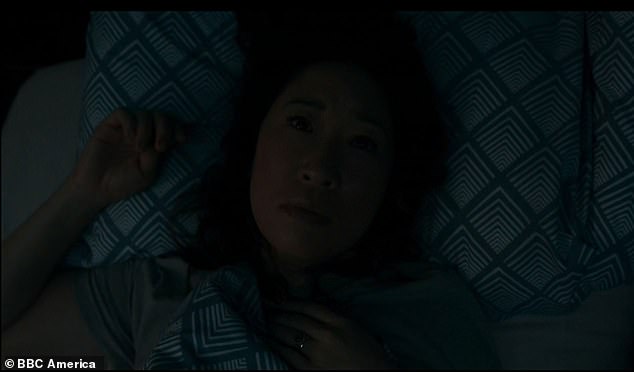 Carolyn makes it clear to Eve that there’s no going back. The chase is one that Eve doesn’t even want to end 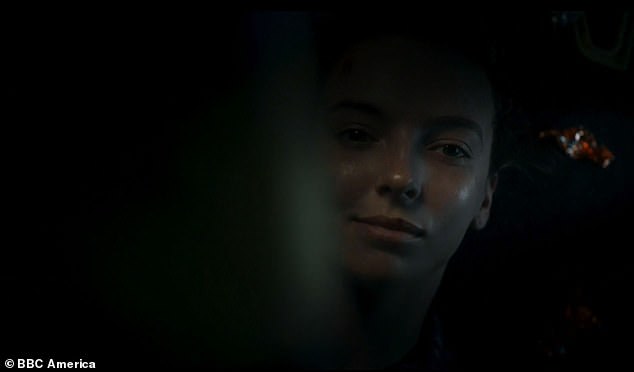 The episode ends with Villanelle finding her ride back to London, secretly stashed in the trunk of a British family’s car. Smiling at the possibility of what’s to come