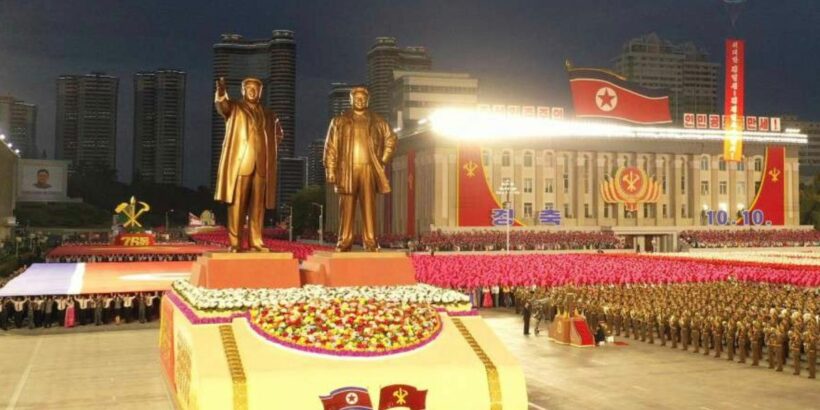 Ordinary North Koreans are pushed into brutal training programmes for their annual Mass Games used to demonstrate the sheer power of Kim Jong-un and his state.

Residents try to focus on their everyday lives but are also obligated to the state to participate in parades, commemorations, demonstrations, mass games, and other choreographed events.

By participating, it can increase the level of social standing an individual has but can take months to prepare and go through the training.

Military parades in the centre of Pyongyang are usually a huge spectacle and the event can be used to show off new missiles and weaponry.

The parade varies each year when it takes place but features Korean People's Army and other North Korean military men and women.

Uniformed participants are under extreme pressure to make sure things go smoothly on parade day.

There are extra vehicles on standby to replace equipment if something goes wrong.

Training for this event starts with general repetitions being taught and takes place at a Mirim Parade Training Grounds.

The training is a gruelling experience which takes place after working hours and at times replaces the working day completely, with people sleeping in the streets during the intense build-up.

Following the missiles and military equipment, civilians can march behind or can follow on parade floats.

On the day of the parade, it takes place at Kim II Sung Square and the flower pixel patterns that happen in the middle of the area need a high level of coordination and synchronicity between tens of thousands of people.

Everyone has a set of red, pink or yellow plastic flowers and needs to know which flower to raise at which time and in perfect unison with everyone else to create a wave-like effect.

To show where everyone has to stand the square is covered in chessboard-like markings.

The most time-consuming preparations are those for the Mass Games, known as the Arirang Mass Games from 2002 to 2013.

They have taken place every year since and usually between August and October, with the show on four times a week.

Up to 100,000 performers take part in Rungardo May Day Stadium, said to be the biggest in the world – with displays of synchronised gymnastics and dance part of the games.

The event re-emerged under a new name in 2018 and took a noticeable toll on the people of Pyongyang.

Adults and children were seen across the city rehearsing for the games every day for months, every open space, park, parking lot, and schoolyard were filled for hours.

In 2018 before the mass games training went on so late into the night, people were seen sleeping on the streets.

After participating in one game, the second or third time around people only need a small reminder of what they need to do before the event.