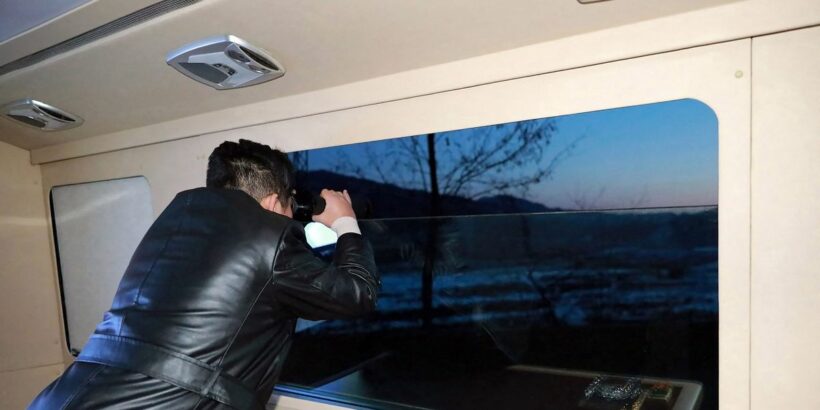 Kim Jong-un has demanded more 'military muscle' after he oversaw a ballistic missile smash a target 600 miles away.

North Korea says their third hypersonic missile test this month was successful after it managed to hit the target hundreds of miles in the distance.

According to state media, the missile was fired on Tuesday and successfully hit its target in the sea some 1,000km (621 miles) away.

This marks the Asian country’s third reported test of a hypersonic missile in less than a week, after the first one took place last Wednesday and the second one earlier on Tuesday, a few hours before the third.

Experts believe that the Supreme Leader’s presence could indicate that the technology has improved, with this being his first known appearance at a missile launch since March 2020. During the on-site inspection, Mr Kim called for the strengthening of the country's "strategic military muscle both in quality and quantity", Yonhap News Agency reports.

"While Kim probably unofficially attended other tests in the interim, this appearance and its Page One feature on Rodong Sinmun is important," Chad O'Carroll, chief executive of the Korea Risk Group, told Reuters.

He added: "It means Kim is not concerned about being personally associated with tests of major new tech and doesn't care how the US sees this."

The latest tests seem to be following up on Kim Jong-un’s vow to strengthen the military after talks with South Korea and the US had stalled.

Shortly before the session, the US and five other countries issued a joint statement calling on the North to refrain from "destabilising" actions, abandon its ballistic missile programmes and engage in "meaningful" dialogue toward denuclearisation.

North Korea state outlet KCNA praised the test, saying the "superior manoeuvrability" of the missile had been "strikingly verified through the final test-fire". Their report claimed the glide missile had made a 600km (375 mile) "glide jump flight," followed by 240km (150 mile) of "corkscrew manoeuvring" before hitting its target.

Unlike ballistic missiles, which travel in a largely predictable curve, making them vulnerable to interception, hypersonic ones can traverse laterally, close to the earth's surface and hit a target in a much shorter flight time.

Hypersonic weapons can also achieve more than five times the speed of sound, making them harder to track and intercept.