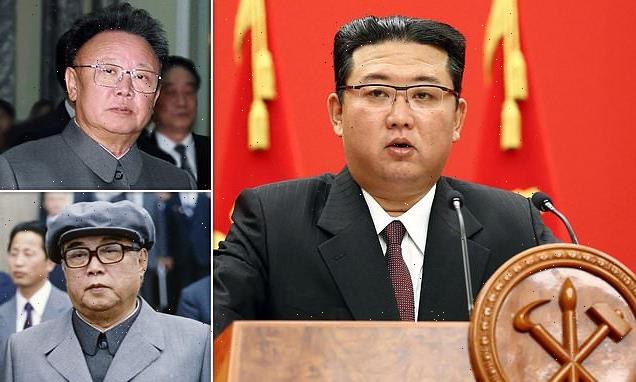 Kim Jong-un has removed portraits of his father and grandfather and is ordering officials to promote the ideology of ‘Kimjongunism’ as he bids to escape from the shadow of his ancestors.

The North Korean dictator, 37, has removed pictures of Kim Il-sung, the country’s revered founder, and his predecessor as supreme leader, Kim Jong-il, from official buildings in Pyongyang.

South Korea’s spy agency say the term ‘Kimjongunism’ is being promoted in government circles and Kim is being referred to in state media as ‘Great Leader’, a term normally reserved for his grandfather Kim Il-sung. 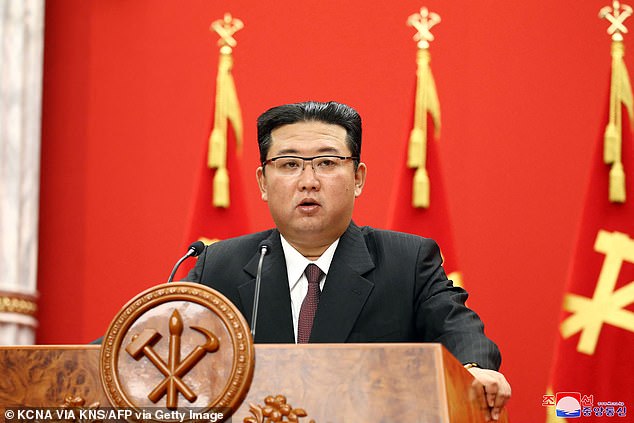 Humility for predecessors has been a staple of the Kim family dynasty and the move is unprecedented, experts said.

But Kim Il-sung did ban works by Karl Marx, Vladimir Lenin and Joseph Stalin in his own bid to sideline his ideological forebears and create his own legacy.

The new change suggests Kim is very confident of his grip on power just a month before the tenth anniversary of his promotion to ruler, The Times reported. 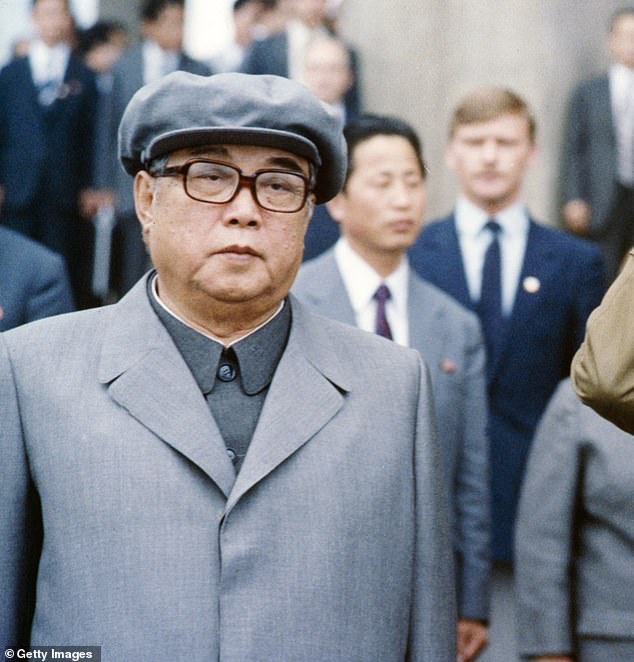 Kim Il-sung (pictured in 1984) banned works by Karl Marx, Vladimir Lenin and Joseph Stalin in his own bid to sideline his ideological forebears and create his own legacy

‘Kim Jong-un does not like certain aspects of the system that his father and grandfather have forged — specifically the one tying the successor’s legitimacy to his deference to his predecessors. The current leader wants to be his own autocrat.’

‘Kimjongunism’ has not been cited by official North Korean media but it has been detected by South Korean spies.

The National Intelligence Service briefed MPs in Seoul about the developments last week.

‘Kimilsungism’ was previously used to describe the ideology of Kim’s grandfather in the 1970s. 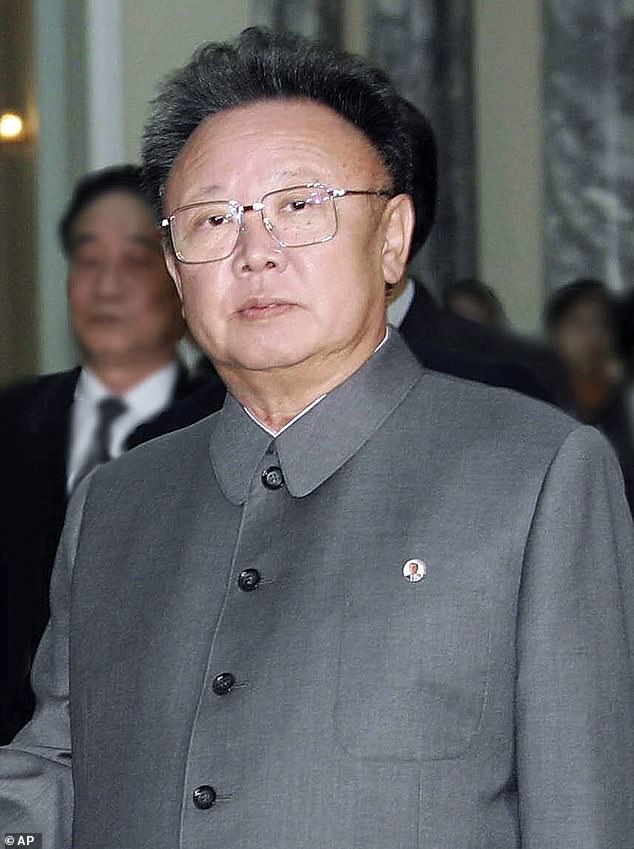 The North Korean dictator, 37, has removed pictures of Kim Il-sung, the country’s revered founder, and his predecessor as supreme leader, Kim Jong-il (pictured in 2005)

During the following decade, the term ‘Kimilsungism-Kimjongilism’ was used to describe the partnership between the country’s founder and his heir apparent.

Kim’s two predecessors’ belief systems also lend their names to flowers, leading to questions over what Kimjongunism will choose.

North Korean farmers have been sent to labour camps for withholding corn meant for state supplies and are being strip-searched by officials looking for hidden food amid a major shortage.

The Communist country’s harvest yields are expected to be around 20 per cent lower than usual this year after the Covid pandemic cut it off from Chinese imports of fertiliser, fuel and machinery.

Farmers are ordered to give 60 per cent of their crop to the government, keeping just 40 per cent, barely enough to live on. 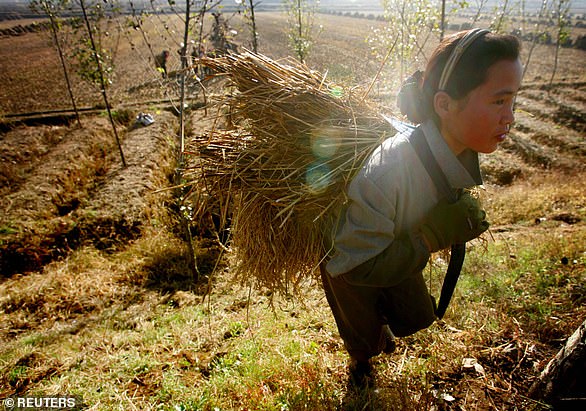 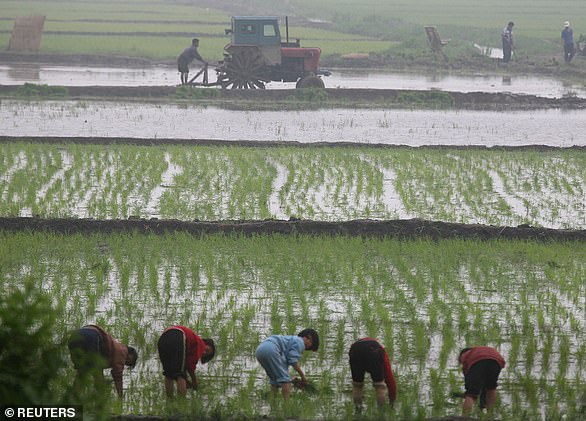 Amid the looming crisis, many farmers have been trying to cheat the system and hide their grain from government inspectors.

Other citizens have been ordered to carry out free labour every morning in an effort to stave off the crisis which authorities fear could result in the deaths of millions.

A source told RFA: ‘A few days ago, five farmers were caught hiding corn during an unexpected inspection. Each of them was sentenced to five months in a disciplinary labour centre.

‘Since each farm receives distribution based on yield, the amount of distribution for farmers will inevitably be reduced.’

Some North Koreans have been drafted in to carry out free labour in what the government has labelled the ‘rice sheaf transportation battle’.

After working in the fields all morning, they are then being body searched before they are allowed to head home. 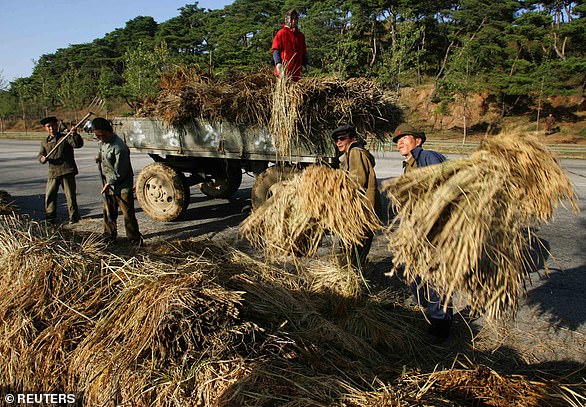 Amid the looming crisis, many farmers have been trying to cheat the system and hide their grain from government inspectors

Authorities are concerned they are taking grains of rice in their clothes meant for state redistribution.

One resident in Songchon county told RFA: ‘Residents have been helping the rice sheaf transportation battle at farms that have finished harvesting.

‘They must move the rice sheaves from the paddies to the thresher, hundreds of meters away.

‘The central committee has ordered that the harvest be completed in time so that not even a single grain is lost. This non-paid farmwork is being carried out from early morning until just before lunchtime.’

The mass mobilisation has led to family businesses facing a shortage of staff as people are being drafted in to stave off the food shortage.

In North Pyongan’s Unsan county, every single resident has been ordered to help with the transportation of grain.

After finishing the backbreaking work, their clothes and bags are inspected by bosses. 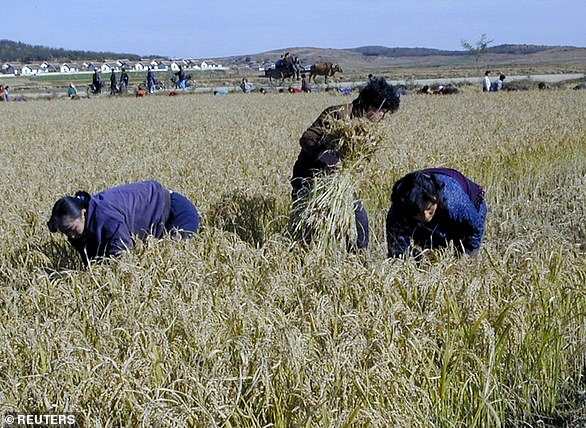 While North Korea has battled food crises for decades, the current shortage has been worsened by the decision to shut down borders and suspend trade due to Covid.

Food prices have since skyrocketed and the UN predicted recently the country would be 860,000 tons short of food this year, equivalent to two months’ consumption.

The UN World Food Programme also estimates around 40 per cent of the population is underfed.

Authorities have warned that shortages could continue until 2025 and ordered residents to start growing their own food.

They said the situation could be worse than the ‘Arduous March’, the 1994-1998 famine which killed millions.

It is expected that farmers will receive only five to six months’ worth of food next year, while soldiers and other recipients will receive their full normal share.

Most North Koreans have second jobs to top up their low government salaries, but farmers do not have the time, leaving them poor and now hungry.