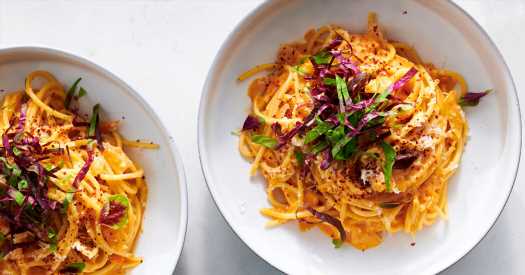 Elyse Inamine wrote about the complicated relationship Korean adoptees in America have with Korean food, with recipes from chefs. 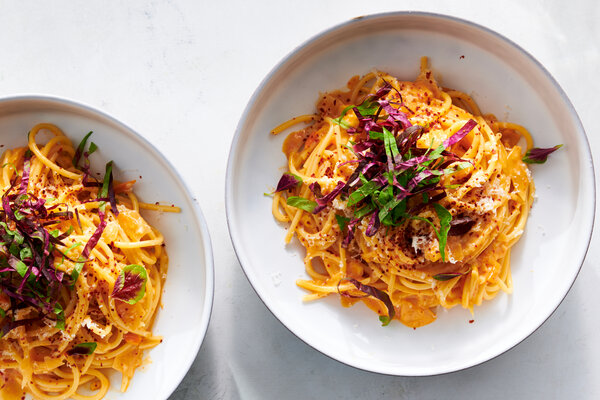 Good morning. For The Times this week, Elyse Inamine wrote about the complicated relationship Korean adoptees in America have with Korean food, particularly among those who’ve become chefs. “They’re coming to terms with a heritage they didn’t grow up with,” she wrote, “and enthusiastically expressing it through the vulnerable, public act of cooking for others.”

The recipes are terrific, and perfect for the coming days. There’s the kimchi carbonara (above) that the chef Melanie Hye Jin Meyer makes in St. Louis, for which she combines her Midwestern love of cheese with techniques and recipes she learned watching YouTube videos and TikToks. There’s the gochujang barbecue sauce that the chef Tory Miller developed in Madison, Wis., a smoky-sweet tincture that pays homage both to his family’s love of grilling and the place where he was born. (Try that with tendies!)

And then there’s the chef Peter Serpico’s hobak jeon, pan-fried zucchini he learned from his mother-in-law: floured, egg-battered with a whisper of fish sauce then fried, served alongside a sweet-salty dipping sauce. That sounds prime for dinner, maybe with some Korean fried chicken or cauliflower to follow. (One of the rules around here: If you’re going to fry, fry everything.)

Other things to cook in coming days include summer squash casserole and cheese enchiladas, pasta alla Norma (sorta) and shrimp fried rice. I love this cumin-roasted salmon with cilantro sauce, as I do this dulce de leche icebox cake. And I absolutely want to make Meera Sodha’s chicken curry.

Go visit New York Times Cooking for more inspiration. (Or check us out on TikTok, Instagram and YouTube.) You do need a subscription to access the recipes, it’s true. Subscriptions support our work and allow it to continue. If you haven’t already, I hope you will consider subscribing today. Thanks.

Now, it’s many miles from anything to do with red cabbage or caraway seeds, but a subscriber put me on to “Midnight Riot,” a novel by Ben Aaronovitch. It’s Harry Potter for adults, set in and around the Metropolitan Police of London, and quite clever and funny, if also violent and spooky. It’s all-around an excellent summer read.

A child of mine alerted me to a show on Netflix I missed when it was released in 2016: “Last Chance U,” about the football team at East Mississippi Community College. Watch if you enjoyed “Cheer” or “Friday Night Lights.”

Some housekeeping: I managed to bungle the spelling of Neiman Marcus on Friday, putting the “i” in front of the “e.” Also, in writing about the life of the chef Helen Corbitt, who worked at Neiman Marcus, I said that she moved to Texas to manage a tearoom at the University of Texas. In fact, she moved to Texas to teach tearoom management at the University of Texas and there opened the tearoom she managed. Finally, on Sunday, I misattributed the origins of the celery Victor served at Inga’s Bar in Brooklyn Heights. While Sean Rembold is the owner and a chef at the restaurant, the dish is not his creation, but that of the restaurant’s head chef, Tirzah Stashko. Hail her! And do accept my apologies.

Finally, via Jon Pareles, here’s Rat Tally’s latest, “Prettier.” Jon called it “elegantly heartsick” in The Times, and I think that’s just about right. Listen to that a couple of times and I’ll be back on Friday.