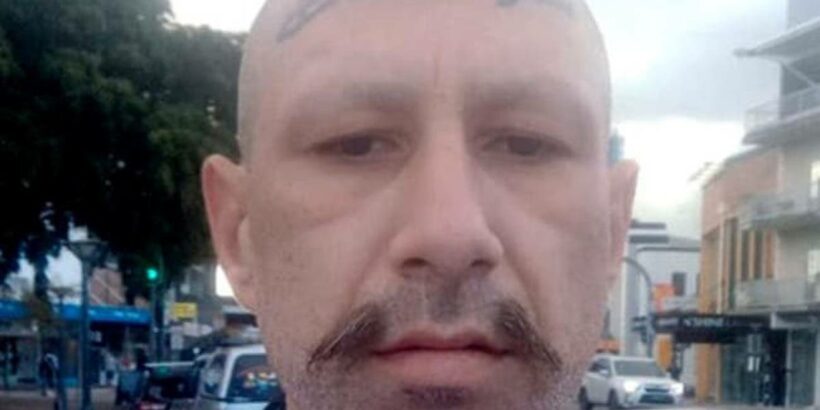 A Kiwi neo-Nazi and his friend robbed, threatened and bashed their roommate in a terrifying home altercation over a missing extremist T-shirt, an Australian court was told.

New Zealander Michael Shayne Halcrow and Gavin Daniel Menzies did not interact with each other and sat on separate sides of the dock during their sentencing at Brisbane District Court on Tuesday.

Both received jail terms of four and a half years but with time already served, they will be eligible for parole over the next month.

Halcrow, 41, who has long hair and a distinctive tattoo of the word “damaged” across his forehead, sat silently through proceedings.

Menzies, dressed in a black suit and sporting several face tattoos, did not react through the sentencing.

Halcrow, 38, also pleaded guilty to fraud, stealing, possessing dangerous drugs and utensils and failing to safely dispose of a syringe.

The court was told Halcrow, Menzies and the victim were living in the same home in East Brisbane in May 2019.

On May 10, the pair kicked down the door of the victim’s room demanding to know the location of a missing T-shirt depicting a Nazi swastika.

Crown prosecutor Michael Gawrych said the pair kept the victim in the room for hours, brandishing wooden batons while punching and abusing him.

It culminated in Menzies, 41, pushing his thumb into the victim’s stitched wound, causing “immense pain” and demanding he get in a foetal position on the floor.

Gawrych said the pair stole the victim’s phone and tablet, which were later pawned.

When police arrived, Menzies threatened to bash the victim’s skull in if he did not stay hidden.

“It was thuggish behaviour over a T-shirt,” he said.

The victim barricaded himself in the room, too scared to answer the door when policearrived.

Officers found drugs, utensils, a used syringe and Nazi paraphernalia when they searched Halcrow’s property in September that year.

Gawrych said Halcrow had also stolen a bicycle and helmet in April 2019, which were pawned.

During interviews, Halcrow denied his offending but Menzies made admissions to police.

The court was told the items had different meanings for Halcrow, who is from New Zealand.

But Judge Michael Byrne rejected the claim after seeing multiple photographs of Nazi paraphernalia that were found at his home.

He clarified it was not an offence to own the material and Halcrow was not being sentenced for any perceived affiliation to neo-Nazism.

“It does provide a background as to why the offending occurred,” Judge Byrne said.

“The extent of the material showed you had some interest in the area but you’re not being sentenced for that.”

Halcrow told a psychiatrist in February this year that he did not affiliate with neo-Nazism.

His defence lawyer, Cecelia Bernardin, said her client had a lesser involvement than Menzies and was using methamphetamine daily at the time.

“He does accept the offending would have been a very terrifying experience,” she said.

She said Halcrow suffered from depression and PTSD and had struggled after separating from his partner and losing a friend who took his own life.

Nick Bennett, acting for Menzies, said the offending came in the backdrop of traumatic events in his life.

He said Menzies was thrown into an open fire by his father when he was young, resulting in his parents’ separation, and he was exposed to heavy drug use and criminal activity through his life.

“By Grade 8 he was using heroin and was expelled in Grade 9. He hasn’t returned to mainstream education since,” Bennett said.

Judge Byrne sentenced both men to four and a half years’ jail with a non-parole period of 18 months.

Their time in pre-sentence custody since 2019 was declared as time served.