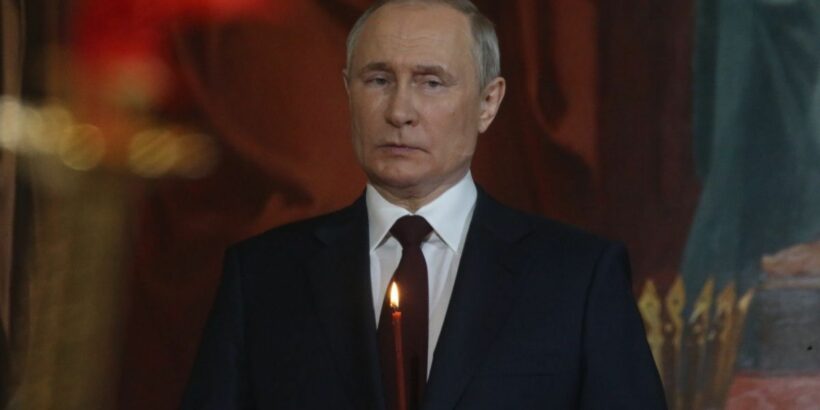 Putin's hand appears to shake before he meets with Lukashenko

Since the beginning of the conflict in Ukraine, rumours have circulated about the ill health of the Russian President, who prides himself on his strong, healthy and powerful image. Some have even suggested that his ill health may be why he launched the invasion of Ukraine, which Moscow has called a “special military operation”.

Speaking about the supposed fake footage, investigative media organisation Agentstvo said: “In the broadcast of the Easter service from the Cathedral of Christ the Saviour, Putin seemed to disappear for a moment.

“This happened during the switching of shots, from a close-up with the president to a more general one.

It added: “The place where Putin should be seems to be empty.”

Telegram channel Mozhem Obyasnit urged followers to “spot the difference” between Putin this year and last.

A post said: “Putin-2022 at the service in the Cathedral of Christ the Saviour is almost indistinguishable from Putin-2021.

“Social media users, having studied the photos, doubted that the President attended a public event.”

It added: “Putin has the same hairstyle, almost the same facial expression, the same candle.

“Both are on the same background in the same aisle of the cathedral.”

The post continued: “True, in 2021, Putin was sometimes shown against the backdrop of parishioners and priests, but this year, for some reason, they did not do this.”

Putin was pictured with the Mayor of Moscow, Sergey Sobyanin, and both men are wearing identical outfits to what they wore on May 2 last year.

The Village, a Russian news outlet, said: “Putin is standing in the same suit and with the same candle as on May 2, 2021.

“This is evidenced by a photo report from the temple on the Kremlin website.”

Rumours about the Russian President’s ill health were fuelled even further when Putin met with Moscow’s defence minister, Sergei Shoigu, and appeared to be gripping the table in front of him, grimacing as if in pain and slouching in his seat.

He said: “I am persuaded by a lot of medical advice that he is an ill man and the most persuasive diagnosis is that he has early Parkinsonia.

“I happen to live with a clinical neurological psychologist – my wife – who has spent 30 years dealing with people who have had degenerative brain diseases.”

He added that sufferers of the disease tend to show “all or no thinking” and they no longer take in information in a rational manner.

On Sunday, footage was released of the President meeting his Belarusian counterpart Aleksandr Lukashenko that appeared to show his hand holding his chest with the other clenched in a fist and as he greets the Belarusian President, his hand appears to move in a way similar to a spasm.

Visegrad24, which first published the footage, said that it was “probably the clearest video of something being wrong with Putin’s health”.