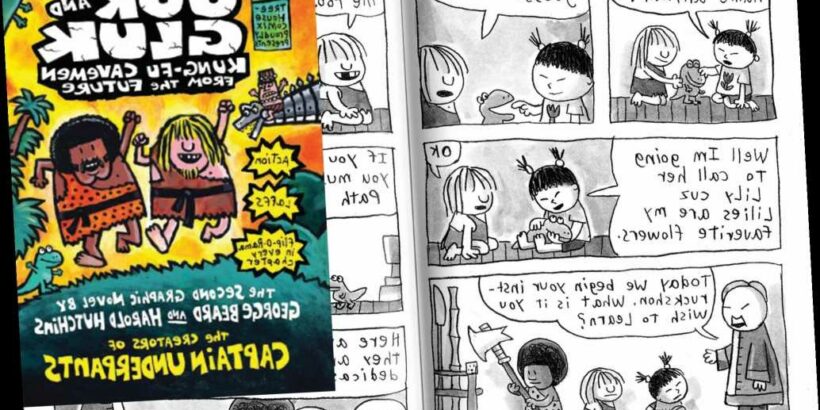 First they came for Seuss. Then, Ook and Gluk. The Cultural Revolution in our midst.

It’s a story about two cavemen buddies — one black, one white — traveling through time and space to fight an evil corporation stealing natural resources from their hometown of Caveland, Ohio. Along the way, they meet Master Wong, who teaches them Kung fu and imparts nuggets of Chinese philosophy, knowledge and training that they eventually use to defeat their nemesis and save their village.

In a world that values cultural pluralism and inclusivity, “The Adventures of Ook and Gluk: King-Fu Cavemen From the Future” should be widely celebrated and beloved. Indeed, the 2010 children’s graphic novel spent 33 weeks on the New York Times best-sellers list. But today, cancel culture has come for the scalps of Ook and Gluk — for apparently “perpetuating passive racism.”

In an announcement made last week, Scholastic, with the support of author Dave Pilkey, best known for his “Captain Underpants” series, said that it had removed the book from its websites, stopped fulfillment of any orders (domestically or abroad), contacted their retail partners to explain why this book is no longer available, and sought a return of all inventory. Plans have also been made to inform schools and libraries to pull the books from circulation. For now, if you want to snag a copy, you will have to fork out several hundreds of dollars on eBay for the new literary contraband.

All this because of a Change.org petition started by Billy Kim, a Korean-American father of two, who demanded an apology after borrowing “The Adventures of Ook and Gluk” from a library. He complained that the book traded in “racist imagery and stereotypical tropes,” specifically singling out the “Kung Fu master wearing what’s purported to be a traditional-style Tang coat, dashes for eyes for the Asian characters, stereotypical Chinese proverbs, and a storyline that has the Kung Fu master rescued by the non-Asian protagonists using their Kung Fu skills.”

Would Mr. Kim prefer that our biracial protagonists leave Master Wong to die? Is he ignoring the fact they save him with skills the master taught them?

No other export of Chinese culture and identity has arguably been this successful at facilitating cultural exchange and understanding between the Far East and the West. It elevated Bruce Lee and Jackie Chan to household names and was so transcendent that it inspired the Wu Tang Clan. American kids of all creeds and ages continue to learn Kung Fu and its many variations, accompanied by tenets of Chinese philosophy that promote self-empowerment and self-restraint, even in the face of violence. Decrying Master Wong in his traditional garment as a trope is just a cynical, self-important move that is completely divorced from reality.

Mr. Kim’s petition misses the forest for the trees. Master Wong is a prime example of a positive portrayal of an Asian character in literature, and just like Mr. Miyagi in the Karate Kid, he comes across as endearing and full of wisdom, wisdom that he communicates via “stereotypical Chinese proverbs.” What could be more representative of Chinese culture than Chinese proverbs?

Wong teaches Ook and Gluk that “the wisest warrior wins without a battle,” and advises them “to walk the path of peace.” How can this be interpreted as a bad representation of Chinese philosophy? Or be seen as encouraging passive racism? The characters are in awe of him and his lessons.

Another objection is the lines used to represent Wong’s eyes. While I understand the hyper-sensitivity to it in the West, I’ve seen Han Chinese artists use lines in lieu of eyes — and monolids are a defining feature of Asians. The author’s intent is not racial malevolence.

In a groveling apology that harkens to a forced confession extracted from a Maoist struggle session, Pilkey explained that he had “intended to showcase diversity, equality and non-violent conflict resolution.” He had, in my view, succeeded, but not in the eyes of Mr. Kim and the 289 petition signatories.

Why did it take less than 300 people to cancel Ook and Gluk for everybody else? For Scholastic to cease distribution of a popular book that had a sequel in development? This comes right on the heels of the announcement that six Dr. Seuss books will no longer be published for similar reasons, and part of a larger moral panic that is ignited by media narratives surrounding the recent spate of anti-Asian crimes.

Mainstream media has mostly pinned the allegedly white supremacist, anti-Asian “Kung Flu” rhetoric from the previous Trump administration as the main driver of on-going anti-Asian hate (unlikely to those who have eyes and can see who is perpetuating these crimes and where), fomenting a climate that is extra-sensitive to any book, film, news article and speech that can be construed as remotely stereotyping towards Asians.

This is how two esteemed children’s authors known for their messages of pluralism and tolerance have had their works canceled for racism in recent weeks. Media narratives shape perceptions, and perceptions can shape reality, which is exactly how a small group of race-baiting activists can exert such an outsized influence on our institutions.

In a closing monologue on “Real Time” weeks ago, Bill Maher weighed in saying “you know who doesn’t care that there’s a stereotype of a Chinese man in a Dr. Seuss book? China. But the left cares very much. It’s another opportunity for performative outrage, which fuels the media business and another opportunity to construct the facile illusion of an irredeemably bigoted country in need of total scrubbing. It’s hardly the end of the world, but ceding the left’s argument that several Dr. Seuss books are so racist they should no longer be printed sets a standard.”

He’s absolutely right. We don’t need the firemen that Ray Bradbury described in “Fahrenheit 451” to carry out book burning. There’ll be no books to burn when publishers and authors cancel their own books, seemingly on their own volition, but really because of Twitter mobs and busybody Change.org petitions. And there’ll be no books to read when writers, who will learn to anticipate market power, resort to self-censorship.

If only the cancel mob had internalized the profound message that Master Wong conveys to Ook and Gluk of the need to see past surfaces in order to know what is real in themselves and others. They might actually have abandoned their mission.

Melissa Chen is the US editor of The Spectator.