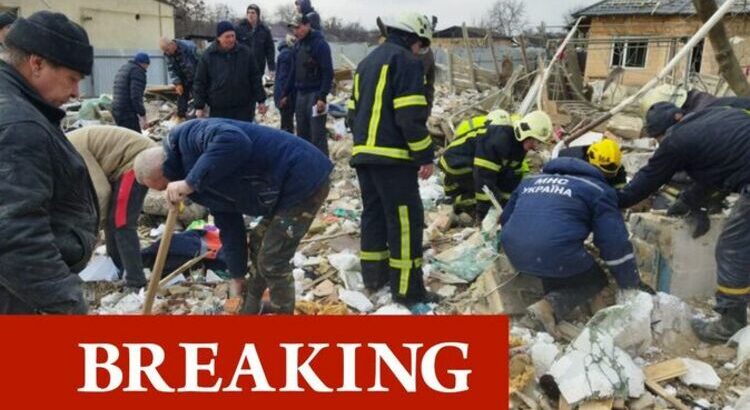 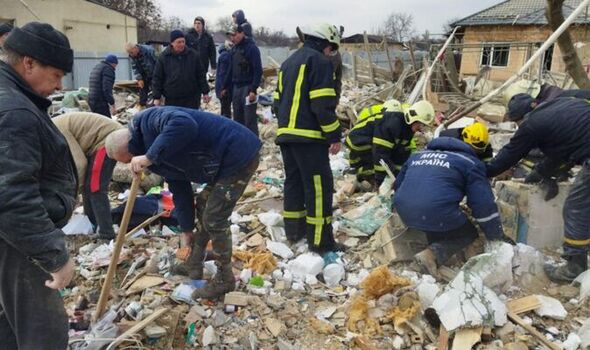 The attack is said to have taken place in Markhalivka, a rural community in the Kyiv oblast, to the south-west of the city. Ukraine’s National Police said that a further two adults and two children had been hospitalised.

It added that the airstrike destroyed two houses completely, and damaged a further nine.

It said that as of 4pm this afternoon (Friday), “police and rescuers are working on the scene.”

Further information is expected to be released, the force said.

The Russian military has stepped up its offensive on Ukraine, including heavy missile bombardment of the capital Kyiv.

The US Embassy in Kyiv this afternoon described the shelling of the power plant as a war crime in itself, adding that it takes Vladimir Putin’s “reign of terror one step further”.

Ukrainian armed forces and civilians have held off the invading troops, but have reported tragic casualties as a result of Russian attacks.

Western allies fear it is a sign of a shift in Putin’s tactics towards the indiscriminate targeting of urban areas.

Ukraine is also suffering a humanitarian crisis, as workers attempt to get medical supplies into the country.

Meanwhile, as many as a million people are estimated to have fled since the start of the conflict last Thursday.

On Wednesday, Boris Johnson told the House of Commons that Russian bombing of innocent civilians “already fully qualifies as a war crime”.

Yesterday, the Government announced it had joined 37 other allies in referring Russia to the International Criminal Court – the “largest ever”.

The Prime Minister said: “We are crystal clear that Putin cannot commit these horrific acts with impunity.”

“An investigation by the International Criminal Court into Russia’s barbaric acts is urgently needed and it is right that those responsible are held to account.

“The UK will work closely with allies to ensure justice is done.”

At least 331 civilians are confirmed killed and 675 injured in Ukraine, according to the latest UN figures.

Today, Ukraine’s foreign minister said that there had been reports of Russian soldiers raping Ukrainian women in occupied towns.

Dmytro Kuleba said he was aware of “numerous cases” as he joined calls for Putin to face a trial for his actions.

Strikes that damaged the Babi Yar Holocaust memorial in Kyiv and the central square in Kharkiv have also incited fierce condemnation worldwide.

On Tuesday, the ICC announced that it would investigated potential war crimes committed by Russia as part of the offensive.

Karim Khan QC, the ICC’s prosecutor, said that “there is a reasonable basis to believe that both alleged war crimes and crimes against humanity have been committed in Ukraine”.

However, Putin has maintained the claim that Russian forces have been responding to aggression on the part of Ukraine.