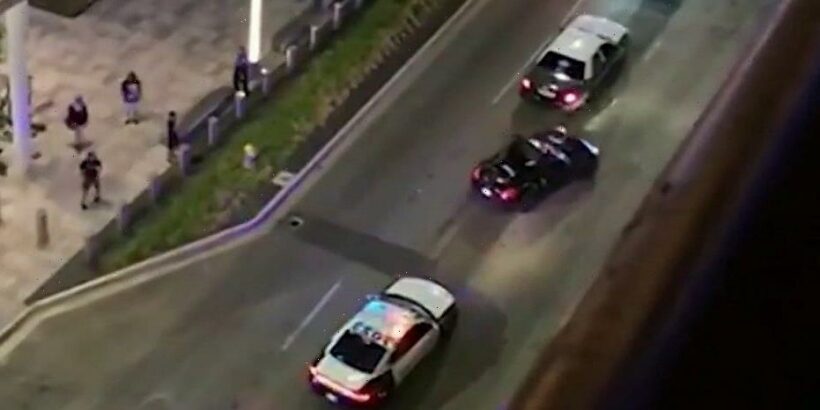 Street racing on the rise in Dallas amid COVID pandemic

The Los Angeles City Council voted Tuesday to crack down on illegal street racing throughout the city amid an increase in dangerous speeding in the San Fernando Valley.

Councilwoman Monica Rodriguez, who introduced the measure last month, noted that street racing “generally occurs over a short section of a wide, straight local road with low levels of traffic volumes and easy access to freeways.”

To combat that, Tuesday’s motion will instruct the LAPD Street Racing Task Force and LA Department of Transportation to examine how traffic-calming measures like “speed humps, rumble strips, raised center medians, curb extensions, and traffic circles” can be used to stop street racing.

The LAPD said last month that 437 people have been arrested so far this year in connection with illegal street takeovers and racing.

Richard Cartier, the uncle of a woman who was killed when a Lamborghini crashed into her at 106 mph in February, said it’s “comforting” that city officials are taking some action to cut down on racing and dangerous speeding, but stiffer criminal penalties need to be in place for those who are caught.

“If there’s no justice here, there will be no justice for anybody, because it can happen to anyone,” Cartier told Fox News on Tuesday. “It just takes our breath away. The family has not grieved the way they should be grieving. We have not slept the way we should be sleeping.”

Prosecutors said in court that the 17-year-old Lamborghini driver was “racing” a female friend right before the crash, but the teen’s attorney has denied that claim, the Los Angeles Times reports.

The 17-year-old driver pleaded guilty to vehicular manslaughter in April, but will be tried in juvenile court due to Los Angeles County district attorney George Gascón’s policy against trying any juveniles as adults.

The teen is due back in court on Oct. 13 for sentencing, according to his attorney, Mark Werksman.

Just last month, three people were killed in a car crash in Burbank that resulted from street racing.

One of the drivers involved, 19-year-old Hamlet Arseni Aghajanyan was charged with three counts of murder and one count of reckless driving.

Another driver, a 17-year-old minor, was arrested and is in custody at a juvenile detention center on three counts of murder and one count of reckless driving, pending a review by the Los Angeles District Attorney.

“This tragic and avoidable event was caused by subjects racing vehicles and driving recklessly at very high rates of speed,” the Burbank Police Department said in a statement on Aug. 19.

The Los Angeles County District Attorney’s Office did not immediately respond to a request for comment Tuesday.