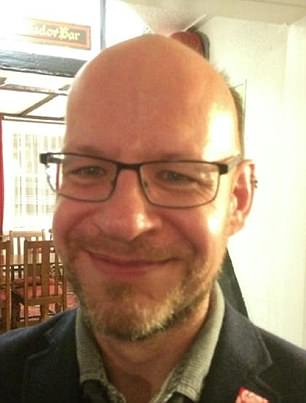 David Lewis told party officials he is a woman from when his alarm goes off at 6.50am until midnight each Wednesday

A male Labour activist has been suspended after claiming to be a woman one day a week in order to stand for a party equalities job.

David Lewis told party officials he ‘self-defined’ as a woman from when his alarm goes off at 6.50am until midnight each Wednesday – insisting ‘if I say I’m a woman, I’m a woman’.

The stunt was intended to highlight flaws in Labour’s rules on who could bid to be a women’s officer.

But the party has responded by suspending Mr Lewis for ‘subverting’ the process.

A Labour spokeswoman said: “The Labour Party is committed to upholding the principle of affirmative action for women.

‘Anyone attempting to breach Labour Party rules and subvert the intention of All Women Shortlists, women’s officers or minimum quotas for women will be dealt with via our established safeguards, selection procedures and disciplinary measures.”

The Labour rules are intended to protect the right of trans members who have not legally changed gender, but have been criticised by some feminist activists for undermining women.

Mr Lewis had told his Basingstoke constituency party he was standing for the local women’s officer role to highlight the problems.

He said he wanted to ‘inform the constituency Labour Party, and maybe some other people, about what this policy means, about what happens when you say that someone’s gender depends only on what they say and nothing else’.

Mr Lewis added: ‘Anyone else’s criticism or questions about my gender identity are just not relevant to the Labour Party at the moment, given the current policy.

He told the Spectator, which revealed his candidacy, he did not expect to win the contest and hoped Basingstoke members would be ‘sensible’.

Dr Sarah Rutherford tweeted: ‘I appeal to transactivists to understand, from this example, why so many of us are concerned about the move for self ID’

Barb Jungr said: ‘Dear UKLabour I am cancelling my membership you have lost the plot.’

The apparent decision to let Mr Lewis onto the ballot has proved controversial online.

Dr Sarah Rutherford tweeted: ‘I appeal to transactivists to understand, from this example, why so many of us are concerned about the move for self ID.

‘It is already making the sex category of woman meaningless.’

Barb Jungr said: ‘Dear UKLabour I am cancelling my membership you have lost the plot.’

What are Labour’s rules on women-only jobs?

David Lewis appears to have qualified for a women’s office post because of  Labour’s rules on gender-specific positions and party guidelines on self-identification.

The idea is to protect the right of trans members in Labour who have not legally changed gender but are criticised by some feminist activists for undermining women.

The rules state: ‘The Women’s Officer is the key representative of women members on the executive of the CLP, and works to ensure that women are fully involved in the work of the local party, as well as, taking a leading role in making sure that the campaigning work of the constituency reaches out and engages with women voters.

‘As Women’s Officer, you need to be friendly and approachable, organised, able to run events and above all be prepared to work hard to ensure that women members have a real voice within the local party.’